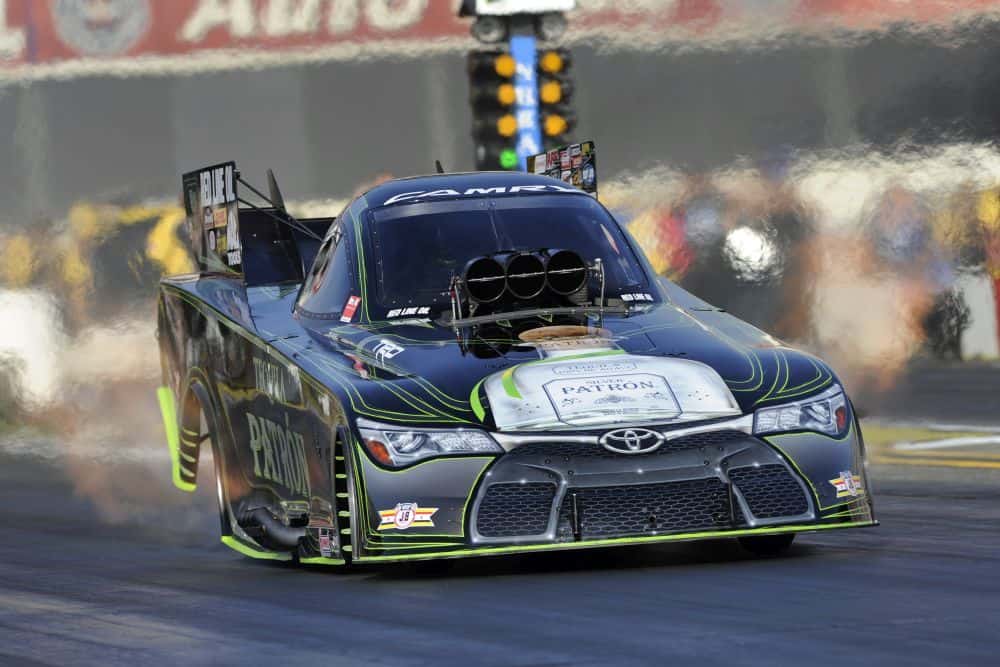 First order of business: We are LIVE at zMAX Dragway this weekend for the Carolina Nationals! Follow me, @ToniLMontgomery and @Frontstretch for updates and photos of all the action.

Where has 2016 gone? It seems the year was just starting fresh for everyone in Pomona and yet here we are, six races from the end, set to determine champions, as we head toward Pomona to wrap up the season. The Countdown kicks off this weekend in Charlotte with the Carolina Nationals.

The thing about the Countdown, whether you like manufactured excitement or not, is that it does create storylines. First, after running roughshod over the competition in Pro Stock all season, the KB Racing team has found itself with some stiff competition in recent weeks as its advantage has seemingly come to an end – just as a points reset eliminates their huge lead. The Pro Stock championship was NOT determined long ago folks. Bad for KB, good for everyone else in the class.

It can also be a good thing. For Leah Pritchett, it erased the missed races due to the loss of her full-time ride with Bob Vandergriff as she cobbled together the rest of the regular season with new sponsors in different cars. Her situation has solidified with Don Schumacher Racing and sponsorship, and she made the Countdown so she still has a chance at the championship that seemed to jump out of her grasp early in the year.

It also erased the missed races due to injury for Alexis DeJoria, the final driver to secure a spot in Funny Car. In the end, the Countdown makes missing races during the regular season less damaging to a team. Missing an event doesn’t automatically kill title hopes. That’s good for drivers who should take time to get healthy and good for teams that don’t have to stretch resources so thin they can’t ultimately be competitive anyway.

* Congratulations to Janet Swinson, the winner of our Frontstretch Countdown to the Countdown NHRA VIP weekend contest. Janet will be attending the Carolina Nationals this weekend in Charlotte and will get to meet her favorite Don Schumacher Racing driver, Matt Hagan!

2007 – Sidelined for end of season with serious injuries from an accident in September in Dallas.

1994 – Became (and still is) the winningest Funny Car driver in Funny Car history.

Some things most people don’t know about John Force: John Force is clearly not ready for retirement yet. He says with his girls out on the circuit, he’d have nothing better to do besides be at the track anyway, and if he’s going to be at the track, he might as well race. He’s still out there winning, so if it’s not broke…John Force is the oldest NHRA series champion, capturing the 2013 title at the age of 64 years and six months. As of 2016, he’s also the oldest NHRA event winner, taking the wins at both Denver and Sonoma, at the age of 67 years and two months.

John Force scored his first career victory nearly 30 years ago in 1987. He tells us about that first win in this week’s video feature.

Word of the Week: Countdown

The NHRA version of championship playoffs, the Countdown, starts this week. For this six-race final stretch, the top ten drivers in all four pro categories have had a points reset, distancing them from the rest of the drivers in the class so they can fight it out amongst themselves for the title. The tenth place driver’s points total is reset to 2000 points, with each driver above getting an additional 10 points through to first place who starts with 2090. The regular season champion (aka the first place driver) also gets a 20-point bonus for a total of 2110. Points are awarded in regular fashion at each race, but tightening up the field leads to closer competition and more drivers contending for the championship.