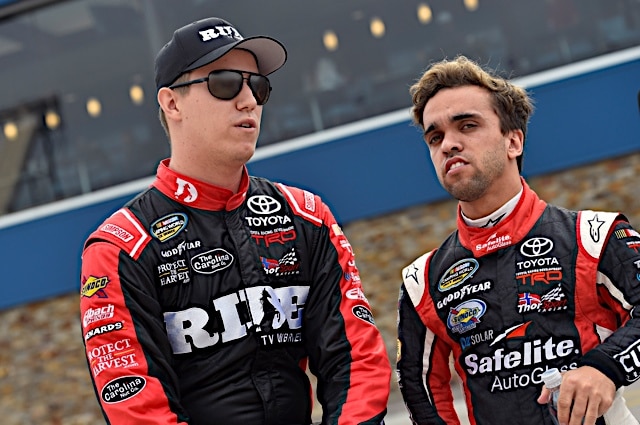 As the inaugural Chase for the Camping World Truck Series approaches, many drivers are in a must win situation heading into Chicagoland this Friday, the last race before the playoffs begin.

In recent months drivers such as Ben Kennedy and Christopher Bell have been victorious, stamping their name in the history books as part of the first playoff battle in the Truck Series. However, ThorSport Racing, two-time truck series champions in 2013 and 2014 with Matt Crafton have just one truck locked into the Chase leading up to Chicago.

In his second full-time season in one of NASCAR’s top divisions, Cameron Hayley is heading into the final race of the regular season 36 points out of a Chase spot. With no way of making the Chase on points, the Canadian driver must do something he’s never done before: win a race.

“I would describe it as a bit of a rollercoaster so far,” Hayley told Frontstretch of his 2016 season. “It’s not the season that we hoped for and not just for the No. 13 team, but for ThorSport as a company. We’ve had out struggles whether it be on the race track, off the race track or at race shop. When we’ve had nothing go wrong and had an uneventful day we finish at least in the top 5, if not a top 3. When we have something go wrong it seems like we finish 20th on back.”

In 2015 at Chicagoland, Hayley spent much of the day in the top 10 before running out of fuel with a few laps to go, finishing 16th. This season, he races on 1.5-mile tracks have been jumbled with good finishes and bad luck, though he recorded a season-best second-place finish at Atlanta in February.

After recovering from a fire in mid-June that destroyed 40 percent of the Sandusky, Ohio based fabrication shop, this week is the first that Hayley and crew chief Eddie Troconis are competing in a new truck. The fire was just one of the hurdles that the team overcame to currently place 10th in the championship standings.

“In the Truck Series there are 12 to 13 guys that can win and we have less spots in the Chase,” Hayley said. “If someone wins this weekend, it’s going to be all but one spot in on wins. It’s made it really difficult and shows the importance of winning.”

Hayley is in his first season working with Troconis. Through 15 races, the duo has picked up four top-5 finishes, along with eight top 10s. Getting to know one another on and off the race track has made 2016 a learning process for the No. 13 team, but they aren’t out of the Chase, yet.

“It’s really great,” Hayley said on the chemistry between driver and crew chief. “He’s someone I really like. We have fun everywhere we go, but when it’s time to get down and work he’s very serious and he takes his job very serious. I think that he’s a great leader and great leaders run teams well and that’s what he has done well at.”

Adding rookies Ben Rhodes and Rico Abreu to ThorSport Racing has been a bit of a learning process for Hayley as well. Though only in his second season in the Truck Series, he is looked upon as one of the veterans on the race team.

During the course of Hayley’s rookie season, he had 13 top-10 finishes. Statistically, 2016 looks as though it’s been a harder season, but the 20-year-old has more confidence than he did last year.

“There have been so many changes that were thrown at me so quickly last year that really this year my teammate Matt Crafton has helped me a ton to adapt to these longer race tracks and different tires,” Hayley explained. “My confidence level is up so much more from this year to last year knowing that I can win these races.”

Confidence is the number one thing that Hayley feels he has improved on since last season. He is the only part of the No. 13 team that remains the same from last year as every member of the pit crew is new.

The one time runner-up in the K&N Pro Series West and K&N Pro Series East is primarily thankful for team owners Duke and Rhonda Thorson. As ThorSport Racing has transitioned into one of the top teams in the garage producing four trucks each and every week, Hayley doesn’t believe he would be as competitive on a different team.

“They’ve been absolutely huge,” Hayley said of the Thorsons. “Without the help of Duke and Rhonda Thorson, I would not be top 15 right now in my second full-time season in the Truck Series. It’s been a whirlwind couple years and I hope to continue my relationship with them.”

Hayley has paced the field for 21 circuits in 2016, leading laps in the first four races. With his future up in the air, a win this weekend to qualify for the Chase could turn out to be a career-changing experience.

“I’m excited to get back behind the wheel,” Tifft said via a team release. “I’ve really missed being at the track, so I’m very happy to be back and able to race the No. 11 Tundra with BrainGear and Surface Sunscreen on board.”