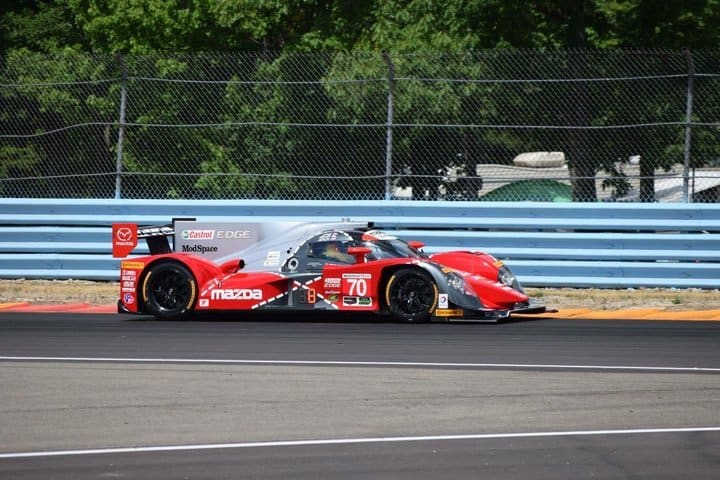 For Mazda Motorsports, Friday was a day that they’d rather forget.  The No. 55 lost the entire first practice session when the brakes locked up on the pit straight.  Meanwhile, the No. 70 was not all that great during the first session, lapping over two seconds off the pace of the leading Daytona Prototypes.

The second session was better in that there were no issues that brought the whole session to a stop.  The cars were faster, but still not quite there.

The relatively cool conditions of Friday morning saw the fastest laps of the weekend set and Mazda was right there to capitalize.  Joel Miller, driving the No. 70 Mazda, turned in a lap of 118.033 seconds (103.700 mph) 16 minutes into the session.  That lap held up to be fastest of all for the session.  Miller’s lap was more than a tenth of a second faster than Ricky Taylor in the No. 10 Chevrolet Corvette DP for Wayne Taylor Racing in second.  Oswaldo Negri, Jr. in the Michael Shank Racing with Curb-Agajanian No. 60 was third, followed by the two Action Express Racing DP’s for Dane Cameron and Jõao Barbosa.

In Prototype Challenge, the times were down as well and the margins close.  Showing some of the pace from Thursday, PR1/Mathiasen Motorsports‘ Tom Kimber-Smith turned in a lap of 120.238 seconds (101.798 mph) partway through the session to top the charts.  That lap was a quarter of a second faster than Starworks Motorsport‘s Renger van der Zande in second.  Starworks teammates José Gutierrez and Richard Bradley were third and fourth, while JDC/Miller MotorSports‘ Stephen Simpson was fifth.

GT Le Mans saw Risi Competizione stake their claim to the fast times early as Toni Vilander was fastest with a lap of 123.380 seconds (99.205 mph).  That was a little more than a tenth of a second faster than Ford Chip Ganassi Racing‘s No. 66 for Dirk Müller.  Teammate Richard Westbrook was third fastest.  Earlier in the session before Westbrook set that time, co-driver Ryan Briscoe had a spin on course.  The car was not damaged.  BMW Team RLL‘s John Edwards and Porsche North America‘s Frédéric Makowiecki rounded out the top 5.

Finally, GT Daytona saw the added power in the Porsche 911 GT3 R come to play.  Alex Job Racing-Team Seattle‘s Alex Riberas set the quickest time of the session with a lap of 127.116 seconds (96.290 mph).  That lap was two-tenths of a second faster than Magnus Racing‘s Andy Lally.  Team owner John Potter also showed some good pace during the session.

Qualifying is scheduled to start at 4:45 p.m. EDT Friday afternoon.  It can be seen at IMSA.com or at FansChoice.tv.