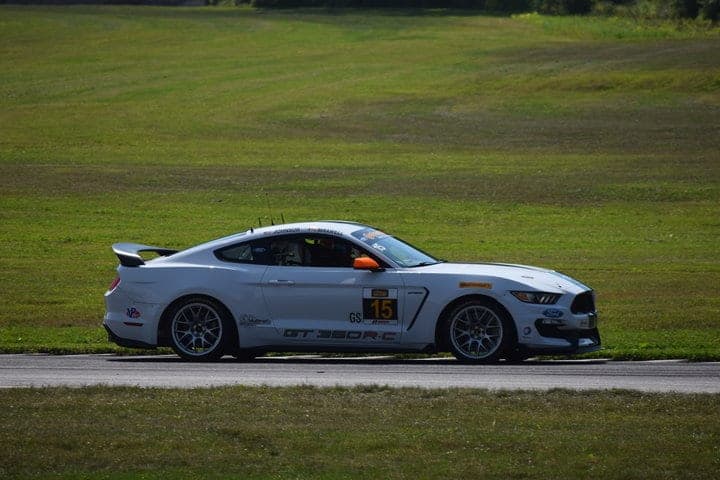 It seems to be a regular thing this year in the IMSA Continental Tire SportsCar Challenge.  Have a qualifying session and Multimatic Motorsports‘ Scott Maxwell plonks himself at the top of the sheets.  Thursday afternoon at Circuit of the Americas was no different.

Maxwell won the overall (and Grand Sport) pole for the Circuit of the Americas 150 Thursday with a lap of 143.439 seconds (85.332 mph).  It is Maxwell’s fifth pole of the year in nine sessions and the 15th of his career in the Continental Tire SportsCar Challenge, a series record.

Afterwards, Maxwell talked about the warm weather making it difficult to put down a good lap.

“The track was slippery with the heat, so the key was getting a fast lap early in the session,” Maxwell said to IMSA after the session.  “My first lap today was my quickest. I tried to do another fast lap, but I made a mistake and bailed on it. Sure, it would be great to win tomorrow, but our main task is to get a solid finish. If we can get on the podium, it will be a bonus.”

Maxwell’s lap was a little more than two-tenths of a second faster than CJ Wilson Racing‘s Danny Burkett in second.  Both Maxwell and Burkett put down their quick laps on their first timed laps.  Compass360 Racing‘s Paul Holton was third, but he was a full 1.5 seconds slower than Maxwell despite driving a near-identical Ford Shelby GT350R-C.  Automatic Racing‘s Charles Putman was another 1.2 seconds slower in the race’s lone Aston Martin in fourth.  Muehlner Motorsports America‘s Peter Ludwig was fifth in his Porsche Cayman GT4 Clubsport.

In Street Tuner, the cars are not quite as hard on the Continental rubber.  As a result, the teams could work their way up to their best possible time instead of having to put it down immediately.

Freedom Autosport‘s Mazda MX-5’s were fast early on, in a bit of a surprise.  Given their lack of power (and thus, top speed), they have to make time in the twistier parts of the track.

Later on, CRG-I Do Borrow‘s Sarah Cattaneo put her Nissan Altima at the top of the charts.  However, that time at the top was short-lived as BimmerWorld Racing‘s Tyler Cooke took his No. 84 BMW 328i to the top with a lap of 151.459 seconds (80.814 mph).  That time held up to give Cooke the Street Tuner pole.

There was a red flag during the session for the No. 75 Audi S3 from Compass360 Racing.  As per IMSA rules, you cause a red flag, you lose your fastest lap.  As the No. 75 hadn’t turned a lap to that point, they were officially not classified and will start from the rear.  Its already been a tough weekend for the team as they’re on their second engine in the No. 75.