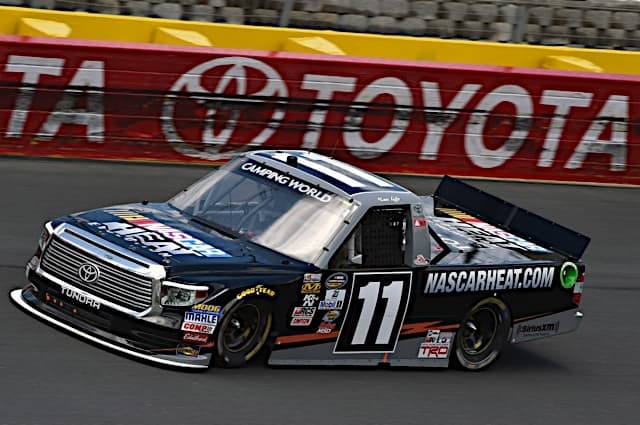 A familiar, smiling face has rejoined the NASCAR Camping World Truck Series paddock ahead of Friday’s American Ethanol E15 225 at Chicagoland Speedway, and he’s grateful for the opportunity to return.

Less than three months after undergoing surgery to remove a low-grade glioma in the brain, Matt Tifft returns to action in Red Horse Racing’s No. 11 Toyota in tonight’s NCWTS race, his first event since a May 21 NCWTS start at Charlotte Motor Speedway.

The start comes just 11 days after Tifft returned behind the wheel of a race car for the first time, testing a late model at Hickory Motor Speedway. After a successful test, Tifft’s return at Chicagoland was confirmed on Monday.

“Obviously we had a meeting at Bristol talking about getting back into a race eventually and so thankful that this is the weekend that we can do it,” Tifft said. “Chicagoland is one of my favorite tracks so I had a lot of fun yesterday. It was really great to be back in the truck, so looking forward to tonight and getting back in my first race.”

The Ohioan’s first track time came in two Thursday practice sessions, where Tifft finished sixth and 19th, respectively. The Toyota prospect admitted to soaking in the moment and taking a few laps to get reacclimatized.

“I radioed in after the first practice how much I had missed it,” Tifft said. “It’s interesting because even my late model test, it was at Hickory (Speedway) and Hickory is just a small short track for super late model – totally different kind of car. So, going the high speeds and going into the banking of a track like Chicagoland in a Truck Series event, it’s totally different than what you can prepare for on a short track. A lot of fun but also I had to be on my game just like any other driver has to be. It takes a lap or two for you to get used to it and I think by the second run out there we were running competitive times again. But, definitely, was soaking it in going around the first couple of laps.”

While Tifft’s been out, his No. 11 team has continued on through the last three months, fielding a variety of entrants including German Quiroga, dirt-track ace Jake Griffin and Brett Moffit, who brought the team a victory at Michigan International Speedway.

While he wasn’t behind the wheel for the success, talking to Moffitt and seeing his team excel leaves Tifft optimistic for the rest of the season.

“We talked a little bit,” Tifft said of Moffit. “I think the cool thing about the time that I’ve been out and what we saw change at Red Horse Racing was they got more and more competitive as we went. It was neat to see it too. I obviously wish I was in the truck but the direction Scott Zipadelli (crew chief) and I wanted to go, that’s the direction that they started moving from the competition side and I think obviously you saw worked pretty well.

“Between German (Quiroga) and Jake Griffin and Brett (Moffitt) stepping in the truck, they did a great job of bringing it up to speed. Now it’s my turn to step back in it and I’m going to do the best I can this weekend and going forward for the rest of the year I really think we’ll have some awesome trucks to work with.”