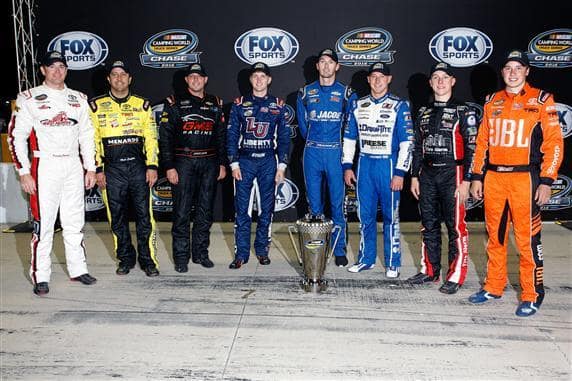 The 2016 NASCAR Camping World Truck Series Chase grid had is finally complete after the American Ethanol E15 250, and thanks to Kyle Busch’s win in the regular season finale, it looks the same as it did entering the weekend.

Six series regulars earned victories during the 16-race regular season, with two more drivers making their way into the Chase on points.

All three of NASCAR’s current manufacturers will be represented in the first playoff. Four Toyotas will contest for the title, with three Chevrolets and a lone Ford completing the field.

This will be the first year for the Chase in the Truck Series. The playoff format will echo the one seen in the Sprint Cup Series over the previous two seasons, with a scaled-back three-round, seven-race schedule. Eight drivers enter, with two drivers being eliminated after each of the first two three-race rounds. Drivers can advance themselves either by scoring the most points or notching a victory in any round.  The final championship round at Homestead-Miami Speedway will see the four remaining drivers compete in a race free of XFINITY Series or Sprint Cup Series regulars. The highest finisher of the four will earn the 2016 NCWTS crown.

It’s bad enough that the farce of a Championship system has been around in the Cup series since 2004. Now, “the big joke” has been inflicted on the truck series. Look at the “chase” schedule. Five of the first six races are companion races to Cup races. How many of those five races will have a Cup driver named Kyle in them. How many will actually be won by a series regular? Vegas is a given to be won by a series regular, as this is not a companion race. My bet is that all five of those other races will be won by a Cup driver. I guess the ban on Cup drivers running the final at Homestead will make it legitimate. How on earth can that brainless moron (France) seriously think this is a good idea? Talk about a total farce!

It’s because Brian is brainless. Just ask his wives.