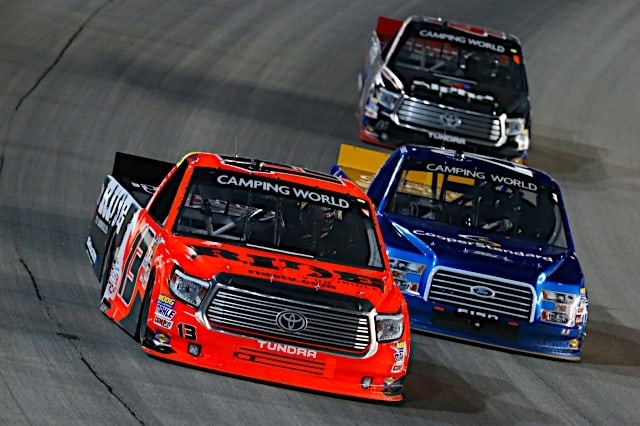 Would Cameron Hayley have wrecked Kyle Busch for a win and trip to the 2016 NASCAR Camping World Truck Series Chase?

Hayley found himself restarting outside of Busch in NASCAR Overtime in Friday’s American Ethanol E15 250, but the Canadian fell behind Busch when fourth-place Tyler Reddick  –who also needed a win to make the Chase– chose to make a move on Hayley instead of pushing him.

Hayley held Reddick off, but Busch and Daniel Hemric scooted by on the inside. They would duel for the win, with Busch ultimately holding Hemric off with a truck found to be too low in post-race inspection.

Hayley would finish just behind them in third.

“I shouldn’t admit this but I planned on running him really tight but I didn’t even get the chance because Daniel was behind Kyle, and I had Reddick behind me,” Hayley said. “And for whatever reason, Daniel didn’t want to win and didn’t pull out on Kyle. He just pushed him. Reddick was behind me swerving all over the place and didn’t push me. There was just no chance I’d even keep up with Kyle.

“If I had gotten there I would have held him tight but I just didn’t get any help.”

Interestingly enough, Hayley actually drove a Kyle Busch Motorsports chassis in the event. KBM was among the teams to offer assistance to ThorSport Racing after a fire in the latter’s shop resulted in heavy damage and a loss of resources. Sitting 10th in points after a pair of 24th-place runs at Gateway Motorsports Park and Bristol Motor Speedway, Hayley needed a win to have any chance at making the Round of 8 and competing for a championship.

His No. 13 team came close multiple times over the 16-race regular season, but never quite got the job done. Now they’ll have seven races to do nothing but go for wins and play spoiler for the Chase.

“I’m not really satisfied because a win was our goal and the championship was our goal,” Hayley said. “We’ve gotten super close — tonight obviously was like the fourth or fifth race we could have won — so I don’t feel like we’ve met our potential this year. We’ve been plagued with some issues that were out of our control, and we didn’t control them. But now that we’re out of the Chase we’re going to take chances and try to win some races.”

“I want to go out there and upset those guys and show that we belong.”

Kyle’s winning trucks seem to fail post-race inspections more than they should. Maybe if the win was taken away…