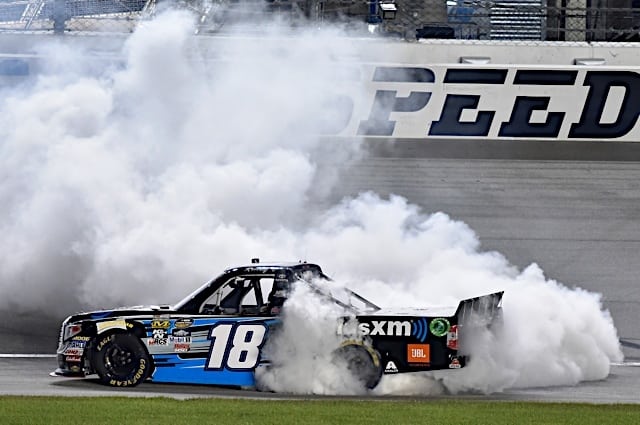 A plethora of NASCAR Camping World Truck Series drivers entered the regular season finale at Chicagoland Speedway desperate for a victory to secure themselves into the Chase. However, there was one major factor working against them.

Spencer Gallagher surged on restarts, Cameron Hayley rose on long runs and Daniel Hemric came within a few feet of Busch’s No. 18 Toyota Tundra, but in the end their efforts were futile as Rowdy roared to his 46th-career NCWTS win.

Busch fended off Hayley on the race’s final restart and held off Hemric’s late charge on the final lap to claim his second win and Kyle Busch Motorsports’ eighth triumph of 2016.

“(The truck) was pretty good there through the middle part and we had some decent runs there and we had some speed on the long run for sure,” Busch said. “The short run stints at the end, I had really good help from Daniel Hemric who gave me a boost on the restarts. Awesome job by him reading the hand signals was pretty cool.

“Great run by everyone on this SiriusXM Tundra – I can’t say enough about these guys at Kyle Busch Motorsports who work so hard and do such a great job for us. We’ve won some races in the last year, it’s nice to get back to Victory Lane and show our strength in the series.”

Hemric crossed the line within two tenths of a second of Busch to tally a career-best second-place result and clinch a spot in the Chase on points. Hayley missed the playoff with a third-place finish, with Christopher Bell and Johnny Sauter rounding out the top 5.

The final race before the inaugural Truck Series Chase brought with it plenty of drama, though most came in the race’s second half. Five-time winner William Byron got into the outside wall twice to force early yellows, with the Caution Clock expiring to cause a third.

As the race began to wind down, desperation built and the field slowly became more reckless, resulting in crashes that included drivers such as Matt Crafton, Ben Kennedy, Ben Rhodes and John Wes Townley.

In all, there were 10 cautions, including one in NASCAR Overtime that finally sealed the victory for Busch.

Hemric and Peters clinched their spots in the Chase on points after rallying to top 10s in the final laps. They’ll join Byron, Crafton, Nemechek, Bell, Sauter and Kennedy to compete for the championship over the final seven races.

I’m so sick of this punk ruining the lower series races, He comes in DOMINATES the races and SCREWS the younger guys that are regulars in that series. Daniel Hemric was already going to make the Truck Series Chase but without a win but Cameron Hayley needed a win to make the Chase and got SCREWED for his chance with that PUNK A** Kyle Busch stealing the show. It would have been nice to see Hemric and Hayley battle it out at the end for the victory.
Kyle Busch is TOTALLY RUINING THE LOWER SERIES ………
Nascar wants to make the lower series more interesting with having a Chase in those Series but the Cup Drivers are messing up the the excitement it could have in THE MINOR LEAGUES OF RACING.
BAN ALL CUP DRIVERS IN THE RACES THAT INVOLVE THE CHASE IN THE TRUCK SERIES AND XFINITY SERIES………

IMAGINE THIS HE HAS TO CHEAT TO WIN IN LOWER SERIES .

Please stop! I can’t stand the fact the Kyle Busch and other Nascar drivers get to drive against these other full time truck drivers who are working the butts off. I don’t think that the fans appreciate it either cause I know the powers that be are trying to get fans to come and see Kyle but looking at the seats Kyle’s not doing it and it’s just a bad idea. I think it’s time you decide to get all pro drivers out of each series trucks, xfinity, Let them race against each other. If you want to draw crowds then put all the Nascar Sprint cup drivers in trucks and call it a charity race but have cash, points, even a win for the chase, what ever. That should and would be fun to watch, showcasing the sport and sponsorship maybe involve the fans to pick a winner and they win money. Anyway I for one would watch the truck races more but as soon as I see Kyle or other Sprint cup drivers in the race I just don’t watch I know who’s going to win your letting Kyle Busch just pad his wins so he can make history but I wouldn’t be so proud of it driving against kids is no big achievement and with having the best equipment, team Nascar or his money can provide. Do you think a sixteen to 21 year old has millions laying around to be competitive, ya I don’t think so either so pull your head out and lets get real.

My favorite truck and xfinity races are the ones where they are at a different track than cup. Usually when KB is in a truck race I just turn it off. I wish something would be done about this as well. If nothing else put a limit on how many the cup guys can run in a season. Nobody wants to watch Kyle Busch dominate and win the last regular season race in a lower division. It would have been awesome to watch those truck regulars duke it out for the win.

I dont know when NASCAR will pay some attention to what the fans want.The fans are overwhellmenly against cup drivers competing in other series.KB cost someone a chase spot. Ridiculous.
It ruined the race. What a shame. Would have been an exciting race for chase spots if not for Busch, what’s his deal? these other guys race their tail off all year to make the Chase and he comes in and mucks up the deal. Don’t say to draw a crowd, cause there was no people there!
Not to mention Kyle Busch goes home with winnings so desperately needed by these small teams and that is nothing more than chump change to Kyle Busch.
If these cup drivers want to run they should be excluded from winnings and the points awarded to truck series drivers in order that they were the only ones running including being credited with the win. The cup drivers are always heavily sponsored, they don’t need the winnings.
I hope Nascar will figure that one out for 2017.
I know he wants to win 200 races, he ruined what would’ve been a very exciting race. I kept hoping one of those guys would just blatantly put him in the wall, I don’t think anybody would have cared. Then to top it off he did a burnout and celebrated his victory, stay classy Kyle.
Then to find out Kyle Busch’s truck was found to be too low in the rear in post-race inspection….
NOW HE HAS TO CHEAT TO WIN IN THE MINOR LEAGUES TOTAL B.S. !!!!!!!!!!