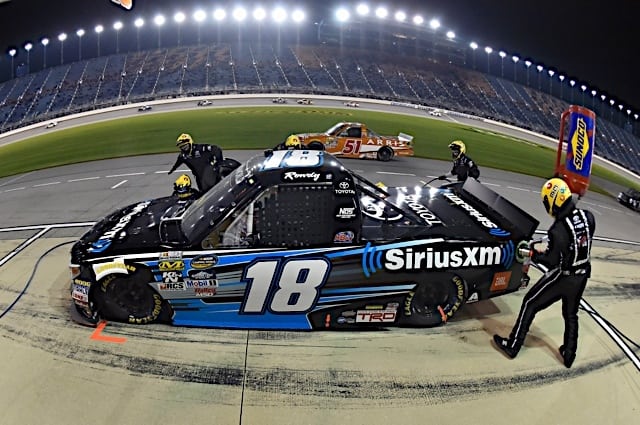 Kyle Busch did what he does best on Friday, dominated the NASCAR Camping World Truck Series field en-route to a victory in the American Ethanol E15 250 at Chicagoland Speedway.

However, this victory comes with a slight twist.

Busch’s No. 18 SiriusXM Toyota failed post-race inspection on Friday after the defending Sprint Cup Series champion tallied his 46th-career Truck Series win. The Kyle Busch Motorsports truck was found to be too low in the rear after the victory, though NASCAR didn’t announce the failure until the morning after the race.

The announcement should come with a bitter taste for Daniel Hemric, Cameron Hayley and the rest of the Truck Series field. Busch’s win denied Hemric and Hayley an opportunity to race for the a victory and subsequent spot in the inaugural Truck Series Chase on Friday night. The race served as the final event of the regular season, meaning that the Chase grid was set after the race.

Hemric still made his way into the Chase after his second-place finish. However, Hayley, who finished third, was locked out of the playoff field.

Any penalties related to Busch’s truck will be announced early next week by NASCAR.

Kyle cheats to win. Gotta get to 200 somehow. Who woulda thunk it?

…Does Brian see a problem with any of this? Apparently not!

No because he probably thinks he is so special for Nascar

The stands are full because of him.