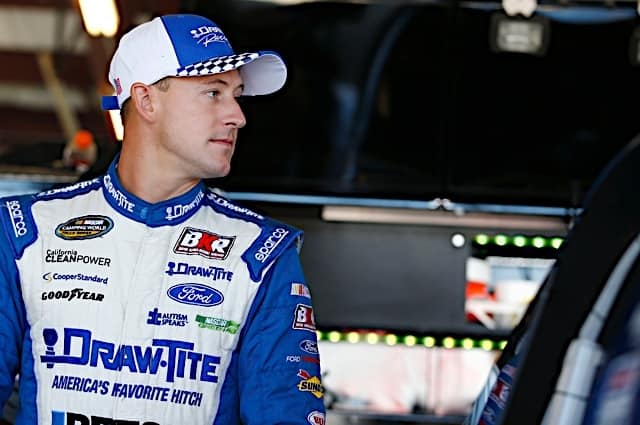 On Friday night, Daniel Hemric used a strong second-place run in the NASCAR Camping World Truck Series at Chicagoland Speedway to clinch himself into the Chase.

Less than 24 hours later, Hemric found himself standing alongside Richard Childress to announce a move up to the XFINITY Series in 2017.

Richard Childress Racing announced on Saturday that Hemric will join the team’s XFINITY Series stable full-time in 2017 as part of a multi-year deal. Hemric’s sponsor, crew chief and car number will be announced at a later date.

“This is such a great opportunity for me,” Hemric said in a team release. “There aren’t words that can describe what racing for RCR means to me, especially considering everything they have done as an organization for our sport. I’m excited to now officially be a small part of the company and am looking forward to working with everyone in Welcome, N.C. We will hit the ground running in February at Daytona. With all the talent and experience RCR has in the XFINITY Series, I’m confident we can compete for wins and contend for the championship.”

A native of Kannapolis, N.C., Hemric has competed and succeeded in numerous short-track series’ across the United States, earning championships in both the JEGS/CRA All-Stars Tour (2012) and Southern Super Series (2013).

Hemric made his way into the NASCAR ranks in 2015, running the full Camping World Truck Series for NTS Motorsports. The North Carolinian moved over to Brad Keselowski Racing in 2016, where he rose as high as second in points en route to a berth in the Chase. Hemric has 12 top 5s and 26 top 10s in 42-career Truck Series starts.

“Daniel has proven his talent with his numerous wins and championships throughout the years,” Childress said in a release. “He has had an impressive start to his NASCAR career in the Camping World Truck Series, and we’re thrilled to add his incredible talent to our lineup for 2017. I look forward to watching him contend for championships under the RCR banner.”