In a Nutshell: Kyle Busch took the checkered flag 0.139 seconds ahead of Daniel Hemric to score his second win of the season in Friday night’s American Ethanol E15 225 at Chicagoland Speedway. The driver of the No. 18 Toyota survived a 14-minute red flag and a flurry of late-race restarts to head to Victory Lane. Cameron Hayley, Christopher Bell and Johnny Sauter rounded out the top 5 finishers; in the point standings, no Chase bids changed hands as the field of eight was officially locked in.

Who Should Have Won: Ask any number of fans on Twitter and they’ll say it shouldn’t have been Busch, the prime example of a Cup driver who’s dominated NASCAR’s lower series in his spare time. But the reality is that Busch had the strongest truck all night long and was easily able to move out front. Despite the flurry of wrecks and late-race action, he held off all challengers and went on to score his fifth win at Chicagoland Speedway.

Winner’s Quote: “This has been a really good place for us at KBM (Kyle Busch Motorsports) over the years. We’ve been really fast here. It was nice to be able to come out here and keep that speed going with this SiriusXM Tundra. I really appreciate Erik Jones being here yesterday, working it in for me a bit, all the work the guys at the shop do. I can’t say enough about Toyota, TRD and JGR Engines – this engine ran really well today. Thank Camping World and of course the fans, too.

“It seems as though it was perfect timing as it just started spitting a little bit here. All in all a good day, but really important to see the Nos. 9 (William Byron) and 4 (Christopher Bell) make the Chase this year for KBM. Two opportunities there to go after a championship. Also, the No. 13 (Cameron Hayley) right there at the end, that’s a brand new KBM truck out of our stables, so that thing was fast – it was hard to hold him off at the end, he was really quick. Good job to those guys and finding speed in our stuff.”

Cole Custer entered Chicagoland one of several drivers needing a win to clinch a shot at this year’s inaugural Chase for the championship. The teenager was already frustrated; he likely would have won at Canadian Tire Motorsport Park if not for last-lap contact from John Hunter Nemechek.

Friday night, Custer started deep in the field in 17th but worked his way forward, only to get hit with a speeding penalty on lap 88 that sent him to the tail end of the lead lap. It’s a deficit from which many expected he might not recover.

Against the odds, Custer once again climbed inside the top 10 later when Spencer Gallagher got loose and scraped the outside wall. The driver of the No. 00 Chevrolet was forced to take evasive action, a move that resulted in left-side contact with Grant Enfinger. The fender was pushed in enough to cause a serious tire rub that ultimately ended in Custer being forced to pit.

Down, but not out, Custer recovered to finish ninth, which normally would have been a respectable finish given the different things he faced throughout the race. However, it wasn’t the win needed to put himself into the championship battle this year.

At least Custer can still walk away from Chicagoland knowing he’s headed to the XFINITY Series next season, competing in the new Stewart-Haas Racing machine.

While much of the focus this season has been on those drivers with a shot at making the Chase field, the back of the pack still features teams running on minuscule budgets, trying to simply make ends meet each week. Martins Motorsports is just one of those organizations, and it looked like driver Tommy Joe Martins was well on his way to a solid top-15 finish until contact with Daniel Suarez, who dropped like a rock through the field

Martins was none too please with Suarez after the wreck.

And who can blame him? Here’s this incredibly small team that works hard each week just to make it to the track and be somewhat competitive with those that run on budgets that are likely more than 10 times its own, and suddenly there’s a five-figure repair bill for the truck. It’s wrecks like those that end up forcing the smaller teams to the sidelines as the bigger teams continue to dominate.

“It was early and we got a little tight in the first couple laps,” he said. “I just put myself in a bad position getting passed and got loose underneath the [No.] 41 (Ben Rhodes), just something to learn from. We’ve had a lot of good races so far this year and that was kind of a bad experience but it was good to get out of the way and get ready for next week.”

No. of Rookies in the Race: 11 (add Josh Berry, Jesse Little, Matt Tifft and Ryan Truex)

2016 Chase Field:
The inaugural Camping World Truck Series Chase field is set. The battle begins next weekend at New Hampshire Motor Speedway, when eight drivers will fight through a three-round playoff. That group will be reduced to six, then four for the season finale at Homestead-Miami Speedway with a winner-take-all championship race.

William Byron will enter the Chase as the top seed, courtesy of a season-best five victories during the regular season. Matt Crafton and John Hunter Nemechek are the next two seeds, earning two victories apiece, followed by Christopher Bell, Johnny Sauter and Ben Kennedy, who each have one win. Daniel Hemric and Timothy Peters will bring up the rear of the Chase field, qualifying for the postseason on points. 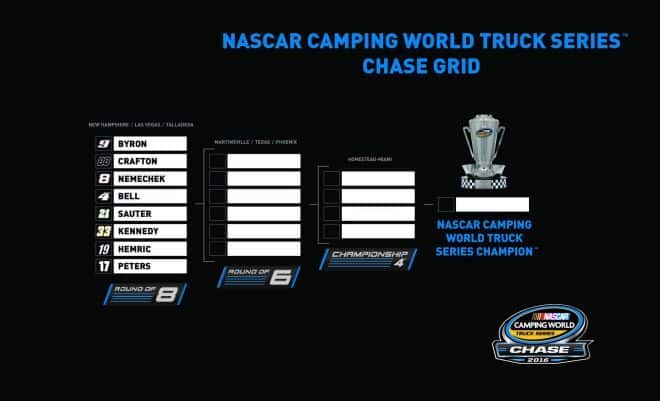 So close! Tried to give @KyleBusch a run for his money at the end. Thank you to @RideTV and @ThorSportRacing for giving me a shot.

More frustrated than anything tonight we were fast in our @WeberGrills #Chevy so glad to be in #TheChase though.

Tough night. The disappointment hasn't set in yet.Still had a great truck even after contact with the 33. 7good races left.All take,no give

Up Next: The Camping World Truck Series begins its inaugural Chase for the Championship with the Round of 8 at New Hampshire Motor Speedway next Saturday afternoon. Coverage for the UNOH 175 begins at 1 p.m. ET on FOX Sports 1; the race can also be heard on your local MRN affiliate and SiriusXM NASCAR Channel 90.

You might want to double-check your math on that … Matt’s surgery was July 1st. Six months would be January … Try more like 2 1/2 months …