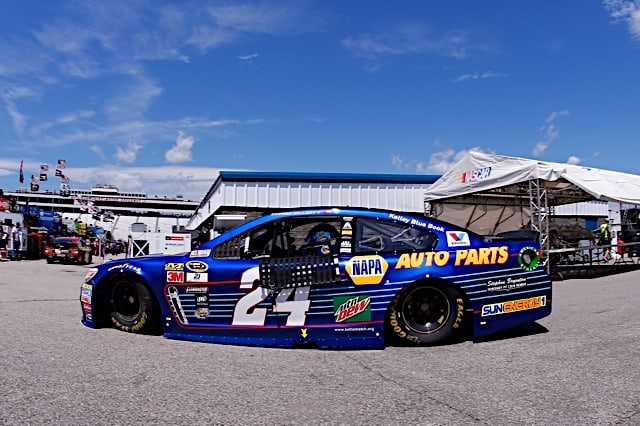 Chase Elliott wasn’t caught unaware by the late-race caution that costed him a victory in Sunday’s Teenage Mutant Ninja Turtles 400.

In fact, he expected it.

“Nothing is yours until it’s over,” Elliott said. ” I mean, that is part of life, man.  You are not dumb, we have all watched this stuff long enough we know these races don’t go green that long.  We see more cautions come out at the end of these races than we do not. That is just part of it, you’ve got to expect it and be able to embrace it and move forward.”

Elliott was leading with five laps remaining in Sunday’s race when a flat tire on Michael McDowell’s No. 95 Chevrolet forced a caution flag. In need of fresh tires to have any chance at holding onto his first win, the rookie brought his No. 24 Chevrolet to pit road, where his pit crew would lose him the top spot and, to an extent, the race.

Martin Truex, Jr.’s crew used a fast stop to push him ahead of Elliott, and from there the Furniture Row Racing driver would take advantage of his restart position on the outside lane to surge ahead of the three drivers that elected to stay out and claim his third win of the season.

Elliott would lose a spot to Joey Logano on the restart before rising to finish third.

“If one less guy had stayed out then we would have been fourth,” Elliott said of the stop. ” You never know how things are going to play out.  Obviously, you hate to lose a spot on pit road, but our guys did a good job all day.  They were solid and those are the kind of days we have to have on pit road.  We will take it as motivation and move forward.”

Elliott sits sixth on the Chase grid following his third-place result. Jeff Gordon’s successor will have nine more races to attempt to tally a victory in his rookie year and contend for his first Chase championship.