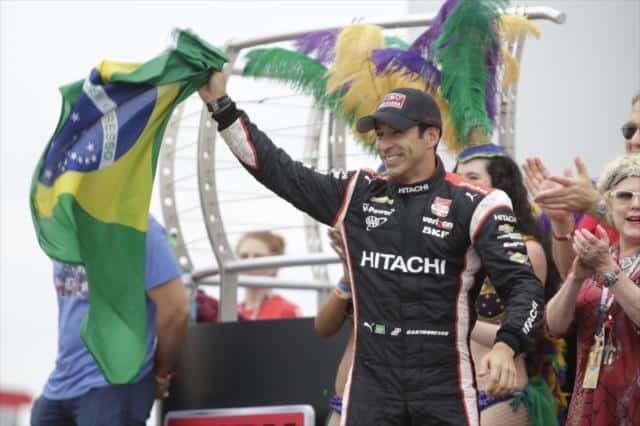 As the 2016 Verizon IndyCar Series season comes to a close this weekend at Sonoma Raceway, Helio Castroneves hopes to pull a win before the long offseason.

Wanting to win may not be unique, but consider this: Castroneves is riding a 42-race winless drought dating back to Belle Isle in June 2014. Though he stands as one of the series’ 40-or-older drivers, Castroneves doesn’t lack an ounce of competitive drive despite his longest winless streak between wins of his racing career.

“Sometimes things happen for a reason,” Castroneves said. “We had a few years with momentum on our side. You feel the taste [of winning], you know how it is and you want to do it again.”

Since his beginnings in racing, Castroneves has had many chances to soak up and enjoy victory. Receiving his first go-kart from his father, Castroneves started early.

“My dad used to love racing,” he said. “I used to watch racing with him while playing with my matchbox cars. He then gave me a go-kart, and from then on it was really cool. People in the neighborhood used to have go karts and I used to say ‘Man, that’s cool, I wish I could have one.’

“That great because for school, it created a different type of interest. The discipline was very good, my parents used that as a punishment if I didn’t do well in school. I thought… that set the pace of, “All right, if I don’t do well, I won’t get what I wanted.’ So it was perfect.”

After starting his karting career in England, it was the marketing decision of a sponsor that brought the Brazilian to the United States.

“It was just like other professions,” Castroneves explained.  “School for example, you go through different grades. If you do well, you keep going to the next one. And racing was similar to that.

“With that, you have to find sponsors, teams. It’s not only dependent on you, it’s becoming a business. I ended up racing in England and one of the sponsors said that their market was America. I said, ‘sure, that’s where I’m going.'”

Before he knew it, winning in the U.S. became natural, as he grabbed his first career win in the 2001 Indianapolis 500. Backing the crown up with another 500 win in 2002, Castroneves next eyed championships, suffering just one winless season from ’01 to ’14.

With Team Penske teammates Simon Pagenaud and Will Power battling for the championship in Sunday’s GoPro Grand Prix of Sonoma, the 41-year-old Castroneves will not earn his first series title this year, as he sits 104 points behind the top 2.

Coming off his fourth podium of the year at Watkins Glen, Castroneves is at an interesting point in his career, as doubt can easily find its way into his mind. Despite IndyCar’s heightened competition, much of which coming from his own team of Team Penske, Castroneves said he believes he has never wanted to win more than now.

“It’s amazing, you’re getting more experience that you start paying attention on details you never had before,” he said. “When you’re young, you just want to… ‘Ah, I got to win, I got to win, I have to perform and make it better!’ You forget about how you’re going to get better. How you want to perform, how you want to make a terrible situation into a very good situation.

“Today, I feel, with so much experience, you can actually turn things around. It helps a lot to be still battling for championships.”