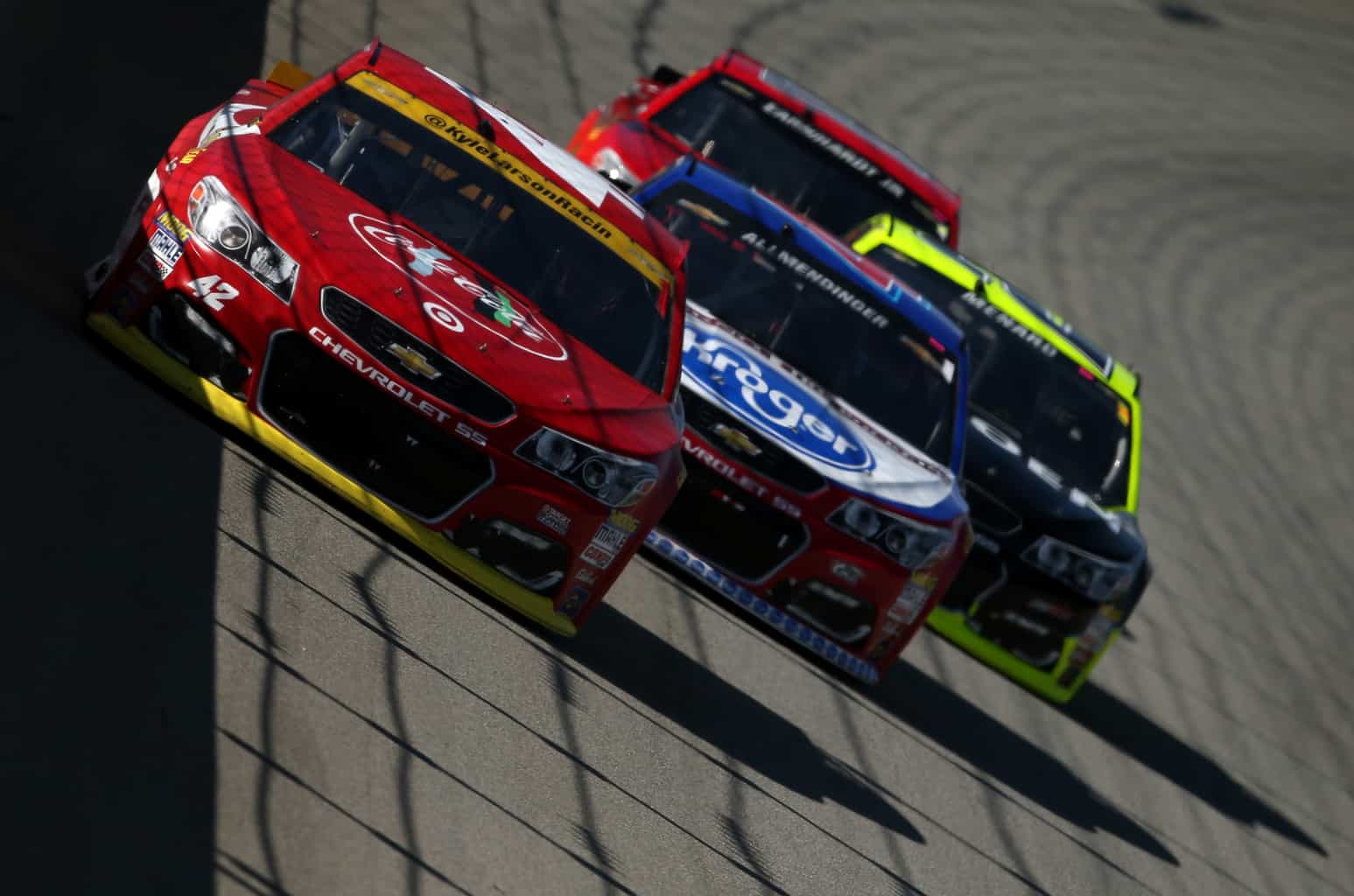 For much of the final 100 laps, it appeared that the story leaving Chicagoland Speedway would be Chase Elliott’s first win.

However, after a late-race caution and Martin Truex, Jr.’s victory, the two topics that comes to mind are tires and cautions.

Tire woes proved to be the difference in Sunday’s race, beginning with Truex’s early flat tire and culminating in his victory after a late caution for — you guessed it — a flat tire.

After leading 30 laps, Truex’s first 100 miles resulted in the first issue for any of the 16 competitors in this season’s Chase when an unexpected flat tire forced the Furniture Row Racing driver to pit road under green-flag conditions. Trapped a lap down, Truex began his steady ascent back through the field.

That ascent would continue on through the rest of the event. The New Jersey native methodically worked his way toward the front, entering the top 20 by lap 120, rising into the top 10 shortly before lap 170, and climbing into the top 5 after lap 210.

Truex climbed into second as the race hit 20 to go, and found himself within just one second of leader Chase Elliott as the laps wound down. Yet, despite his rise, Truex’s car betrayed him in the closing laps as he proved unable to close on the Hendrick Motorsports rookie. Fans watched nervously as Jeff Gordon’s successor drove to what looked like his first victory.

Then, with just five laps to go, the caution flag waved. Michael McDowell had blown a tire.

The rest is history. Truex’s team did its job and got its driver off pit road ahead of Elliott, and Truex parlayed the good stop into a race victory after passing the three cars that elected to stay out for track position.

“On one hand the bad luck was going to bite us and on the other we had a lot of time to battle back,” Truex said after the race. “We’re lucky it happened early and we were able to have an awesome racecar all day.”

However, while Truex’s team earned a net benefit in the end from cautions and tire issues, two of the Chase’s strongest competitors suffered.

Kevin Harvick was the talk of the garage in the opening stages of the event, rising from the back of the field to the top 10 in just 20 laps after his No. 4 team was penalized for unapproved adjustments.

Looking to avenge his disastrous 2015 showing in Chicagoland, Harvick had risen into seventh when his team brought him to pit road just behind Jimmie Johnson on Lap 49.

Then, as Harvick began to accelerate out of pit road, the caution flew.

The timing of the caution was impeccable for Johnson, elevating the six-time champion to the race lead after he beat race leader Truex to the start-finish line.

Harvick, on the other hand, was trapped a lap down.

This is how close it was for 4 car exiting pit road. 48 beats leader to s/f but 4 did not pic.twitter.com/lUI51PdIzX

From there on it wasn’t a caution, but a lack of one that would trap Harvick a lap down for the rest of the race. “El Toro,” as wife Delana Harvick has referred to him in recent weeks, was left seeing red after a 20th-place finish. The Californian now finds himself one point out of the Chase field with two races remaining in Round 1.

Joining Harvick outside of the Chase grid after Chicagoland is Kyle Larson.

Entering with three-straight finishes of third or better, Larson was a trendy dark horse pick to survive to the Championship 4 at Homestead-Miami Speedway. To the credit of those that picked him, Larson looked every bit deserving of the praise for 350 of Sunday’s 400 miles, running inside of the top 10 and contending for a top 5 through the closing stages.

Unfortunately for Larson, everything fell apart in the final 50 miles. The Chase newcomer was forced to pit road over the race’s final stint with a flat tire and was subsequently trapped a lap down. Larson would make the best of the bad situation, finishing first among lapped cars, but that only proved good for 18th when the checkered flag flew. The Chip Ganassi Racing driver now finds himself 15th in the Chase standings, on the outside looking in for a berth in the second round.

Truex finds himself locked into the second round of the Chase after claiming his third victory of the year, a mark that ties his career total entering 2016. For Larson and Harvick, however, there’s now work to do.

Teams that enter the Chase with speed and consistency are typically positioned to make a deep run. However, as Sunday’s Teenage Mutant Ninja Turtles 400 proved, sometime a little luck can make all the difference.