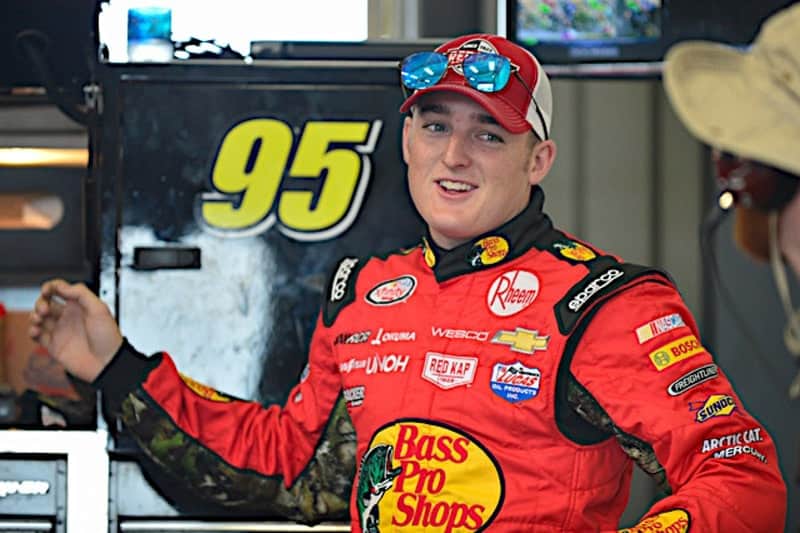 With Regan Smith at home in North Carolina, anticipating the birth of his second child, NASCAR XFINITY Series regular Ty Dillon has been tapped to sub. Dillon will slide behind the wheel of Tommy Baldwin Racing’s No. 7 Chevrolet in today’s Teenage Mutant Ninja Turtles 400 at Chicagoland Speedway.

The team announced the news on social media Sunday morning.

Dillon practiced the car throughout the weekend as Smith flew home to North Carolina. Meanwhile, Smith kept fans updated on his status periodically through social media, most recently confirming that the baby still hadn’t been born on Saturday morning.

No baby yet, still a waiting game and as anybody with kids knows this process is completely unpredictable.

Smith started all 26 races of the regular season before missing the Chase opener, tallying one top 5 and two top 10s to date in his first season with TBR. The one-car team has struggled this season, sitting outside the top 30 in owner points heading into this race.

Dillon, by comparison has eight Cup starts this year, running five races with Circle Sport-Leavine Family Racing and starting three times in a substitute role for the injured Tony Stewart earlier this season. While Dillon has no top 5s or top 10s in any of his 2016 starts, he did tally a sixth-place finish after replacing Stewart early on in the spring race at Talladega Superspeedway. He’ll start 33rd in Sunday’s race as qualifying for the event was rained out.

The move is a natural fit as TBR has an alliance with Dillon’s employer, Richard Childress Racing including engine and chassis support. Dillon is currently competing in the XFINITY Series, where he’s one of 12 drivers that will compete for that Chase championship beginning with next weekend’s standalone race at Kentucky Speedway. Grandfather Richard Childress indicated this weekend Dillon will run “almost” a full schedule in XFINITY next season as he tries to put together a full Sprint Cup Series program for 2017.

Oath taken by TV crew before each product:

I swear to talk the chase, for the whole chase, and nothing but the chase, so help me Brian.