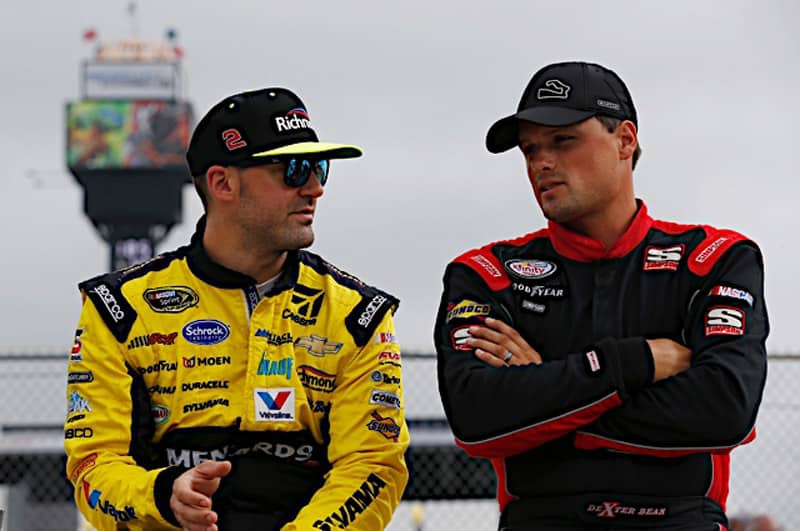 Sprint Cup: Banner Day Greets Hendrick Motorsports in Chicagoland: “Where have they been? Are they saving for the Chase? Will they even advance to the Round of 12?”

All these questions following Hendrick Motorsports into the 2016 Chase for the Sprint Cup may have been answered following the Teenage Mutant Ninja Turtles 400 at Chicagoland Speedway.

Jimmie Johnson, despite entering Chicago with some of his career-low numbers, was the man to beat after leading a season-high 118 laps. Showing a certain level of speed untouched through 26 races of 2016, Johnson was rightfully disappointed after speeding on pit road late in the race.

Though a 12th-place effort is the end result, it wont tell the story of the speed showed by the six-time champion once again.

If there was one who could out-pace the No. 48, it would’ve been Chase Elliott, the rookie Chaser who was on his way to his first Sprint Cup win before a caution flew with five laps to go.

Nailing the few restarts of the day, his past weakness soon turned to a strength, driving by Johnson to take the lead late.

Elliott’s third-place was complimented by his two non-Chase teammates in Kasey Kahne and Alex Bowman, who each raced in the top 10 throughout the day before finishing seventh and 10th, respectively.

If Sunday is an omen for things to come, the Chevrolet team could be on the cusp of a championship drive between Johnson and Elliott. – Zach Catanzareti

XFINITY Series: Chicagoland Top Five Could be Championship Four – The field for the first ever XFINITY Series Chase is finally set.  By winning his fourth race of the season, Erik Jones firmly established himself as the championship favorite.  Jones’ biggest competition, however, may come from the other NXS drivers who finished in the top five at Chicagoland.

Elliott Sadler, Daniel Suarez and Justin Allgaier finished third through fifth respectively.  During the regular season, Sadler and Suarez were the only other Chase-eligible drivers to win races.  Both of them also spent several weeks leading the season-long points standings.  Sadler in particular has shown remarkable consistency, scoring 23 top 10s through 26 races.
Allgaier, Sadler’s JR Motorsports teammate, has logged the second most top 10s with 21.  Although JRM has not had the speed to match Joe Gibbs Racing drivers Jones and Suarez for most of the season, Sadler and Allgaier have been the best at maximizing points in most races.
The inaugural XFINITY Series Chase is likely to be an unpredictable affair.  However, JGR has established itself as the team to beat, with JRM not far behind.  The four XFINITY Series regulars who claimed top fives at Chicagoland are all solid bets to reach the championship race at Homestead. – Bryan Gable

NHRA: Four Drivers Get Countdown Off to a Strong Start – The NHRA Carolina Nationals from zMAX Dragway outside Charlotte marked the first race of the six-race Countdown to the Championship and for the four professional category winners, it gets that championship quest off on the right foot.

In Top Fuel it was a battle of the tool wagons as Antron Brown in the Matco Tools dragster faced off against Doug Kalitta in the MAC Tools ride. Brown started his run to the championship last year with a win at the Carolina Nationals and he duplicated the feat this year, laying down a 3.763 second, 319.29 mph run to beat Kalitta’s 3.811 seconds at 320.28 mph.

“You know what we call Doug, don’t you?” Brown said. “He’s that quiet, sniper assassin. Every time we line up on that starting line, I look over and I see that white, red and yellow car I say man, here comes the sniper again. Doug will sneak up on you. He’s done it to me numerous times before in the final, beat us in the final, and we owed him a couple. It felt good to pay that favor back.”

Funny Car saw a battle of the giant teams when Tommy Johnson, Jr., representing Don Schumacher Racing, took on John Force. Johnson got off the starting line first but Force ran him down and passed him at the finish, winning with a pass of 3.946 seconds, 324.05 mph to Johnson’s 3.987 seconds, 315.71 mph.

Force took on all comers, beating Dave Richards, Tim Wilkerson, and Ron Capps to earn his way to the finals.

While it looked like there might have been some chinks in the armor over recent weeks, it was once again an all KB Racing final as Jason Line and Greg Anderson faced off against each other, a familiar sight for much of the 2016 season.

Give this round to Line, who scored his 45th Pro Stock win and became the first two-time winner in the class at the Carolina Nationals. With the two Summit Camaros so evenly matched, it came down to who could make the sharper run and that was Line whose 6.621 second, 209.39 mph run bettered Anderson’s 6.639 seconds, 209.20 mph.

Line also raced his way past Shane Tucker, Bo Butner, and Vincent Nobile before facing off against Anderson.

Pro Stock Motorcycle competitors are gunning for the always tough Harley-Davidson team and while they managed to get Eddie Krawiec out early, Andrew Hines carried the banner into the finals against Chip Ellis. Ellis wasn’t going down without a fight though and struck a blow, taking out Hines with a 6.879 second, 194.88 mph pass to Hines’ 6.908 seconds, 193.49 mph. The margin of victory was just .007 seconds, but it was enough for Ellis’s first win since 2008.

Sports Cars: Acura Announces 2017 GT Plans – Over the past 25-plus years, Acura has been in and out of major sports car racing here in the United States. The early 1990’s saw Acura support Comptech Racing, which dominated IMSA’s Camel Lights class with a Spice chassis with Acura power. Acura-branded prototypes raced in the American Le Mans Series with teams such as Andretti Autosport and de Ferran Motorsports. Acura has had a longtime relationship with Wisconsin-based RealTime Racing in what is now Pirelli World Challenge dating back to the late 1990s.

On Friday, Acura held joint press conferences at Sonoma Raceway (Pirelli World Challenge) and Circuit of the Americas (IMSA WeatherTech SportsCar Championship) to announce two factory-backed programs for the new Acura NSX GT3 for 2017. In IMSA, Michael Shank Racing will field two NSX GT3’s in the GT Daytona class starting in January’s Rolex 24 at Daytona. Drivers will be announced for the two entries at a later. The team’s Ligier JS P2 will be retired after Petit Le Mans.

For IMSA, this will mean that at least seven and probably eight manufacturers should be on the grid in the GT Daytona class at the beginning of next year. In addition to Acura, Lexus should finally debut their RC-F GT3 that was supposed to race this year, but was shelved due to lack of pace. They’ll be joined by existing manufacturers Porsche, Audi, Lamborghini, Ferrari, BMW and Aston Martin (possibly).

For Pirelli World Challenge, Acura will be sticking with RealTime Racing. The Wisconsin team will also field two NSX GT3’s. RealTime Racing has done much of the on-track testing for the NSX GT3, including having Peter Kox (who drove the TLX-GT this weekend in Sonoma due to Spencer Pumpelly having commitments in Austin) test the car during official Pirelli World Challenge practice sessions.

For RealTime, this will not be the first time that they’ve raced an NSX. In the early 2000’s, the team fielded an NSX in Speedvision/SPEED World Challenge’s GT class for team owner Peter Cunningham. – Phil Allaway