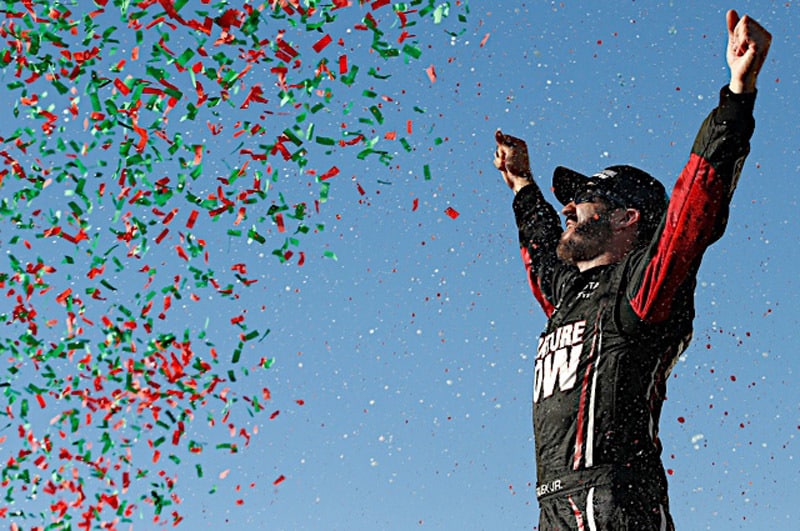 Staying out on a late caution won this race a year ago, and while it was not the winning strategy this time around, there’s something to be said for trying to make something happen late, which was exactly the tack taken by Ryan Blaney and Kasey Kahne. While neither driver was able to hold off the leaders, it got Blaney a fourth-place finish with a top 10 car, but not a top-5 one. For Kahne, it gave him a confidence booster that his team needs.  Taking chances is one part of racing that makes it exciting, and it’s always interesting to watch it play out, whether it leads to a win or not.

Sure, NASCAR said before the Chase started that they’d make the penalties for certain infractions have teeth…but Sunday’s race made it clear that it’s status quo as far as anything else.  Martin Truex, Jr. and Jimmie Johnson were hit with similar penalties for failing post-race laser inspection, but because Truex won and the infraction apparently wasn’t great enough to invoke the full penalty, NASCAR imposed just days ago, it will not affect his title hopes at all, because the win locks him into the next round regardless of any loss of points.

Johnson, meanwhile, will almost certainly have to win at Loudon or Dover to make up the deficit he’ll get.  Somehow, that doesn’t seem right. The penalty was deserved in both cases, but allowing Truex to keep the lock for the next round doesn’t sit right.  Any post-race infraction in the Chase should result in the win not counting toward the next round, at the very least.

Should Truex win the title based on this race, it will somehow seem tainted, and rightfully so. If the win didn’t count, I feel like he’d move forward with a cleaner slate, having to earn the spot with another win, and that would be OK, provided he passes inspection then.  The way it is seems somehow unfair to every Chase driver whose car was legal this week and who have to earn their way forward while Truex gets a free pass into the next group.

Kyle Busch started at the front thanks to a rainy Friday in Chicago, and he led the first 21 laps, but he wasn’t able to mount a charge later on in the race after a pit road speeding penalty cost him track position, and he came home eighth—not exactly the kind of on-fire finish Busch was reeling off earlier this summer, and while top 10s will get him to the next round in the Chase, they won’t be enough to catch a torrid Martin Truex, Jr.

Denny Hamlin, like his teammate, had a fast car and a solid race.  He led a couple of laps and finished sixth after his team admitted that they’ve been in test mode since Daytona.  Hamlin should be a favorite to win the title, but somehow it’s hard to label him as such. He’s seemed overlooked among his teammates at times, and there’s a nagging feeling that he hasn’t quite shown he can get it done.

NASCAR added timing lines on pit road after complaints that teams were able to gain an advantage by speeding in the section where their pit boxes were if the box was positioned right.  The additional lines have proven difficult, and this week, several teams made costly mistakes getting on and off pit road.  Included on the penalty list for speeding were Chase drivers Matt Kenseth, Kyle Busch and Jimmie Johnson, and while it didn’t put any of them in danger of missing the cut for the next round (though any postrace penalty for Johnson will), it does mean that they can’t afford another mistake at Loudon or Dover, and that’s not the best mindset to enter a race with.

Truex got a little lucky at the end of the race for sure.  It would have been close as to whether he could have both caught and passed Chase Elliott without the caution coming out for Michael McDowell’s tire.  But he could have very easily not been in any position to win at all, and his race Sunday makes him the favorite to win the title this year, not because of his win, but because of the way he got it.  A tire rub and the unscheduled pit stop to change the Goodyears might have left Truex frustrated and a lap down all day.

Instead, smart pit strategy, pitting with the leaders instead of rolling the dice for a caution, gave Truex the free pass and from there it was game on.  Overcoming adversity and making the best decisions on pit road were a large part of why Jimmie Johnson won five straight titles, and it’s why Truex and his team won Sunday.  In stark contrast to the No. 4 team’s inability to get past mistakes, the No 78 bunch takes them as much in stride as they can, and it’s paying off in the biggest way possible now.

How… big of a threat is Hendrick Motorsports in the Chase?

A month ago, the answer to this question might have been a resounding “none.”  But Sunday, Jimmie Johnson dominated most of the day, leading the most laps, and Chase Elliott came within a handful of laps of winning the race and setting an entirely different tone for the Chase.  Johnson in particular looked stronger this weekend than he has in months, and if that’s been by design and the team has been testing for the Chase, he could be trouble…if he can overcome a likely points penalty after Chicago.  Elliott is dangerous as well, in particular because nobody expects him to be a threat as a rookie.  It’s a little too soon to tell for sure if the Hendrick juggernaut is rolling just yet, but even as the Toyotas continue to reel off the wins, they might want to look over their shoulders.