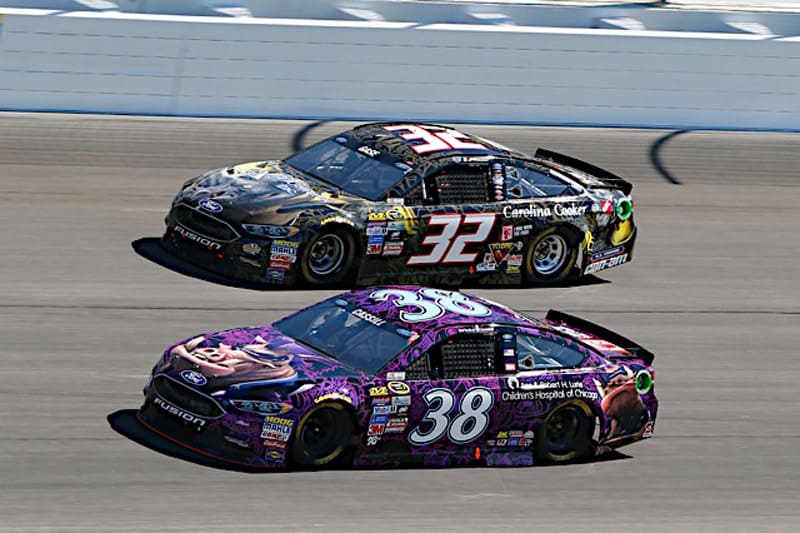 Think Small. That’s the motto for this column as I take a larger look at the teams still trying to make a name for themselves in the Cup Series despite fewer resources and a far more difficult mountain to climb.

Writer’s Note: What follows is another fresh look for this column, one I expect to stick with.  There are some really great stories and great people on the back half of the garage, and this is the place to find them, mixed with a little commentary, a little race analysis, and a little fun.

Top of the Class: Chicago

Ryan Blaney and his Wood Brothers team played strategy perfectly on Sunday.  Blaney had a top-10 car, but a gamble on the final caution gave him a top-5 finish.  While Blaney missed the Chase this season, strategy calls like the one his team made, when they pay off, are the kind of thing that will only see this team get better. AJ Allmendinger also had a strong race at Chicago, finishing 17th.  Top 20s are a big step for this team, and they’ve been able to get them fairly consistently this year. Finally, Clint Bowyer has been frustrated with his HScott Motorsports team at times this year as he’s used to top equipment, but Bowyer has done a credible job of helping the team improve, and he should be proud of what he has accomplished, all things considered.

Passing Grades
Finishing in the 20s this week were Ty Dillon (who filled in for Regan Smith in the Tommy Baldwin Racing No. 7), Chris Buescher, and Landon Cassill.  While Buescher and Cassill might have been capable of finishing five spots higher, they had solid, drama-free runs, just nothing to write home about. Matt DiBenedetto had an OK if uninspired day in 30th.  For him, just staying out of trouble and having a smooth race was important, and he did do that. Michael Annett, in 33rd, finished about where expected.

Needs Improvement
Bottom of the barrel this week was Joey Gase driving for Go FAS Racing. To be fair, Gase lacks experience, and the team has struggled all season regardless, but they need to stick with one driver.  Jeffrey Earnhardt has done a decent job for them, and he’s a thorough communicator, which the team needs right now. It might be the best move for all involved to commit to Earnhardt. Michael McDowell had what has become an uncharacteristically poor finish this week, thanks to a blown tire that really doesn’t reflect his performance at Chicago.  It happens, and it shows how far this team has come that what was a weekly occurrence last year will leave them grumbling about bad luck in 2016. David Ragan also had some bad luck that led to a 35th-place run that’s a little atypical for him. The flip side of bad luck is that you make your own luck and Casey Mears made his bed Sunday with not one, but two speeding penalties which cost him multiple laps. He had a better car than his 34th-plcae finish, but wasn’t able to capitalize.  The No. 13 team has lost a step this year, and mistakes won’t help them get it back.

Finally, Premium Motorsports, with drivers Reed Sorenson (39th) and Cole Whitt (36th), and The Motorsports Group with Josh Wise (38th) continued their struggles. The difference between their finishes and those of McDowell and Mears is that it’s hard to say they should be finishing higher than that.  They need a lot of work going forward if they stay in the series; the addition of a couple teams with more money in the next few years will leave them without starting spots most weeks.

Newsworthy
The biggest story of the week in this group was Ty Dillon helping out Regan Smith and driving the No. 7 while Smith was at home with his wife, Megan, as she delivered the couple’s second, a girl named Eliza Grace, who joins big brother Rhett.  Smith Tweeted about Eliza’s arrival on Sunday:

The two most beautiful girls I've ever laid my eyes on.
We welcomed Eliza Grace Smith to the world this afternoon. pic.twitter.com/l9xqpxNeJH

Congratulations to the Smith family!

Say Anything
“With it being the Teenage Mutant Ninja Turtles 400, we have Bebop on our Ford Fusion. He’s one of the bad guys — he’s a mutant warthog. And, sticking with the kids theme, we also have Lurie Children’s Hospital of Chicago on the car as well. Front Row Motorsports has worked with them in the past through Love’s Travel Stops, and they do amazing work with kids. So, we’re happy to have them on this cool-looking scheme at their home track.”-Landon Cassill on his Chicago paint scheme

Rough day for us. Sorry all the @chaseelliott fans out there. Nothing I could have done tire blew just before I got to turn 3 headed to pits

hey… heck of a call on staying out. i was gonna say it was stupid if it didn't work but thats how i roll. great job by crew & Blaney P4

Bringing the 80's back. @SunocoRacing. Believe it or not the damn thing jams! pic.twitter.com/jkPpfzPclk

This column is great. The motorsport journalism in good ol’ Germany doesn’t cover the little guys in any way. And by the way – I love them …

Interesting article. So the Woods Brothers are considered a small team to you but not Furniture Row? Gee all this one car team located in Denver Colorado did was win the race. What? Oh you are not counting Furniture Row as they have an alliance with Joe Gibbs? I see. But we’ll count the Woods Brothers even though they also have an alliance with a strong team as well. Yes that makes sense.

Other than that its great for the small teams to be recognized. Too bad NASCAR doesn’t care about them

Wood Brothers Racing does not have a charter. This makes it small no matter what the alliance may be.

Good point.
What is the criteria for being considered a small team? Single car team? No charter? No alliance with other teams? Bottom 15 in points?

So Amy, what is the common thread that all these teams/drivers have in common to be covered in this Underdog/Little Guys column?

If I remember correctly, Furniture Row (#78) used to be included in this group but when they started being the top team in this group every week and they started competing for wins on a weekly basis they were not considered a “small” team anymore.

Here is my determination of small teams, which appears in an earlier edition of this column:

“What makes a small team? I’m frequently asked how to categorize NASCAR’s teams. I look at a couple of things when I make the list each spring: budget and performance. Small teams simply don’t have the budgets of the larger ones, even middle-tier organizations. They may have alliances with bigger teams, but that doesn’t mean everything gets handed to them; they still buy their own equipment, though they may buy it from bigger teams rather than building every piece from scratch. It’s not free, contrary to what some people may believe.

While Wood Brothers Racing gets equipment from Team Penske, they still have to work within a much smaller budget. That’s the same for those who work with Richard Childress Racing; information is shared, parts and pieces are bought, but they’re ultimately in control of their own destiny. They have a lot less money to control it with and little-to-no factory support from the car manufacturers.

From a performance aspect, for the most part, these are teams for whom a top 20 is a good week and a top 15 is a great one. Consistent finishes inside the top 20 are generally the mark of a mid-tier team, such as Chip Ganassi Racing and Richard Petty Motorsports. While the Nos. 21 and 47 are making their case to be elevated to that group, just as Furniture Row Racing elevated itself from small team status last year, you won’t see teams added or subtracted from the list midseason. It takes time to grow in the sport and to sustain that growth.”

Here is the link to that column:https://frontstretch.com/2016/07/04/the-underdog-house-tracking-nascars-small-teams-from-daytona-to-kentucky/

Bill B
Reply to  Amy Henderson

OK. Thanks for the explanation.