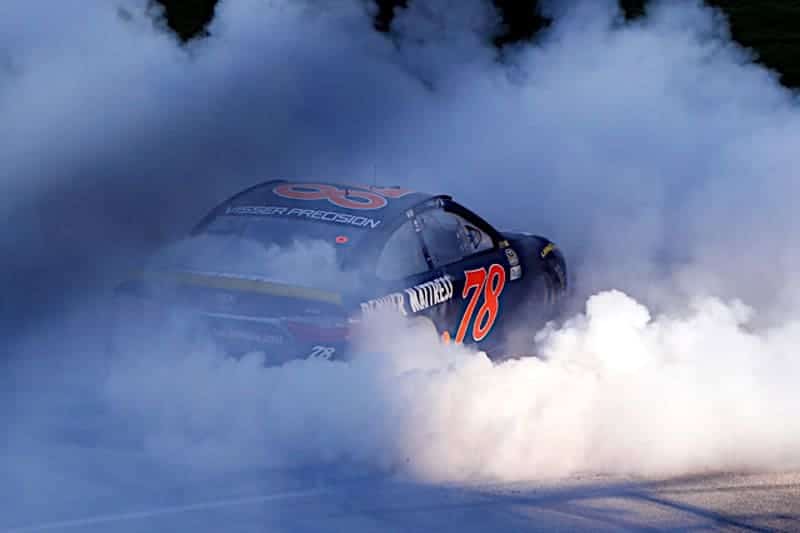 Sunday brought us our first Chase race and for some drivers, the first race that had real implications for them since a win earlier this season. Due to some upcoming penalties that will likely be announced Wednesday, we don’t even know what all of those implications will be.

HOT
It remains to be seen if the win by Martin Truex, Jr. on Sunday is somewhat of a pyrrhic victory or not as he was one of two cars (the other being Jimmie Johnson) to fail post-race inspection. At least on the track on Sunday, Truex got a little break as he was running second when a late spin due to a blown tire by Michael McDowell caused a late caution forcing a two-lap shootout. That put Truex in position to win his third race of the season and establish himself as one of the favorites to become one of the four drivers to go for the title at Homestead in November. But with the post-race inspection issue, the severity of the penalty leaves a big question mark hanging over this victory.

NOT
Chase Elliott seems to have done everything he can to win a race this season, only to come up short. Now, the only reason this is in the NOT category is because Elliott had this thing won until McDowell’s spin. Give McDowell credit for apologizing to Elliott’s fans saying there was nothing he could do about a blown tire. Elliott did end up finishing third and sits solidly in sixth position in the Chase standings. But he has to be somewhat frustrated that he’s still chasing that first Sprint Cup victory.

HOT
One of the hot topics, started in part by ESPN analyst and former NASCAR driver Ricky Craven, is post-race inspection. Craven has stated on several occasions that there should be no post-race inspection. But here’s the problem with that: Today’s crew chiefs and engineers are smart to know how to get a car through inspection for pre-race, then have it set up for the chassis to change during the race, even without contact with other cars or the wall. It was at the July Pocono race when at the end of the race the field was under yellow, that Tony Stewart said on his in-car radio that several drivers were swerving to reset their chassis. “It’s the usual suspects,” Stewart said on the radio. That’s enough to tell me there still needs to be a post-race inspection. There’s just too much pressure to win these races and if some teams aren’t made to follow the rules, they won’t.

NOT
It appeared as though Jimmie Johnson had a breakthrough at Chicagoland, leading a race-high 118 laps before a speeding on pit road penalty and the final shuffle left him with a 12th-place finish. But since Johnson’s No. 48 didn’t pass post-race inspection, and crew chief Chad Knaus has a long history of getting caught breaking NASCAR’s rules, it would be surprise if there is not a significant point penalty for the team. Right now, Johnson sits in 8th place in the points at 2,037, 10 ahead of 13th-place Austin Dillon. But any kind of points penalty at all is going force Johnson having to race his way back into the top 12. And he just might have quite a bit of points ground to make up.

HOT
It’s true that he is not in the Chase, but give Ryan Blaney and crew chief Jeremy Bullins credit for trying to steal a win Sunday. The late caution by McDowell saw almost all the cars on the lead lap come in for tires. But Blaney, Kasey Kahne and Carl Edwards each stayed out on old tires. While Kahne faded to eighth and Edwards to 15th, Blaney hung on for a fourth-place finish. While the stay out call was a no brainer for Bullins, the fact that Blaney managed that high of a finish on the old tires is a credit to his driving skill.

NOT
The race at Chicagoland was kind of a déjà vu day for Kevin Harvick. After running into trouble last year at Chicagoland, he needed a win in the first elimination race at Dover, which he did win. Sunday, Harvick’s car was plenty fast enough, but he got caught on pit road when a yellow flag came out and the end result was him going a lap down. While his lap times were on par with Elliott’s and Truex’s much of the day, Harvick couldn’t get himself unlapped. The end result was a 20th place finish leaving him 14th in the Chase standings, but still just one point behind teammate Tony Stewart for the 12th and final spot. It will be interesting to see what happens at Dover if both Harvick and Johnson are left with a must-situation in order to advance.

Predictions
When looking at the drivers with the best recent finishes at New Hampshire, race No. 2 in the Chase, the two drivers that stick out are Matt Kenseth and Joey Logano. Given the incidents those two had in last year’s Chase, that’s pretty interesting. So with that in mind, I’m going with Logano to win this Sunday as he has a win and four top 10 finishes in the last five races there. The deep sleeper underdog who you might or might not think about pick is Greg Biffle, who has two top 10s and an average finish of 13.4 in the last five Chicagoland races.

Hot cheats & you brag? Ahhhh Nascar! Born & breed for the discerning degenerate! Where cheaters advance & points, there-in the championship, is meaningless!
Facts check – 3 Fords in the top 5 Sunday & no cheating! Aka: moral victory, as it is a victory anytime an SHR goon doesn’t intentionally pile drive you!

I guess Truex and Johnson didn’t swerve enough to reset their rear ends. Maybe they should talk to Irvan.