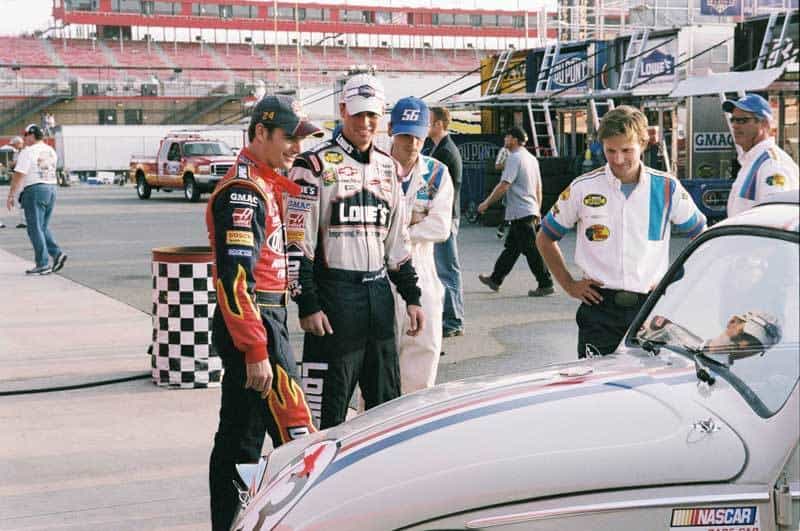 “Grand Prix–the 1966 F1 movie. (You probably expected Days of Thunder). I found and watched this recently on a classic movie channel. Seing what F1 was like — the cars, the tracks, etc. — 50 years ago was just beyond cool. It was so, so different in many ways and yet, so, so similar in some others. The racing clips are good because many of them are the real deal from 1966 F1 races. It stars James Garner, who of course did his own driving–as did some of the other stars to at least some extent. And there’s Garner’s Shelby. Here’s the trailer, and also a clip that is not credited as such–although the poster does note it and is right–this Monza footage is from the movie.” -Toni Montgomery, NHRA Editor

“According to film legend, when Grand Prix was screened for audiences in its Cinerama format, auditoriums needed to have vomit bags nearby because viewers would get motion sick during the close up racing sequences. I highly recommend the Blu-ray edition with all its background material about the making of the movie.” –Mark Howell, Senior Writer

“My guilty pleasure racing movie is Driven. Terrible, I know. But there you go. I think I just like it because Stallone is a racecar driver which seems pretty ridiculous.” –Danny Peters, Senior Writer

“I have Driven. I share that guilty pleasure. Stallone as a race car driver is ridiculous. As is the cars flying through the air, Michael Andretti ends up in a pond bit–but it’s all fun. It’s the Days of Thunder of the IndyCar set.” –Toni Montgomery

“I love the original Herbie—The Love Bug.  I have it on DVD. It’s a racecar. With feelings. That pees oil on people it doesn’t like. It’s a freaking Beetle.  And it’s ADORABLE.” –Amy Henderson, Senior Editor

“I adored Herbie when I was a little kid. However, if you are using it, I’d stick to the original, the one WITHOUT Lindsey Lohan.”-Toni Montgomery

“But the recent Herbie version with Lohan also features a ton of NASCAR stuff (including totally awkward performances by both Jeff Gordon and Jimmie Johnson)!” –Mark Howell

“I always enjoyed the original Herbie a lot with Dean Jones. In the same manner, what about Cars, even though it was animated. They did have The King’ and Mrs. The King’ real voices in it as well as some other NASCAR icons.” –Jeff Wolfe, Senior Writer

“I actually saw Herbie while fully loaded a few times. It was a lot funnier that way. But if you go back to the original and have a working knowledge of classic cars it’s pretty amazing some of the cars they were able to borrow or rent for a Disney film. The 1956 Ferrari 250 GT LWB (driven by the bad guys) is now worth kissing close to 10 million dollars.” –Matt McLaughlin, Senior Writer

“I’ll step outside the lines here and go with a racing movie of a less organized sort: Two-Lane Blacktop. Cult classic hot rod road movie released at the height of the disaffected anti-hero craze on the early 1970s. James Taylor with a flowing mane of hair and Dennis Wilson is what might be the greasiest pair of pants every witnessed were like Kurt Cobain and Jeff Spicoli if they campaigned a primered ‘55 Chevy in street and match racing across the country. In the midst of this they keep running into Warren Oates in his 1970 455 Ram Air Mk IV Pontiac GTO Judge. He picks up hitchhikers galore, his story changing with each passenger. It won’t win any awards for editing or cinematography, but in the beginning it features some legitimate street racing footage with some legends of the day, is an amazing time machine and remains a staple of any gear heads favorite movie list.” –Vito Pugliese, Senior Writer

5. Barney Oldfield’s Race for a Life

“My top choice is yet another 1913 silent short. Mack Sennett capitalized on the national fame of race car driver Barney Oldfield in 1913 by putting him in a melodramatic film called Barney Oldfield’s Race for a Life. All the usual Keystone Studios regulars are included, and even Sennett himself “stars” as the love interest/”bashful suitor” of Mabel Normand. We get to see the famous “Keystone Kops” being clumsy and inept, we get to see Ford Sterling as a mustache-twirling villain, and we get to see the customary “damsel-in-distress” archetype. Best of all: we get to see Barney Oldfield drive a Benz at high speed. Not sure if it was meant to be, but it’s interesting how Oldfield’s automobile outruns a steam locomotive to save the day. Back in 1913, the automobile was poised to replace the railroad as America’s primary form of personal transportation. Maybe this film supplied a bit of foreshadowing? At one point, near the end of the “race”, Oldfield really mashes the gas. It’s fun to watch!” –Mark Howell

When you watch Grand Prix, check out the difference in the Monaco track back then. They used Formula 2 cars in the movie.

I did not contribute to this week’s Frontstretch five, but after seeing my colleague’s choices, I feel a responsibility to make up for Number 2. Driven? Really? lolol… It’s an ok movie, but It’s not on the list of Hollywood flops for no reason. So here are my unofficial Honorable Mentions.

2.) “Grand Prix.” James Garner was the star of this one, and he actually drove an F2 car around Monza at full tilt for filming.

and then there’s No. 3… This one is rather Obvious, but it’s not Days of Thunder or Talladega Nights. It’s “Six Pack.” Kenny Rogers plays Brewster Baker. A racer on the comeback trail after his former Crew Chief Turk Logan rigs his brakes to fail at Atlanta. He meets up with a group of orphaned kids who are better mechanics than Dale Inman and Smokey Yunick put together. After trying to steal Brewster’s car parts, The kids become his crew, and He does so well he ends up making his return to the NASCAR Winston Cup Series. Great Movie. Trust me.

The only 2 great racing movies ever made were #1 LeMans which was actually about racing and didn’t involve a love story, and #2 Grand Prix which was 3/4 racing and 1/4 love story.

The best racing comedy was Burt Reynolds in Stroker Ace, who could forget him driving the plucked chicken?

There was also a movie made about Jr. Johnson which I’ve heard was good but I’ve never seen it so I can’t rate it.

The one about Richard Petty I’ve seen and that’s why it’s not on the list.

No love for “Rush”, huh? I don’t know if it’s my favorite race based movie but it was very well done and actually based on a real racing.

Le Mans for sure. No words for the first 20 minutes…. just sight and glorious sound.