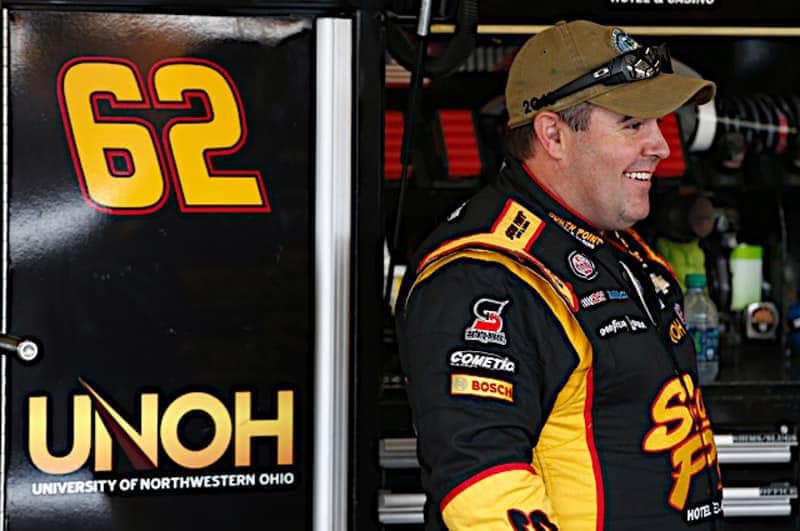 Despite a difficult ending for some Chasers, Chicagoland Speedway still saw no playoff contender finish lower than 28th. Did take anything from that race which makes you concerned about any of the main title contenders?

Amy Henderson, Senior Editor: No.  The only thing I saw that was a bit unexpected was Jimmie Johnson’s dominance for much of the race, because we haven’t seen that from him in months. He could be a factor in this, and that’s not something I figured would happen.  But other than that, it’s looking like status quo: Joe Gibbs Racing (and affiliate Furniture Row Racing) and everybody else.

Aaron Bearden, Assistant Editor: Chris Buescher‘s out, but that’s no surprise and he’s not a main contender. Other than that, all Sunday did was put a few favorites on watch in Kevin Harvick and Kyle Larson. Both drivers will go into New Hampshire Motor Speedway either on or just behind the bubble, which means decent performance over the next two weeks will advance them on. However, if either have issues… well, let’s just say Dover International Speedway will be fun.

Mark Howell, Senior Writer: The Chase haves will continue to outrun the have-nots. Even when the top dogs have poor showings, their teams, at the very least, have the depth needed to get them off the porch. It was a surprise to see Furniture Row fail post-race inspection, but until NASCAR puts more teeth behind those penalties, business will trend as usual. A serious crackdown on P4 violations seems irrelevant since we have yet to ever see one. I fear for the futures of Buescher, Austin Dillon and Jamie McMurray as we get closer to Dover.

Post-race laser inspection failures put a black cloud on winner Martin Truex, Jr. and Jimmie Johnson. NASCAR made a big deal about failing inspection and how it would take Chase wins away. Then, Johnson and Truex failed but drew no penalties? Should there be penalties then for that type of failure unless it’s a so-called big deal?

Bearden: NASCAR’s transparency in recent years has been a pleasant sight, but in this case it hurts the sanctioning body a little bit. I say we make it like pit road speeding penalties. Set the desired threshold (50 mph), allow teams a small bit of wiggle room where they won’t be penalized (50-54.99 mph) and then hammer teams if they go over it. Take the gray area out and make it obvious what’ll happen leaving the track.

Howell: Failing post-race laser inspection is a purely objective deal; your car is either within tolerances or it’s not. Thus far, NASCAR is treating these failed inspections as an almost-pregnant situation. Either you’re good or you’re breaking the rules and deserve to be punished for doing so. If these post-race tests are so critical, why doesn’t NASCAR establish a standard penalty? It’s closed the door on major violations with the P4 criteria. Now do the same with a failed LIS.

Henderson: Yes, absolutely.  A car is either legal or it’s not, and if it’s not, there should be a hefty penalty, including stripping finishing position and points.  If NASCAR wants to have levels of wrongdoing, then they should come into play after the above in the form of fines, suspensions, etc.  But an illegal car should never be allowed to slide unless the failure is obviously due to a part failure or an accident. I do think in this particular case, NASCAR did make a call in the name of fairness, though I’d have rather seen it go the other way and Truex’s win not count for advancement so a points penalty would then be equal for him and Johnson.

Ricky Craven said on Twitter this week that he’d like to see NASCAR abandon post-race inspections altogether.  Is this something the sanctioning body should consider to avoid situations like we saw at Chicagoland?

Howell: Given Craven’s comments, the next line of reasoning might be, “Then why have a rule book at all?” The problem with NASCAR eliminating post-race inspections is that it’ll set a dangerous precedent. I’m old enough to remember the days of teams starting races with bars of soap between coil springs and filling frame rails with BBs. Dropping post-race inspection will simply invite an entirely new set of compliance problems.

Henderson: No, no and no. If anything, I’d like to see NASCAR be more thorough and run more cars through tech.  If nobody was inspected, teams would be doing all kinds of things to the cars during the race and cheating would be rampant. That’s not something that’s good for the sport in any way. If credibility is an issue now, abandoning post-race inspection would only make things worse.

Bearden: No. There has to be something to hold these teams accountable after the race if they want to keep parity throughout the field. I love Craven and often agree with what he has to say, but this time I respectfully disagree.

The XFINITY Series runs its final standalone race of the 2016 season this weekend at Kentucky Speedway. Who do you think has the best shot to capture a win with most (hey, Ryan Blaney) of the Cup regulars absent?

Henderson: How about a couple of drivers who are overdue for another trophy? Daniel Suarez is an outstanding talent and I’m surprised he doesn’t have more wins in the series—his teammate Erik Jones might get more attention, but I think Suarez has just as much potential.  Also, keep an eye on Brendan Gaughan, who is always a threat at Kentucky and who could use a win to bolster him in the standings.

Bearden: I’ve said all year that Erik Jones is the best in the bunch if he doesn’t best himself. There’s no reason to think that Saturday will be any different.

Howell: Look for Jones to shine. The young Michigander is poised to win the whole deal. Take Cup drivers out of the lineup, and Jones should have Victory Lane to himself. His toughest competition may be his own desire to win. He’ll be challenged all race long, but Jones will most likely emerge on top of the heap.

There are no other tracks where Xfinity can run a standalone race than a 1.5 mile Cup track?

“Failing laser inspection is a purely objective deal.” But is it? Unnoticed in all the hoopla was the fact that one car (#18) failed the first time through and passed on the second time through. I saw NO discussion from the media “experts” as to how that could happen. Was the team allowed to alter the car between the first and second attempts – or is the laser inspection process subject to variation in results based on an inherent design flaw or operator error? If you are going to determine a champion by using a machine to make measurements, how do you ensure that the machine itself is accurate and consistent in making those measurements/

Perhaps the whole laser inspection process needs to be examined for “being out of tolerance” itself.

Used to be that one could watch a Busch race and truck race without being deluged with chase prattle. Brian in his infinite wisdom changed that with two more “brilliant” ideas. Oh for the good old days.