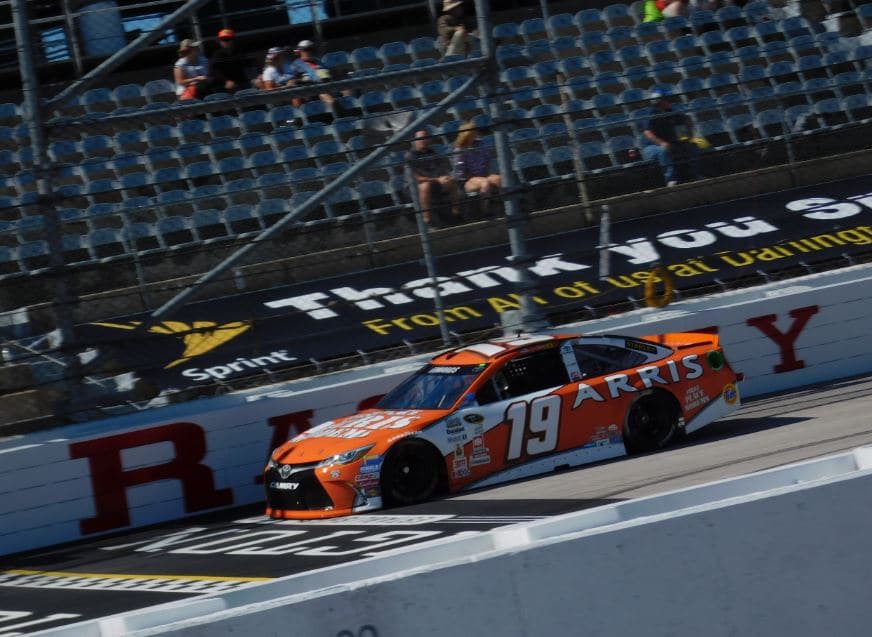 Carl Edwards added another pole to his resume on Friday when he turned the fastest lap in the final round of qualifying in the NASCAR Sprint Cup Series at New Hampshire Motor Speedway, at 135.453 mph. The No. 19 has started atop the scoring pylon six times in 2016, the most in a single season of Edwards’ Cup Series career.

The first-place effort marks Edwards’ 22nd top-10 start in 28 races this season. Winning the pole, he was awarded $25,000 to the charity of his choosing, which he split with Speedway Children Charities and the NASCAR Foundation.

“It’s a really fun track to drive when your car’s that good,” Edwards said. “It’s just what we needed. We didn’t run well at Chicagoland, I was very frustrated. To come here and start on the pole and get a good pit stall, hopefully we can have a good race.”

Martin Truex, Jr. will line up second on Sunday with a speed of 135.212 mph, .050 seconds off the top speed. This marks the fifth time of 2016 the No. 78 machine has started on the front row, three of which were pole-winning efforts.

Three-time New Hampshire winner Ryan Newman will roll off Sunday from the third position. The No. 31 car kept improving on the scoring chart, running his fastest lap in the third and final round (134.896 mph).

The Chip Ganassi Racing duo of Kyle Larson and Jamie McMurray will start sixth and seventh on Sunday. The winner of the last two races at New Hampshire Matt Kenseth will begin the race from the eighth position, while Kasey Kahne and Chase Elliott make up the rest of the top 10.

“It was a good day,” Larson said of his Friday. “We found some speed in practice and then able to have a good lap in qualifying. It’s going to be different when we get to race trim, all we’ve done is qualifying today. I can always go fast with lots of grip on the tires, but once the tires wear out a little bit that’s where I tend to slow down.”

Brad Keselowski and Kyle Busch were the final two drivers to make the final round of qualifying.

Dillon turned his first laps in his backup car during the first round of qualifying. With 14 minutes to go in the first practice of the weekend, the No. 3 car charged turn 1, locking up his brakes crashing into the wall. It’s the first time in his Cup Series career that he has gone to a backup car during a race weekend.

“It’s been a challenge for sure,” Dillon said of his Friday at New Hampshire. “We just have to work through it as a team.”

Many teams had to go through the inspection line multiple times prior to qualifying. When the green flag flew over the initial start of qualifying, 16 of the 40-car field had yet to take their position on pit road, including Chase drivers Harvick and Stewart. Regan Smith’s No. 7 was the last one to make it through the line, with five minutes to spare.

Clint Bowyer spun in the opening round of qualifying, causing the red flag for four minutes. The red flag gave the teams that had yet to make it through inspection some extra time to get through the process.

There are two practices on Saturday, the first beginning at 9 a.m. ET. Final practice is slated to roll off at 11:30 a.m. ET.