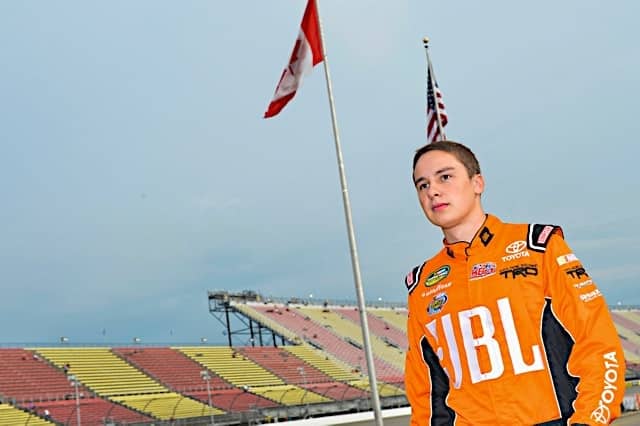 As the NASCAR Camping World Truck Series approaches the inaugural race to its inaugural Chase, drivers need to be at their best in the final seven races. Series rookie Christopher Bell is in the midst of an up and down season for Kyle Busch Motorsports, one on which he would to improve.

That said, Bell, 21, is in the midst of his best stretch of races since coming to NASCAR last season. The No. 4 truck has nine top-10 finishes in the last 10 races, dating back to Iowa Speedway in June. But though he was victorious at Gateway Motorsports Park, punching his ticket to the Chase, the first-year full-time driver is not where he wants to be.

“Not good,” Bell tells Frontstretch. “We haven’t been where we’ve wanted to be. We’ve had moments where we should have won and I made mistakes. I just need to start putting races together and be better because I’ve had a couple of really fast race trucks and I’ve made mistakes and given them away.”

During the 16-race regular season, Bell paced the field for 186 laps, including a career-high 101 at Bristol Motor Speedway in August. After spinning late in the race, the No. 4 finished the race in seventh position.

There have been other instances in which Bell looked as though he was going to win. At Atlanta Motor Speedway early in the season, he was out front when he cut a tire, crashing with only a handful of laps to go. There have been other races in which he feels the team has not executed to its potential, something that needs to change during the seven-race Chase.

Regardless, does he believe he’s a favorite for the championship?

Bell ran a partial schedule for KBM last season, winning the Mudsummer Classic at Eldora Speedway. During his tenure at KBM, he has grown close to 2015 Sprint Cup Series champion and team owner Kyle Busch. He said he feels that digging into his boss’ mind could help him when it comes to crunch time in the final section of the season.

“He’s been a huge influence, especially recently since I’ve been connected with him and driving for him,” Bell says. “It’s cool to see how involved he is with all of his teams. He’s at the majority of the competition meetings whenever he can be. He’s always talking to the drivers and talking to the crew chiefs on how to improve and make things better.”

In 2016, Bell has an average finish of 10.9 with 11 top-10 finishes. Since the third race of the season at Martinsville Speedway, the No. 4 truck has two just finishes outside the top 10.

Martinsville is a track that the team struggled at in the spring, qualifying 14th and finishing 19th. The shortest track on the circuit did not allow Bell to use the cushion, something he is familiar with in his dirt car days.

“Martinsville has been my weak link so far,” Bell says. “Mile-and-a-halves, we’ve had really fast trucks and I felt like we’ve been really good at. I feel like that’s the important part of having a successful team is to be able to be good at the 1.5-mile race tracks because they are the majority.”

Talladega Superspeedway is also among the seven Chase races. Bell finished the season-opening race at Daytona International Speedway barrel-rolling down the frontstretch while competing for the win. As a result? Not a huge fan of that kind of racing.

“I hate it,” Bell says “It’s dumb. I would call it a chess game, but you’re not in control that much. You’re along for the ride and luck is such a deciding factor of it. But it is in the Chase and its something I have to get better at because restrictor plate racing is a part of the game.”

While competing part-time in the Truck Series in 2015, Bell raced at four of the seven Chase tracks. In those races he had an eighth-place finish at Texas, his only top-10 result at the four tracks. In the other three events, he had an average finish of 17.3.