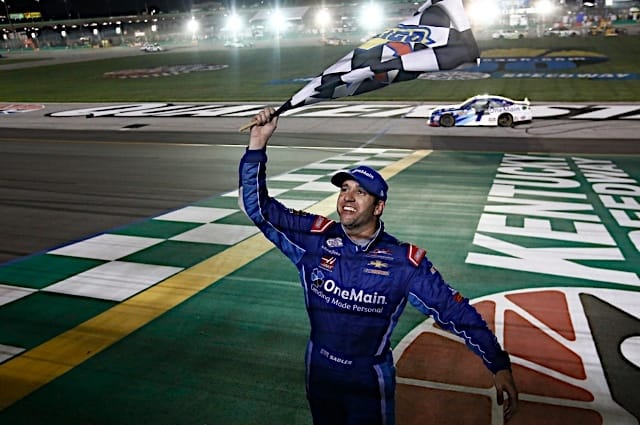 Teams dove low, swung high and crashed often in the NASCAR XFINITY Series Chase opener, and when the speedy dry finally settled at the end of a long night in Kentucky Speedway, it was Elliott Sadler that reigned supreme.

Sadler kept his No. 1 Chevrolet clean during an attrition-filled 200 laps and surged ahead of leader Ryan Blaney on the race’s final restart to take the VisitMyrtleBeach.com 300, his 13th-career XFINITY Series win, and his third victory of 2016.

Courtesy of the victory, Sadler also punched his name into the Round of 8 in the series’ first playoff.

After pushing Sadler out front on the final restart, Daniel Suarez made his way around Blaney in the final lap to take second, his best-career finish at the 1.5-mile Kentucky oval. Blaney followed in third, with part-timers Sam Hornish, Jr., and Matt Tifft rounding out the top 5.

While the battle for the lead in the closing laps was intriguing, the true story of the NXS Chase opener came in the 196 laps before it.

With the entire Chase grid entering a Chase format none have seen before in any level of motorsport, there was a certain level of uncertainty entering the final standalone event of the season. However, from the moment the green flag flew, the tone that was set was one of intensity.

It wasn’t uncommon to see two, three and even four-wide racing on Saturday, despite the recently repaved Kentucky oval being predominantly one lane. With the aggression seen, it also wasn’t a surprise that the series regulars — and even a few Chase contenders — often found their nights set back or ended altogether with a trip against the turn 4 wall as part of one of a track-record 12 cautions on the night.

Brandon Jones was the first of the 12 Chasers to find themselves in trouble. Jones was running just inside of the top 10 when contact with a spinning Justin Marks left the rookie heading to the garage area with heavy damage. Jones would return to the racing surface, but not until he was more than five laps off the pace. Jones ultimately finished 26th, 10 laps down.

Keeping with the last name trend, Erik Jones entered the Chase as the presumptive favorite to take the championship after leading all contenders with four wins in the regular season. Jones had the dominant car, and was driving inside of the top 5 on a lap 186 restart when he lost control of his machine under Ty Dillon, sliding up into the Richard Childress Racing driver and forcing a crash that eliminated both drivers.

Dillon would finish 27th after being disqualified when his team attempted to work on his car during the ensuing red flag. Jones followed in 28th.

Chase underdog Ryan Sieg also suffered a share of woes in the early stages, cutting a tire and spinning to force a caution on lap 115. However, Sieg was able to recover for a 16th-place result.

In the end, it was Sadler that got the best of the field, and with it became the first to punch his ticket to the Round of 8.

The XFINITY Series wil return on Oct. 1, when the field heads to Dover International Speedway for the Drive Sober 200.