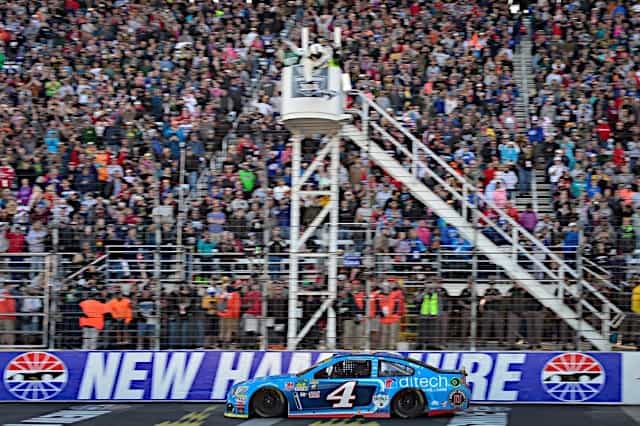 On a restart with six laps to go, Kevin Harvick lined up on the bottom lane underneath Matt Kenseth. The No. 20 car led 105 laps until that point, but could not hold off the No. 4 machine as the green flag waved for the final time Sunday afternoon.

Harvick started the 300-lap race from the 19th starting spot. In the Chase race at New Hampshire Motor Speedway last season, the No. 4 Chevrolet dominated, leading 216 laps, ultimately running out of gas with three laps to go. However, this year’s result featured Harvick celebrating in Victory Lane.

The victory secures Harvick a spot in the Round of 12, a week after finishing 20th at Chicagoland Speedway, one lap down.

“We had a good car all race long,” Harvick said. “As we went through practice yesterday, we had some little things that we talked about doing this morning and as we went through the race, we mads some small adjustments. At the end, we were able to keep ourselves up front with track position. They made a great call to leave us out two or three times and our car would fire off really good on the bottom.”

This is Harvick’s second career win at New Hampshire, with the first one coming a decade ago.

Kenseth had the dominant car late in the race, holding off Martin Truex, Jr., who led a race-high 141 laps, on multiple restarts. The restart that he felt was his worst of the day cost him the victory and an automatic advancement into Round 2.

“I thought we had a second-place car, at least,” Kenseth said. “They [the pit crew] gave me a shot to win and I didn’t hang on for it. They put me in a good position to win and I came home second. I feel like our performance is good we just have to get the finishes every week.

“I don’t want to say I care about points because you care and want to think about points, but it’s the furthest thing from my mind. On the last few restarts I just wanted to win. You’ve for the preferred groove for the restart, which is usually a pretty big advantage here. I felt good about my last chances on the last restart and I just didn’t get it done.”

Kyle Busch posted a third-place effort after spending much of the race in the back half of the top 10. On a caution with 37 laps to go, the No. 18 car came into pit while others stayed out, racing his way up third.

Brad Keselowski spent much of the afternoon running outside of the top 10, but was in a similar situation as Busch. He rebounded to finish fourth. Kurt Busch rounded out the top 5, scoring his first top-5 finish since Kentucky in early July.

Carl Edwards raced up to sixth after a commitment cone violation with 37 laps to go. Truex finished in seventh and Jimmie Johnson in eighth. Kasey Kahne was the first non-Chase driver in ninth and Kyle Larson completed the top 10.

Next weekend the circuit heads to Dover International Speedway, the final race of the first round of the Chase. Last year, Harvick won the event in a must win race. Heading into the final race Larson is sitting on the hot sport, five points ahead of his Chip Ganassi Racing teammate McMurray and Dillon. Stewart is 11 markers back and Buescher is in a must win, 30 points off the bubble.

Toyotas lead 280 of 300 laps, but a Chevrolet ends up in victory lane! I’m not a Harvick fan, but, I’d rather see him win than anyone from the Gibbs gang.