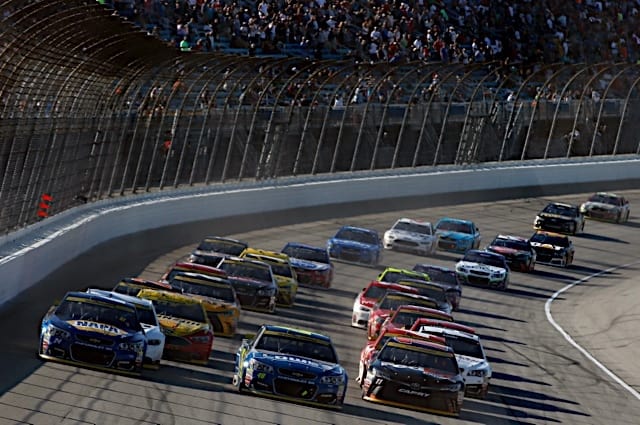 Sprint Cup: A Sleepless Week for 14 Men – Kevin Harvick, with a swift, unexpected pass on Matt Kenseth for the win Sunday at New Hampshire, avoided the weight of elimination come next weekend at Dover.

Along with Martin Truex, Jr., Harvick is now in rare air because when the field lines up for 400 miles next week at the Monster Mile, there are 14 drivers who will look back on Sunday’s Bad Boy Off Road 300 in either regret or gratitude.

Seeing nine Chasers in the top 10 in Loudon, don’t fool yourself into thinking they’re without pressure. Finishing fourth, Brad Keselowski sits 35 points above the 13th-place cutoff spot. Even from there, a devastating day can end his Chase season in the matter of seconds at Dover.

Jimmie Johnson knows best after suffering a cheap part failure that eliminated the six-time champion from Round No. 2. The No. 48 Hendrick Motorsports driver only managed an eight-place run, slotting him a semi-sweet 18 points above the cutoff.

Outside the top-10 finishers, Joey Logano and Austin Dillon still made the most of their difficult afternoons in Loudon, each rebounding from losing a lap to finish 11th and 16th, respectively. Dillon, in fact, called the race a “victory” after a weekend-long battle that started with a crash in Friday practice.

Despite the relief, Dillon is five points outside the cutoff heading into Dover. He joins Jamie McMurray, who fell back late to finish 19th, 23rd-place Tony Stewart and 30th-place Chris Buescher as those needing to be in ‘attack mode’ in next week’s elimination race. – Zach Catanzareti

XFINITY Series: Jones Needs Points, Dillon Needs a Win – A wild race at Kentucky Speedway shook up the XFINITY  Series Chase standings. Elliott Sadler punched his ticket to the Round of 8 with a win, and Daniel Suarez is in good shape to advance after finishing second. Other championship contenders, particularly Erik Jones and Ty Dillon, have ground to make up over the next two weeks.

Jones begun to separate himself from the pack and, by winning four races, had established the No. 20 team as the championship favorite. Dillon was winless going into the Chase, but he had put together enough good finishes to be a fixture in the top five in points for most of the season. However, a late-race crash knocked both drivers out at Kentucky and erased a lot of the solid work, which they put in during the regular season.

Jones still has a good chance to advance. He is only three points below the Chase cutoff, trailing drivers like Blake Koch and Brennan Poole. Despite some consistency problems, Jones has a higher ceiling than almost anyone else in the XFINITY Series and should find a way to reach the Round of 8.

Dillon is in a much more precarious position. The No. 3 team has shown race-winning speed only infrequently. Kentucky was a step in the right direction (until the crash), but Dillon remains in an over two year winless streak, one that will be difficult to snap in the next two weeks. Dillon could still advance via points as well, but the No. 3 team must work hard to make sure its title hopes do not slip away. – Bryan Gable

Camping World Truck Series: Jordan Anderson’s New Hampshire Race Fueled by Fans – Jordan Anderson made his plans to head to New Hampshire Motor Speedway to start-and-park after a blown motor late at Chicagoland Speedway put his Bolen Motorsports team in a tough spot. But always the entrepreneur, Anderson decided to give crowd-funding a try, and the idea took off, garnering enough donations to allow the driver of the No. 66 Chevrolet to run to completion.

We made it! Almost go time here at @NHMS – this is all because of you fans, I thank you. We made the impossible possible! pic.twitter.com/kcKy5GcPJH

You may be wondering what’s so important about a guy who typically finishes outside the top 15 making the race, but the reality is that the presence of teams like Anderson’s that work hard each and every week, hoping to make it inside the top 20 are part of what’s keeping this series going. This season marks the first in a long time where there are multiple races between having more than one truck start-and-park, something fans have railed against for years.

Perhaps the more important part of the whole thing is that Anderson just proved that this option is a viable one if done correctly, even at this level. Sure, we saw Kenny Wallace do the same thing during his 2009 XFINITY Series campaign with quite a bit of success, but that was planned nearly two months ahead of time, giving fans plenty of time to contribute. Anderson launched his campaign just a few days before the race and managed to gather 118 donors whose names adorned the rear deck lid, enough to buy the new motor needed to continue competing. Whether this method of sponsorship can be viable long-term has not been tested, but regardless, it turned out to be a feel-good story to come out of the series this weekend. – Beth Lunkenheimer

NHRA: Everyone Loves a First-Timer – It’s always great to see a first time winner and it was a guarantee that there would be one in Pro Stock at the AAA Insurance NHRA Midwest Nationals from St. Louis. Alex Laughlin made it to his first final round appearance and faced off against Bo Butner, who was making his fifth final round appearance of the season but is still hunting for that elusive first win.

“It’s an unbelievable feeling,” said Laughlin. “It’s not even real at this point. This has got to be a dream. The whole day has been a blur. Took it one round at a time and ended up coming up to the final. I was a little nervous but took a couple deep breaths and told myself ‘It’s just like any other round, just go up there and do your deal.’ As sson as I let the clutch out, I knew my crew chief gave me a good car.”

In Funny Car, it was DSR teammates Jack Beckman and Tommy Johnson, Jr. squaring off with Beckman getting the win with a 3.928 second, 324.51 mph run to Johnson’s 4.185 seconds at 231.40 mph. Beckman also beat Dale Creasy, Jr., John Force, and Ron Capps on his way to the finals.

Pro Stock Motorcycle came down to Jerry Savoie and Angelle Sampey with Savoie getting his first win of 2016 with a 6.933 second, 189.36 mph run to beat Sampey’s 6.852 at 195.85. Sampey went faster, but left the start early for a redlight and an instant disqualification, handing the Wally to Savoie. Savoie also beat Steve Johnson, Matt Smith, and Cory Reed in earlier rounds. Toni Montgomery

Sports Cars: An American Squad is Victorious in Belgium – Over the past couple of years, some American-based sports car teams have been defecting overseas over issues with IMSA. Tequila Patron ESM, who is coming back to IMSA full-time in 2017, was one of them. Another was Zak Brown’s United Autosports, which competes in the European Le Mans Series’ LMP3 class. A third team in that boat was DragonSpeed. This is a team run by Elton Julian that has raced off and on here in the United States using various equipment including one appearance in the Rolex 24 at Daytona using a Ferrari 458 Italia.

The team came to the Roar Before the 24 in January hoping to race two Mercedes SLS AMG GT3’s this year in the IMSA WeatherTech SportsCar Championship’s GT Daytona class, but couldn’t when Mercedes failed to pay the fee to make themselves an eligible manufacturer in the class (The fee is roughly a million bucks, which goes into a pot used to pay for things such as the TV deal with FOX Sports). As a result, the team chose to purchase an ORECA 05, pair it with a Nissan engine and have at it in the European Le Mans Series after racing at Sebring in March (the team finished fourth overall with Nicolas Lapierre, Hedrik Hedman and Nicolas Minassian).

On Sunday, DragonSpeed took their first overall victory in the 4 Hours of Spa-Francochamps. Using the driving lineup of Lapierre, Hedman and Ben Hanley, DragonSpeed managed to keep themselves in contention via pit strategy. Namely, the not-so-good pit strategy of many of their competitors. An ill-timed full course yellow resulted in a number of teams having to stop when the green came back out for their final stops. That put DragonSpeed’s No. 21 in front of all the full-time ELMS teams. Only Team WRT’s No. 47 Ligier JS P2-Judd of former F1 racer Will Stevens and the Vanthoor brothers (Laurens and Dries), which was making a one-off appearance, were in front of them.

However, Laurens Vanthoor was short on fuel and had to conserve. That allowed Lapierre to run down the No. 47 and take the lead late in the race. Once past, Lapierre pulled away at a rate of about two seconds a lap until Laurens Vanthoor pitted for a splash of fuel with a few minutes remaining. A late full course yellow with less than three minutes to go when Andrea Pizzitola spun into the gravel while running third guaranteed the victory for DragonSpeed. Despite the stop, Team WRT finished second, followed by the No. 46 Thiriet by TDS Racing ORECA 05-Nissan of Mathias Beche, Ryo Hirakawa and Pierre Thiriet. – Phil Allaway