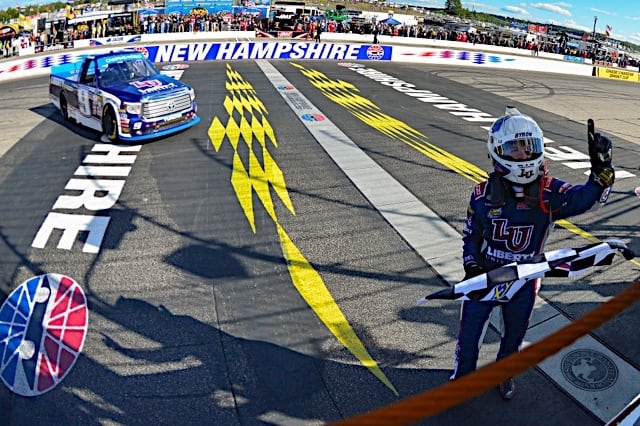 While the NASCAR Sprint Cup Series opened their Chase last weekend at Chicagoland Speedway, the XFINITY Series and Camping World Truck Series made their playoff debuts this weekend at New Hampshire Motor Speedway and Kentucky Speedway. Opinions on the post-season being implemented for each series varied, but fans and critics alike were hard-pressed to come up with arguments against the  first race of each series’ playoff.

Why? Because the majority of the action came from series regulars.

Saturday’s 475 miles of racing between Kentucky and New Hampshire saw only two Sprint Cup Series regulars — Josh Wise in the NCWTS and Ryan Blaney in the NXS — with the two combining to lead just 10 laps on the weekend.

In their place, the stars of each series were given a moment to shine.

Things all began in New Hampshire, where William Byron held off Kyle Busch Motorsports teammate Christopher Bell in the closing laps to cap off a dominant effort in the UNOH 175.

Entering as the presumptive favorite to claim the NCWTS title after earning five wins in the regular season, Byron made light work of the field for much of the afternoon, leading 161 of the race’s 175 laps. However, while the KBM rookie’s surge to Victory Lane (and the next round of the Chase) made a statement, it was the battles between his Chase competitors that brought supplied stories through the day.

First was Bell, who entered his first playoff as a dark horse due to the unpredictability supplied by his No. 4 team’s strong speed and struggles with consistency. For Bell, Saturday’s second-place run at New Hampshire was a key moment, where he hopes to have set the standard for the rest of the Chase.

Veterans Matt Crafton and Timothy Peters set themselves up to try to move on with solid top-5 runs. John Hunter Nemechek tip-toed around Cole Custer and salvaged a difficult day to take a ninth-place finish, with Johnny Sauter and Ben Kennedy following in 10th and 11th. However, Nemechek’s run came with an asterisk in the form of a post-race inspection failure. Now the three-time NCWTS winner nervously awaits Wednesday, when NASCAR typically announced penalties.

However, while Nemechek may find himself in a hole, it’s Daniel Hemric that’s left the most desperate of the Chase contenders. Going into the postseason as one of the favorites to survive to Homestead-Miami Speedway, Hemric will head to the final two races of the first round in need of large gains after suffering a 28th-place finish on the one-mile NHMS. After riding consistency through the regular season, Hemric will likely need to earn his first victory to keep his playoff hopes alive.

When the sun fell, attention shifted from the East Coast to the Midwest as the XFINITY Series began their first Chase, and despite coming at the same 1.5-mile Kentucky oval that saw just five cautions and 11 lead changes in July, the standalone race lived up to its slot in the playoff and set the tone for the series moving forward.

Erik Jones entered the day as a favorite to take both the race win and championship after dominating the speed charts over the weekend, but the pole-sitter was ultimately one of many who succumbed to crashes during a night best described as intense.

Jones was running for third on the race’s penultimate restart when he lost control battling with Ty Dillon for position on the tight, one-lane track. The Joe Gibbs Racing rookie slid up the track, into Dillon and started a crash that took out both drivers.

Both Jones and Dillon find themselves outside of the top 12 courtesy of the crash, joined by rookie Brandon Jones after the Richard Childress Racing driver was taken out as collateral damage when Justin Marks spun early in the race.

Now it will take a win, or a least two good finishes, to salvage Jones’ lone year in the XFINITY Series.

“It definitely looks like we’re going to have to run really well at Dover and Charlotte if not get a win,” Jones said. “Getting knocked out there is not a good situation for us. I thought we could probably get a win tonight and get locked in but we’ll have to do pretty good here the next two to move on.”

With the strongest car eliminated, Elliott Sadler made the most of pit strategy and fended off Daniel Suarez  down the stretch to earn his third victory of the season and clinch a bye to the next round.

Suarez came home second to sit firmly at the top of the standings for drivers without victories. Behind him a group of drivers including Brendan Gaughan, Ryan Reed, Darrell Wallace, Jr., Justin Allgaier, Brennan Poole and Blake Koch survived the night to earn finishes inside of the top 11 and put themselves in a good position for the final two races of the first round. The solid run comes as a reprieve for each of them, most noticeably Allgaier after sustaining left-front damage in a crash with Sam Hornish, Jr.

Speaking of Hornish, the former Indianapolis 500 champion was among a group of NXS part-timers to supply thrills of their own on Saturday. Matt Tifft rallied from a lap down late to earn a top 5 for JGR in his first NXS race since undergoing surgery to remove a brain tumor over the summer. Late model ace Josh Berry ran inside of the top 5 for much of the day before contact with the wall relegated him to a 12th-place finish, and Mid-Ohio Sports Car Course winner Justin Marks survived not one, not two, but three spins to salvage a 13th-place result.

There were 12 cautions throughout the event, a new record for the Sparta, Kentucky oval, and a glance at any of the race’s restarts would show why. Despite Kentucky largely being a one-lane track in its first year of competition after a repave, it wasn’t uncommon to see drivers going two, three and even four-wide as they battled for position.

With everything on the line and a rare chance to shine, the XFINITY Series field gave it their all on each of the race’s 200 laps, as did the Truck Series for their 175 circuits in New Hampshire. Without the typical assortment of Cup drivers in the field, the beloved veterans, underdogs and future stars of the NXS and NCWTS thrilled fans and added a level of excitement and intrigue to the postseason that should provide incentive for fans to care about the Chase.

NASCAR only got once chance to debut the Chase format for its AA and AAA series, and thanks to each series’ ability to stand alone and tell their own story, the playoff’s first races were largely a success. And while Cup drivers will likely return for the next five races in each series, of Saturday’s thrillers were any sort of indication of what’s to come in the finales at Homestead, then the first Chase for the XFINITY Series and Truck Series might be one that fans won’t soon forget.