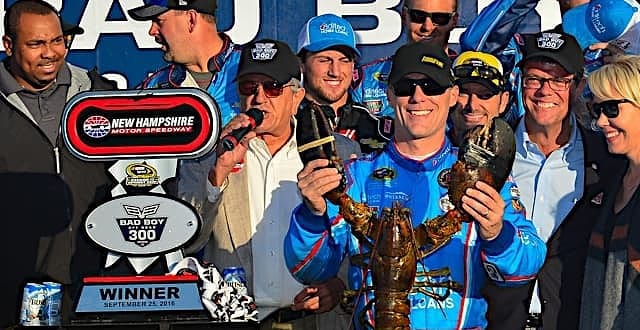 Who’s in the headline – While Joe Gibbs Racing cars dominated the event, it was Kevin Harvick who parked it in Victory Lane on Sunday afternoon at New Hampshire Motor Speedway. The JGR crew and affiliate led 280 of the 300 laps. Harvick took advantage of a late race, front row restart to wrest the lead away from Matt Kenseth and held the point for the last six laps to claim his 34th victory of his career.

What happened – Carl Edwards started on pole and led the first 30 laps before Martin Truex, Jr. charged to the front. Truex led all but five of the next 94 laps until the first caution of the race flew on Lap 125. After the caution period pit stops, Truex led 52 of the next 53 laps before losing the top spot to Kenseth.

The 2003 Champion led 105 of the next 116 laps, only relinquishing the point on green-flag pit stops and a period when Danica Patrick led for nine laps thanks to pit strategy. During the final four restarts of the race over the final 68 laps of the race, Kenseth held of charges from Truex and the Harvick over three of them. Unfortunately for Kenseth, he used up his rear tires repelling those advances and on the final restart, Harvick made his car stick on the bottom side to take the lead and fend off the field over the final six circuits.

Why you should care – Last year, Harvick had poor showings in the first two races of the Chase. He was forced to win in order to advance in the third race of the first round. This year, he is already assured of moving on. While the Team Penske cars seem to be struggling and Hendrick Motorsports is only beginning to look like it may be finding the speed to contend, Harvick’s Stewart-Haas Racing team is the only one that looks like it could upset the JGR apple cart.

What your friends are talking about – After Chicago and the lack of an encumbered finish, NASCAR came out and refined the stance on post race Laser Inspection System failures. Now, unless the failure is considered egregious enough to warrant a P4 penalty, it is not going to be a penalty. The bottom line is the cars failing the inspection are not outside of the rules, they are outside of the tolerances. The time has come for NASCAR to stop pussy footing around and make these calls black and white. If the car is illegal it is illegal. Whether it is an inch or 1/1000th of an inch. If they want to get these teams to take the rules seriously, they need to start throwing people out any time a car is illegal. If the car is damaged during the event, let the appeals board consider it. The different levels of penalties and enforcement over the voluminous rule book is simply confusing and unnecessary.

Kurt Busch‘s former girlfriend Patricia Driscoll was indicted on multiple charges related to stealing from the Armed Forces Foundation. She turned herself in to Federal court on Wednesday, entered a not guilty plea and was released on her won recognizance. While not racing related the charges are at least partly due to the investigative efforts of our own Jerry Jordan.

The Chase in 2016 no longer has names associated with each of the elimination rounds. Jill Gregory, the recently named Chief Marketing Officer for NASCAR, stated this week that sometimes you can out-clever yourself. The bottom line is the names didn’t serve a purpose other than to confuse people. Whether the sanctioning body will admit it or not, the names were dumb and fans didn’t like them. No truth to the rumor that this new found sensible thinking will permeate the organization and result in the elimination of the Chase altogether.

While the racing has been better in 2016, it is still working to draw the fans back into the sport. The Chicago television ratings came in at a 1.6 with 2.7 million households. Aside from rain-outs, this is the lowest rated Chase race ever. Hopefully, as the lost fans begin to realize the product is getting better and more competitive, the ratings will begin to climb back to pre-Chase levels.

The NASCAR community frequently loses members, but it hits especially close to home when it is someone in the media community. This week, Bob Margolis passed away. Bob was a man of many talents, who not only worked in racing media, but was an integral part of Geffen Records and RCA. Margolis spent 10 years battling multiple forms of cancer before finally letting go of his earthly body this week. Everyone in the media centers around the country who had the pleasure of meeting Bob is better for it.

Who is mad – Jamie McMurray was solidly entrenched in the back half of the top 10 all day long at New Hampshire. Unfortunately for him, he was on old tires over the last couple of restarts. As teams with better tires charged forward, McMurray was moved up the track at least once and ultimately found himself in 19th when the checkered flag flew. As a result, he went from solidly six or more points inside the cut line for the next round to five points out. McMurray failed to advance beyond the first round last year when Dale Earnhardt, Jr. passed him at the end of the Dover race. Now he rolls into Dover needing to finish five points ahead of the Kyle Larson and in front of the three other drivers still behind him.

Like McMurray, Chase Elliott was having a great race on Sunday. He spent the last half of the race in the top 5 and was poised to be virtually certain of advancing to the next round. Instead he was also on some older tires and was shuffled backwards to a 13th place finish. While he has run well over the last month and a half of the season, a top 5 would have allowed him to rest more easily before heading to Dover.

Greg Biffle is well past the peak of his career, but still shows flashes of the ability that won him titles in the Truck Series and XFINITY Series. The struggles of Roush Fenway Racing have been no more evident than on Biffle’s team. Sunday was no exception with the No. 16 coming home 33rd, three laps down. Next year is allegedly the final season of Biffle’s contract with RFR. With the struggles of the organization continuing to be evident across its entire roster of teams, it remains to be seen if Biffle will return in 2017.

Who is happy – Ryan Blaney was one of the drivers who changed tires early over the final spate of caution flags. As a result he went from the back half of the top 20, where he spent most of the race, to a 12th place finish. That result put Blaney one position ahead of his Rookie of the Year rival Elliott to score the Rookie of the Race award for this weekend.

Joey Logano didn’t have the speed in his car this weekend to run up front and in fact lost a lap during the extended green flag run at the beginning of the race. His team tried two different strategies during the event to get back on the lead lap. While neither panned out they eventually got the Lucky Dog with 32 laps to go. Giving the team the option to put fresh tires on resulted in a charge from near 20th, where he’d run all day, up to a finishing position of 11th.

Logano’s teammate Brad Keselowski was similarly lacking speed on Sunday, but he managed to stay on the lead lap throughout the event. He was in the top half of the teens for much of the race but similarly took fresh tires late in the race. He rode those fresh bolognas from 10th on lap 270 to a fourth place finish. The Team Penske teams are searching for speed, but if they can find it before they are eliminated, they will be able to look back on this weekend as an turning point for their season.

When the checkered flag flew: In his 566th career start, Kevin Harvick was victorious for the 34th time.

This is Harvick’s third victory of 2016.

Matt Kenseth crossed the finish line in second position for the fourth time in 2016.

This is Kenseth’s fifth top 2 run at the Magic Mile.

Kenseth’s runner-up run is the 28th of his career. That ties him for 28th on the all-time list with Joe Weatherly.

Kyle Busch rounded out the podium at New Hampshire.

Busch has 96 career top 3s which ties him with Kenseth for 23rd on the all-time list.

Ryan Blaney came home 12th to claim the Rookie of the Race award.

What is in the cooler – The racing in New Hampshire featured three on-track passes for the lead that were not part of restarts. However, the racing back in the pack was very heated. There were multiple strategies in play thanks to the extended green flag racing over the first 240 laps of the race. The drama that played out during the finish and the varying strategies was compelling. As a result we’ll give it four cold Old Brown Dogs from the Smuttynose Brewery.

Where do you point your DVR for next week – Next week is the elimination race for the round of 16. The series heads to the Monster Mile in Dover, Delaware. Coverage begins at 2:00 PM on Sunday, October 2nd. The race can be heard on local MRN affiliates and SiriusXM NASCAR Channel 90. The action will also be streamed on NBCSports LiveExtra.

What is it that Mike Neff doesn’t do? The writer, radio contributor and racetrack announcer coordinates the site’s local short track coverage, hitting up Saturday Night Specials across the country while tracking the sport’s future racing stars. The writer for our signature Cup post-race column, Thinkin’ Out Loud (Mondays) also sits down with Cup crew chiefs to talk shop every Friday with Tech Talk. Mike announces several shows each year for the Good Guys Rod and Custom Association. He also pops up everywhere from PRN Pit Reporters and the Press Box with Alan Smothers to SIRIUS XM Radio. He has announced at tracks all over the Southeast, starting at Millbridge Speedway. He's also announced at East Lincoln Speedway, Concord Speedway, Tri-County Speedway, Caraway Speedway, and Charlotte Motor Speedway.
@MNeffShortTrack
Previous Kasey Kahne Scores Fourth Consecutive Top-10 Finish
Next Entry List: Drive Sober 200