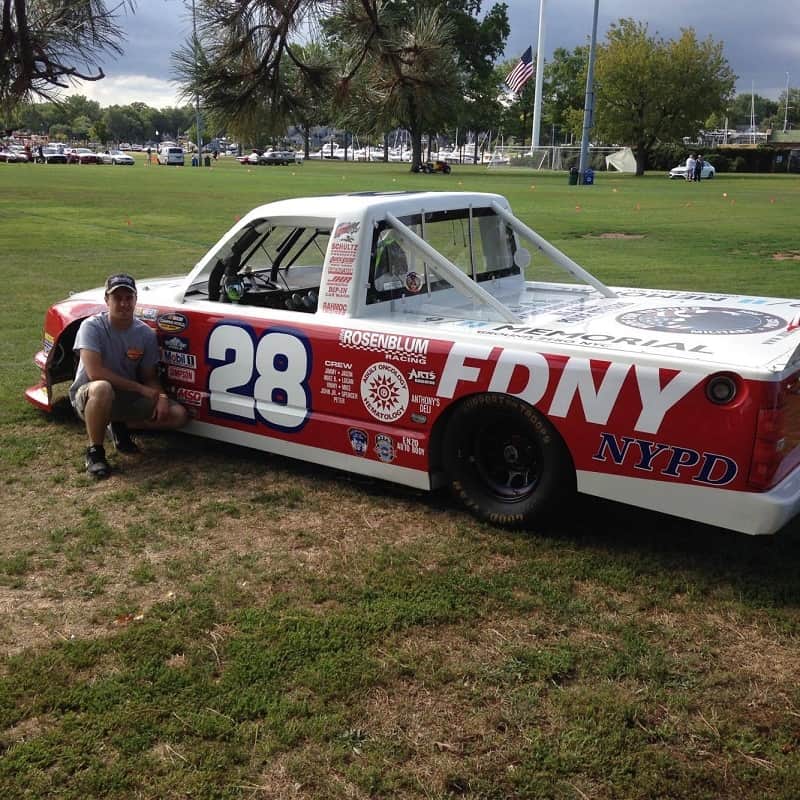 The Riverhead Raceway regular in the NASCAR Tour Modified division has been racing since he was seven, frequently visiting Long Island’s lone NASCAR-certified racetrack. However, come October, Soper will be stepping out of a Modified and entering Martinsville Speedway in a Chevy Silverado, driving for the New York-based FDNY Racing.

“It’s a dream of mine,” Soper tells Frontstretch. “I’ll be a little behind since they guys are all volunteers. It’s all for a good cause, but I’ll definitely be a little bit behind the eight ball with the equipment. The way I look at it is a car is a car.

“I should be alright. I’ve been told Martinsville has the same characteristics as Riverhead.”

Soper has made two Whelen Modified Tour starts, with a best finish of 17th at Thompson Speedway Motorsports Park in October 2015.

Soper is enrolled as a full-time student at Suffolk Community College, studying criminal justice while focusing on his racing career. The Manorville native looks to join Andy Lally and Steve Park as notable racecar drivers from Long Island.

FDNY Racing has competed in two Truck Series races this year, one with Ryan Ellis at Pocono Raceway and the other at Charlotte Motor Speedway with Andy Seuss. The team failed to qualify for the season-opener at Daytona International Speedway with Ellis behind the wheel.

Owned by Jim Rosenblum, FDNY Racing consists of volunteer crew members, including former and current FDNY and NYPD employees. The team competes part-time annually, generally fielding an entry for races at Daytona, Charlotte, Pocono and Talladega. Heading to Martinsville, it will be the first time since 2003 that Rosenblum’s team will attempt to compete at the 0.528-mile track.

“It’s going to be all about seat time, really,” Soper said. “The way I’m looking at is it’s my one opportunity and I’m going to take advantage of it. I’m not really overthinking it yet. It’s just another race — that’s how I’m looking at it.”

During the summer months, as Soper piloted his blue and silver No. 4 car, he caught the eyes of Mark Knight and his wife Rosanne, who own Draf10 Motorsports, Inc. The organization helped fund Ellis’ effort at Pocono, along with Seuss’ run at Charlotte.

While sitting in the grandstands at the 0.25-mile track, they witnessed Soper win one of four modified events en route to a fourth-place finish in the division standings. The couple, Soper and his father, Tom Soper, came up with funding to bring FDNY Racing to Martinsville.

“My expectations are to run the best I can,” Soper said. “I want to get a top-20 finish, but mainly the experience of getting exposed.”

Soper says NASCAR approved his application for a Truck Series license. He plans on competing in more races after Martinsville, including a possible run at a full Truck Series schedule in 2017 with Draf10 Motorsports depending on how he does in his limited action to conclude the 2016 season.

“They spotted me and notified me what they wanted to do,” Soper said. “We’re looking to go full-time next year, and hopefully it all works out. Mark and Rosanne want to start their own team next year and rent everything, leasing parts out from top teams.”

Congrats . Best of luck to all you guys . Mark let me know if I can help you guys out