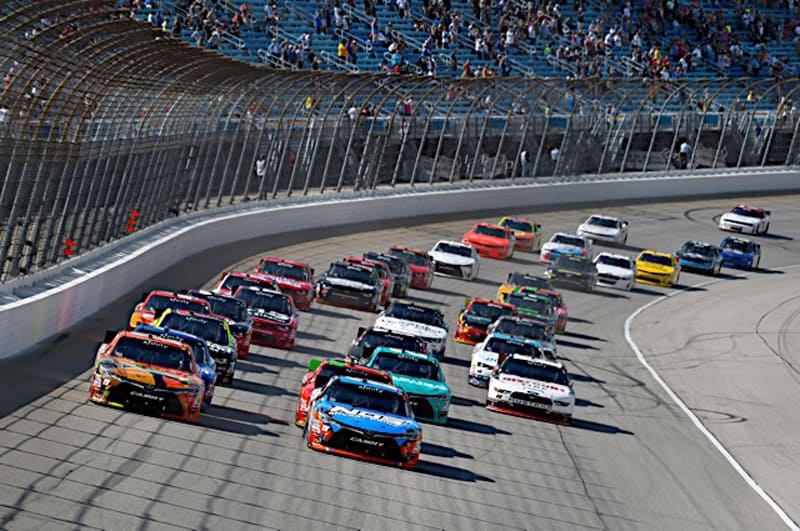 Who’s Getting Cut:
After Sunday’s NASCAR Sprint Cup Series race at Dover International Speedway, the series will make the first cuts of the 2016 Chase.

As things stand, it’s Jamie McMurray, Austin Dillon, Tony Stewart and Chris Buescher who make up the bottom four and will be out of contention should all remain constant. Meanwhile, Kyle Larson is in 12th, five points to the good, Kurt Busch (11th) is 15 points up and Chase Elliott and Carl Edwards are both 16 points ahead of the cutoff line.

It’s fair to say with a track like Dover that anything can happen — and typically, when it does happen, it is quick. Buescher, for whom making the Chase was a victory in itself, looks to be done barring an unlikely victory. Smoke, too, looks to be in trouble, but the deficit is small enough for him to turn it around.

Whether Stewart can move on is very much in the balance, but, just as has been the case throughout his career, if anyone can get it done, Smoke would be that wheelman.

The Monster Mile:
Dover has 24 degrees of banking in the corners and nine degrees on the straightaways. Nicknamed the Monster Mile, the track was opened in 1969 and was originally an asphalt surface until a repave 21 years ago in 1995.

This race will be No. 94 for Cup at the circuit, with the first race being won by none other than the seven-time champion himself, Richard Petty. Another multi-time champion, Jimmie Johnson (who has six titles to call his own), has the most wins at the track, with a record-busting 10. Johnson’s car owner Jeff Gordon, who will fill in for Dale Earnhardt, Jr. again, holds most of the other statistical records (four poles, equal with Ryan Newman; 18 top 5s; 26 top 10s; lead-lap finishes (32).

This is slated to be Gordon’s penultimate race, with Martinsville Speedway later in the Chase his final ride for the year. Are we once again seeing the end of Gordon’s illustrious and storied racing career? We thought so last year, so perhaps I shouldn’t even suggest it.

Sadler Wins XFINITY Chase Opener:
Here are the facts: Elliott Sadler‘s race win last Saturday in the NASCAR XFINITY Series at Kentucky Speedway was his 13th in 323 starts, his third of the season and his second in the last four races. Sadler took the lead with just four laps remaining and held off Daniel Suarez to pick up a hugely emotional victory.

“We fought through a lot tonight,” Sadler said post-race. “We had a 10th- or 15th-place car at best. We decided to come in, really take our time and work on it. We had good calls by Kevin [Meendering, crew chief] and the guys to get us in position. This team has no quit in it, we just fight to the end. This is a great way to start the Chase.”

Sadler, let’s not forget, finished ninth in the inaugural Sprint Cup Chase all the way back in 2004 and has finished second in the XFINITY Series championship in 2011 and 2012, but as yet has not won a series season championship. Off to a great start, perhaps this year is when Sadler finally gets it done.

The Margin of Victory:
How about a cool little racing stat? Kevin Harvick, race winner at New Hampshire Motor Speedway this past weekend, led the fewest laps by a 2016 race winner in the Cup Series, with just eight.

The next closest were Denny Hamlin at Watkins Glen International (10 laps led), Chris Buescher at Pocono Raceway (12) and Tony Stewart at Sonoma Raceway (22).

This statistic kind of surprised me in that there wasn’t a lower number than eight. I would have thought, without remembering the minutiae of each race, there would have been a smaller number – not least given the series has run three races at restrictor-plate tracks. I wonder if this particular statistic will change before the season has played out; I’m thinking yes. For now, it’s another (essentially useless) racing stat I’ll commit to memory along with all the other ones.

Ads! Ads Everywhere!:
I watched the race in real time this past weekend, which is something I almost never do given my Sunday schedule. And wow, did I remember why I don’t do that anymore. At times it feels like it’s one long series of commercials with the odd cutaway for a lap or two. CawsnJaws.com does a great job in recording the details for each race, and for Sunday’s (just over) 300-miler we saw 46 minutes of commercials in a 192-minute broadcast, plus another eight minutes of side-by-side ads.

So we’re looking at approximately 25 percent of the total race broadcast devoted to sponsor messages. In all, that works out at 57 companies advertising across 98 individual commercials.

I fully understand these sponsors help pay the bills, but there has to be a better solution, there really does. Maybe it’s something the new title sponsor could help tackle. Well, that is if we ever find a new one of those, right, folks?