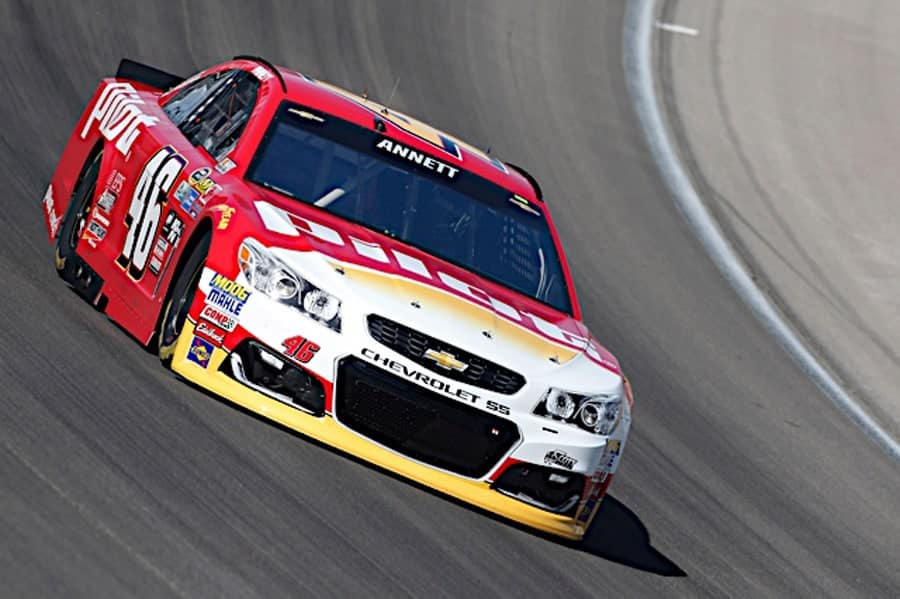 Michael Annett is in his third full Sprint Cup season, the second for HScott Motorsports. Admittedly so, 2016 has been one of the toughest years on the Iowa native since coming to NASCAR.

Before heading to Daytona in February, Annett had aspirations of performing better than 2015. The organization had experience coming in the door with Clint Bowyer making a one-year stop before replacing Tony Stewart in 2017 at Stewart-Haas Racing.

Through 28 races this season, Annett sits 37th in the championship standings, behind the likes of Dale Earnhardt, Jr., who has missed 10 races due to concussions, and just ahead of Jeff Gordon, who has just six starts this season.

As HScott Motorsports expanded, Annett knew that there would be some growing pains. However, a season-high finish of 20th is not something he had in mind. Thoroughly believing that he belongs in the Cup Series, the career of the 30-year-old is in limbo with eight races remaining in 2016 with the now uncertainty of his race team.

With Bowyer moving on and Annett not locked down for a new contract, HScott Motorsports is likely to shut down its Cup Series operations following Homestead, leaving him without a ride.

Prior to the New Hampshire race weekend, Annett talked to Fronststretch regarding his 2016 season, HScott Motorsports, his future and more.

Dustin Albino, Fronstretch.com: With eight races to go in the season how would you assess 2016?

Michael Annett: I think everybody is disappointed. Being the second year with HScott Motorsports and these guys, you want to go into your second year and improve on what you did the year before and we haven’t done that. I think that’s the most frustrating part. The biggest thing is even though we’re frustrated and not having the performance we want, we have a lot of fun. This team is like a family to me. I wouldn’t say it’s been a bad year because of the people that I’m surrounded with but the performance isn’t where we wanted it.

Albino: Where do you feel like HScott Motorsports has improved on from last year?

Annett: A little bit here and there, nothing mind-blowing and nothing that really sticks out. We had a crew chief change and when we’re kind of winding down the year, we kind of started over again and getting used to a new crew chief with the Hillman’s coming over. Everybody is trying to learn their way of doing things and its tough that late in the year.

Albino: What have the organization struggled on from last year?

Annett: Overall speed is the biggest thing. I feel like we unload and you want that first practice run to put you in the top 25 on the time charts and we’re usually back there in the 30s and it seems like we have to battle all weekend to get ourselves up there to where we should be.

Albino: After the last New Hampshire race in July, the No. 46 team obviously made some changes. How is the chemistry between you and Mike Hillman?

Annett: It’s really good. I’ve been at Germain Racing when I first came into the XFINITY Series about seven years ago and obviously the Hillman’s had a bunch of success there, all three of them being on Todd Bodine’s truck team. The foundation was there. Seven, eight years is a long time in this sport, so just getting used to how they do things and they are doing the same thing.

Albino: How does he compare to Jay Guy?

Annett: Everybody is very mellow, but the biggest thing is respect for your teammates and the guys that are working for you. I see a lot of similarities between Jay and Mike. To me, everybody seems like they are excited to come to work.

Albino: What element has Clint Bowyer brought to the organization?

Annett: He has a ton of knowledge. He’s been around the series, almost won a championship and has won races at the top of our sport. Taking his knowledge with him coming to these tracks 20 times and I’ve been here maybe 10 times, he can help me and he’s an open book. If you ask him anything he’s going to try and help you.

Albino: Has it been tough as an organization knowing that this was only a one year deal with him?

Annett: I don’t know if it is tough. Everybody knew going into it his situation. I think the way we look at it is everybody is here now and trying to get back between the No. 15 and our team.

Albino: In an interview last year you told me ‘I think the biggest thing to prove is that I belong here.’ Do you think you’ve improved on that since last year?

Annett: I wish I had done more. I think I have respect and my peers actually trust me and that I won’t do anything stupid and ruin their day. I think there are different levels of respect and I want to be known as not only a competitor, but one that can compete with these guys for race wins. I think the respect is there, but I still have a lot to prove.

Albino: What are some of your goals to close out 2016?

Albino: What’s Harry’s impact been on you since coming over?

Annett: I’ve looked up to Harry for a long time, ever since he came over with Turner Scott Motorsports. I remember looking at their equipment and watching Harry with his people and thinking it would be an organization I would like to be a part of. When this opportunity came up last year that was one of the biggest things, watching how Harry treats people. It was something that I always wanted to be a part of.

Albino: With the uncertain future of HScott Motorsports, how does that impact you as a driver?

Annett: If I showed up to the race track worrying what I was doing next year or even the week after this, it would be selling my guys short and I hope they feel the same way. We’re here to do our job and if you’re starting to think about other things or your future and not thinking about what you’re doing that weekend, I don’t think it’s fair to anybody.

Albino: When would you like to know or expect to know?

Annett: I would like to know now. It’s just a part of our sport. I’ve been around for a while now and you get used to it. The best way to put it is you’re only as good as your last race. That’s something that’s very true in our sport. You could be a hero one weekend and a zero the next. I live in the now and there are some stuff that we worry about Monday, Tuesday and Wednesday, but when we’re at the track that’s what we focus on.

Albino: How crucial are these last few races on your future?

Annett: I think every lap you turn is crucial for your future, especially when you are in a contract year. There are a lot of uncertainties, so the best thing you can do is go out and prove your worth and build your stock as much as you can and with nine races left in the year is the best time to do it.