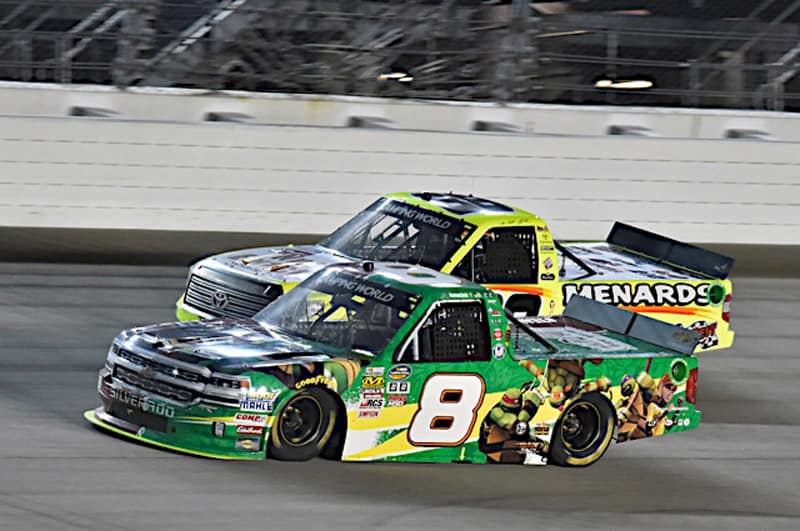 Last weekend in NASCAR was fairly interesting out on New Hampshire Motor Speedway.  For the most part, the Room of Doom didn’t play that much of a role (unless your name was John Hunter Nemechek).

Sunday afternoon saw the Sprint Cup Series return to Loudon for its second visit of the year, and the Chase was in full swing.

Pre-race was completely centered upon the ongoing Chase.  Once again, the race was really only previewed within the lens of the Chase, and I just don’t feel like that’s the best way to go about things.  The Chase is the Chase, after all, and it’ll work itself out.  Yes, as long as we have this (in my opinion, useless) system, you’ll have to go over hypotheticals, but the Chase cannot be the only way in which you look at these 10 races.

Sunday’s race was not all that exciting.  Sure, having green-flag racing is good, but there wasn’t all that much action — at least on TV. I don’t think viewers are getting the full story.  For all I know, there was plenty of good racing for position.  What did I see?  Not a whole heck of a lot.  There was good stuff shortly after restarts, but that’s somewhat typical.

Also, there was a glitch with NBC Sports Network’s NASCAR NonStop segments late in the race.  It seemed that NBC could not get the NASCAR NonStop graphic off of the banner.  As a result, viewers could not see the scoring bar.  Later on, NBCSN made the decision to convert a NonStop break to a regular full-screen commercial mid-break.  During that break, Michael Annett crashed out.  The issues were somewhat unexpected and I hope it doesn’t become a thing next weekend at Dover International Speedway.

Post-race coverage was also very Chase-centric — and that’s unfortunate, because if anything, the first round of this format is the absolute worst.  With so many Chasers, everything else gets lost.  Additionally, some notables didn’t make the actual post-race show.  For instance, Martin Truex, Jr. was interviewed after the race, but it didn’t air until NASCAR Victory Lap.

The race was not the greatest to watch, but that was only partially NBCSN’s fault.  It’s not NBC’s fault, after all, that much of the race really wasn’t all that exciting, because that will happen from time to time.  However, such a strict focus on the Chase can leave NBCSN unprepared to really talk much about anyone outside of the Chase.  If one of the non-Chasers were to kick it up a notch next week at Dover, I’m not sure what it would do.  My hope is that it gets a little better once we get into the next round and we have less Chasers.

There were some bright spots on the broadcast, though.  For instance, there was a look at Kevin Harvick’s final pit stop from last year.  Steve Letarte used the footage to show that the shaking of the dump can on Harvick’s stop may have cost him the fuel that he needed to make to the end.  Interesting; I’d never thought about that before.  Air bubbles being introduced via gyration.

Saturday saw the Camping World Truck Series teams take on the 1.058-mile track in New Hampshire, and it turned into a bit of a wreckfest.

It was also the first race of the new-for-2016 Chase. Much like NBCSN, FOX Sports 1 spent its pre-race show talking about the Chase.  However, it did take time to preview the race itself, unlike NBCSN.

During the race, the Chasers were not the only competitors that got coverage, as non-Chasers such as Cameron Hayley and Ben Rhodes got a good amount of coverage.  Viewers got to see a decent amount of action for position.

Granted, that action wasn’t at the front of the field, but there was a good reason for that. Quite simply, William Byron was kicking butt.  He might as well have been MC Hammer in his prime.

26-year-old songs aside, no one was touching Byron Saturday, not even Rick James.  While Byron didn’t lead every lap, this was one of the most dominant wins in the Truck Series in quite some time.

I did find the coverage of a battle between Nemechek and Cole Custer around lap 70 to be forced.  Sure, they’re racing each other for position; they do that darn near every week.  Yes, we know that Nemechek and Custer had their coming together at Canadian Tire Motorsports Park a few weeks ago.

Do I think Custer’s going to spend the whole dang Chase trying to figure out a way to enact payback on Nemechek?  I doubt it.  Yes, drivers have long memories.  Just think back to the Greg Biffle–Boris Said spat at Watkins Glen International in 2011.

In Custer’s case, why would he blatantly hurt his season just to get back at him?  Everyone’s watching him and will be for the rest of 2016.  If he so much as thinks about it, he’ll get the horns.  We saw what happened to Matt Kenseth last year after he intentionally wrecked Joey Logano.  Don’t need a repeat of that garbage.

The coverage of Daniel Hemric’s incident produced a couple of question marks. He spun out in turn 1 on lap 25 after cutting both left-side tires.  Then, there was the fire under the truck, which the booth thought was due to rubber igniting.  Probable, but FOX Sports 1 also got a shot of Hemric driving back to pit road with a glowing left rear brake rotor.  That’s a telltale sign of brake issues, the exact problem that blew out the tires to cause the original spin.

All in all, decent coverage — certainly better than the Cup broadcast. Take a few notes here and there, NBC, please.

Next weekend, the Sprint Cup and XFINITY series make their second visit of the year to Dover.  Meanwhile, the Camping World Truck Series travels out West for a standalone event at Las Vegas Motor Speedway.  We also have the IMSA season finale, the Petit Le Mans presented by Harrah’s Cherokee Resort Casino, at Road Atlanta.

There have been a couple of changes in the IMSA coverage from Road Atlanta.  Originally, there was supposed to be TV coverage of Petit Le Mans beyond 6 p.m. Saturday on FOX Sports 2 after Camping World Truck Series qualifying.  That is no longer the case.  The last three hours and change will be exclusive to the Internet.  Also, the highlighted replay of the race that was originally scheduled for 5 p.m. Sunday on FOX Sports 1 is also no more (there’s a conflict with a NWSL Playoff game).  The only highlighted replay of Saturday’s race will be 7 p.m. Monday night on FOX Sports 1, immediately after NASCAR RaceHub.

Next week’s setup is going to be a little different.  I will be at Road Atlanta covering the IMSA finale.  Keep your eyes peeled for coverage on the site from the track.  As a result, Couch Potato Tuesday for next week has been pushed back one day to Wednesday.  Why?  Quite simply, it gives me the necessary time to watch everything.  Both the XFINITY and Camping World Truck series races occur during Petit Le Mans.  Watching the Cup race on Sunday might be difficult if the housekeeping staff is in my hotel room during the race.

Regardless, next Wednesday’s special edition of Couch Potato Tuesday will cover the three NASCAR races from Dover and Las Vegas.  The Critic’s Annex this week will cover the action at Kentucky Speedway.  Next week’s Annex on Oct. 6 will cover Racing Roots, a new show that premieres Sunday night on NBCSN after the Citizen Solider 400.  I guess it is going to profile a different driver on each episode (the first one is on Harvick).  You may have heard it being promoted during NASCAR America Post-Race on Sunday.  They claim that its pretty dang good.  I’m looking forward to it.

If you have a gripe with me, or just want to say something about my critique, feel free to post in the comments below.  Even though I can’t always respond, I do read your comments and I’m happy with the increased number of comments so far this year. Also, if you want to like me on Facebook or follow me on Twitter, please click on the appropriate icons. If you would like to contact either of NASCAR’s media partners, click on either of the links below.

uh newsflash here – it’s not just the round of 16 that has hurt the race broadcasts & NASCAR in general but the chase concept overall.

The chase is killing the “product” coverage, all year long.

The setup for the Chase has just about ruined NASCAR racing all by its self !!!!! By the way Phil – I love your columns ! ! I agree with you almost 100 percent of the time !! Keep up the good work !

One thing I’m sick and tired of seeing during race broadcasts is the constant standings with the caveat, if the race ended right now here’s how they stand. Well guess what, the race isn’t ending right now so this is pointless. During the truck race, every time they showed the standings as of right now something would happen to shuffle everything around. The only time it makes sense to show the standings is after the race.

Phil, the Chase focus is so tight that NBC did not mention the altercation between AJ and Ryan , that lead to AJ spinning out Ryan on the cool down lap after the race. I think the only way anyone would know about it is if they watched Tuesday Race Hub during radio active , thats when it was mentioned.