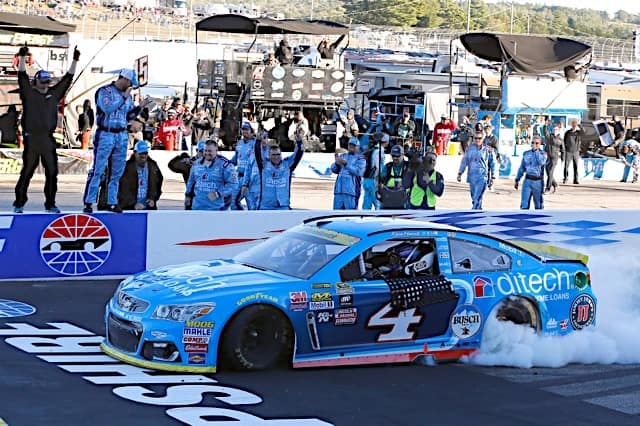 For 292 laps, it looked like Toyota had done it again.
Carl Edwards took the pole. Martin Truex, Jr., had a rocket ship a week after a Chase-opening win at Chicagoland Speedway. Matt Kenseth was strong, and Kyle Busch lurked just a few positions back.
Joe Gibbs Racing and Furniture Row Racing combined to dominate much of the day at New Hampshire Motor Speedway. However, there was one thing they failed to account for down the stretch.
The Closer.
Kevin Harvick stole the lead and the win late to claim his third victory of the season and clinch his way into the second round of the Chase. Behind him, a litany of Chasers including Kyle Larson, Kurt Busch and Austin Dillon dodged disaster to keep their playoff hopes alive.
Was Harvick’s win enough to elevate him back atop our rankings? How did the rest of the 16 Chase contenders fair?
Let’s have a look and see.

“Ahh, there’s the Closer we all remember so well. Onto the Round of 12.” – Aaron Bearden, Frontstretch
“I told you we hadn’t heard the last from Kevin Harvick in the Chase.” – Jim Utter, Motorsport

“I LED THE MOST LAPS AND ALL I GOT WAS THIS LOUSY ‘SEVENTH PLACE’ T-SHIRT.” – @AnnoyingRaceFan
“He can run fast almost anywhere, but putting complete races together is still a concern.” – Bryan Gable, Frontstretch

“Loudon is Kenseth’s happy place. Cooking turn three on the outside of Harvick, it was a mistake that cost him a third straight win at the 1-mile track. Despite the loss, Kenseth needed a competitive run to boost him into next week’s elimination round at Dover.” – Zach Catanzareti, Frontstretch

“Logano was lucky to finish where he did after falling a lap down and twice missing out on the Lucky Dog. When he finally did get back on the lead lap, he was really too far back to make any challenge for the lead, but rallied enough to hold onto fifth in the Chase standings.” – McCole

“Surprisingly struggled, but nearly got a top 10 anyway. That will keep him in the championship hunt.” – Gable

“Needs to stop all the self-inflicted wounds on pit road.” – Utter
“HIS PIT CREW IS SO GOOD, SOMETIMES HIS TIRES RUN AWAY FROM INTIMIDATION.” – @AnnoyingRaceFan

“Finished much better than he ran.  Sometimes that is how you win championships.” – Gable
“That was a season-saving rally in the last 50 laps. Can Busch make anything of it?” – Bearden

It’s a couple Hendrick Motorsports teammates filling the spots just outside of the top 10 after New Hampshire. For one, a good run at Dover next week should equal advancement in the Chase. For the other, however, cracking “The 10” is about as good as things are going to get.

Chase Elliott (114 Points) – “The goal for this rookie in his first Chase it to survive the first round. So far, so good.” – Bearden

Kasey Kahne (11 Points) – “Where were all these top 10s a month ago when he really needed them?” – Gable