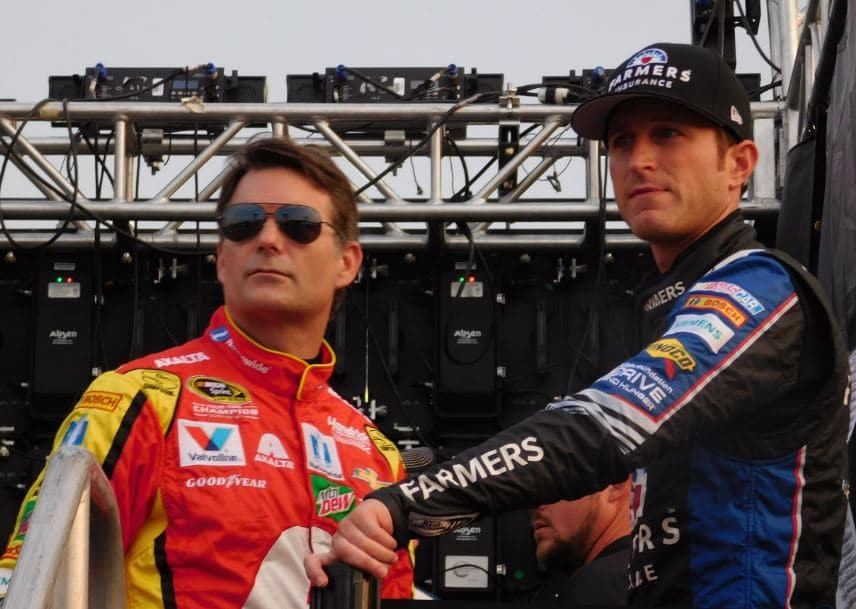 This weekend’s race at Dover is a much bigger race than it was three years ago. Then, it was the third race of the Chase, an important part of a 10-race stretch of events that would lead to the Sprint Cup championship.

Today, it is still the third race of the Chase, but serves as the final race in the first round of the playoffs. It is the most important race of the season for fourteen drivers who are not already locked into the Round of 12. Because after this race, four will have their season effectively end as they are dropped out of the title hunt.

Only Martin Truex, Jr. and Kevin Harvick are secure in the next round, and while drivers like Brad Keselowski have a large points lead over the cutoff position held by Kyle Larson, anything can happen – and likely will. Both Kyle Busch and Jimmie Johnson have seen points positions most thought were secure going into the final race of a round evaporate due to issues. So no drivers are really safe, and none are really out, either.

For Jamie McMurray, Tony Stewart, Austin Dillon and Chris Buescher, the only way to guarantee a berth in the Round of 12 is to win. For the other 10 drivers, a win would go a long way.

But there are 24 other drivers in the field. Will any of them be able to play Chase spoiler at Dover and keep an automatic berth from occurring?

Look, Dover is about as close as you’re going to get to having a sure-fire Chase winner. There has never been a season under any Chase rules where the second race of the season at the Delaware track wasn’t won by a Chase driver. And if you look at the previous 25 races at the track, only six times has the winner been a driver not in this year’s Chase.

But it’s not just Dover that’s a good track for Chasers, it’s the whole playoff system in general. In 122 Chase races all-time, only 21 times has the winner been a non-Chaser. That includes drivers who were knocked out of an earlier round and therefore not eligible for the title. Drivers who went into the final 10 races of the season with no shot at the title whatsoever? They’ve only been able to go to Victory Lane 17 times.

Notable wins? Four Talladega victories between Brian Vickers, Dale Jarrett and Jamie McMurray, and Denny Hamlin’s 2013 triumph at Homestead after missing a handful of races with an injury.

No non-Chase qualifying driver has won in the back third of the season since Hamlin’s win. And don’t expect them to any time soon. Because in this iteration of the Chase, winning means everything because a win essentially keeps you in the Chase. With 13 different winners this season, it’s likely that it will be one of those in victory lane at Dover because, honestly, who else could really pull off the feat? All the teams good enough to win have already won—with the exception of the No. 88. But Gordon hasn’t been on fire during his substitute stint this season, so why expect him to win this weekend?

Kasey Kahne? Getting faster but not there yet. Greg Biffle, who has won multiple times at Dover? Not looking strong at all.

If anybody surprising were to win this weekend, I’d put my money on Chase Elliott. The rookie driver had a great run at the Monster Mile earlier this season and with some momentum on his side once again he could be a very real threat for the checkered flag.

But he’s a Chaser, and that’s what Chasers do: they win. Don’t expect anything different this weekend. One of your title contenders will be in victory lane.

Anytime there is rain in the forecast at a track without lights, watch out. There is currently a 60% chance of rain in the forecast for Dover on Sunday, so there’s a chance for just about anybody on track to take the lead due to strategy and win when the rain falls. Just ask Chris Buescher about that, who went from not even being in the top 30 in points most of this season to making the Chase due to a lucky Pocono win.

Hendrick Motorsports seems to have found something these past couple of weeks. Even Alex Bowman and Kasey Kahne have had top 10 runs the past two races. This week, Bowman is out and five time Dover winner Jeff Gordon is in. Never count out the four time champion, especially as he gets more comfortable in the No. 88 Chevrolet and with crew chief Greg Ives.

This is also a very strong racetrack for Kahne, who is riding a three race streak of top 10 finishes at “The Monster Mile.” Kahne has only two top 5s this year, but one of those was a fourth at Dover in spring.

By the way, take a guess at who has attained the third most amount of points at Dover the past ten races. Brad Keselowski? Martin Truex Jr.? Even “Concrete” Carl Edwards? No, no, and no. Clint Bowyer is the correct answer, and even in a down year the Kansas driver finished 12th in the spring race.

Finally, a lot of people call Talladega the wild card of the Chase, along with maybe Martinsville. If there were a third wild card race in the Chase, it would be Dover. We’ve seen cars flip at Dover within the last six years, and just this spring nearly half the field was involved in a massive accident on a late race restart.

And even if the cars aren’t piling up, this track is still one of the toughest to race at on the entire NASCAR circuit. Go load up any NASCAR video game and make a few laps at Dover, then try to get on pit road. Even in video gameland it’s incredibly difficult to effectively get on pit road during green flag conditions. Dover also historically has had the smallest pit stalls in the sport, and remember this is all just on pit road.

I’ve taken media pace car rides at Dover and Richmond at about half the speed a Cup car does. Richmond was easy; it was intense but it was like hitting 70 mph on the beltway getting there. Dover, though, felt like a banked roller coaster. For a mile track, these cars are reaching ludicrous speed. The last time qualifying wasn’t rained out, the 2015 spring race, the pole speed was 160.121 mph. Last week at Loudon, a track very slightly bigger than Dover, the pole speed was nearly 25 mph slower.

When you combine speed with a tight race track and an even tighter pit road, you have a race where essentially anything can happen. It’s not a lock that there will be a non-Chaser in Victory Lane on Sunday, but it’s definitely a possibility that shouldn’t be ruled out.