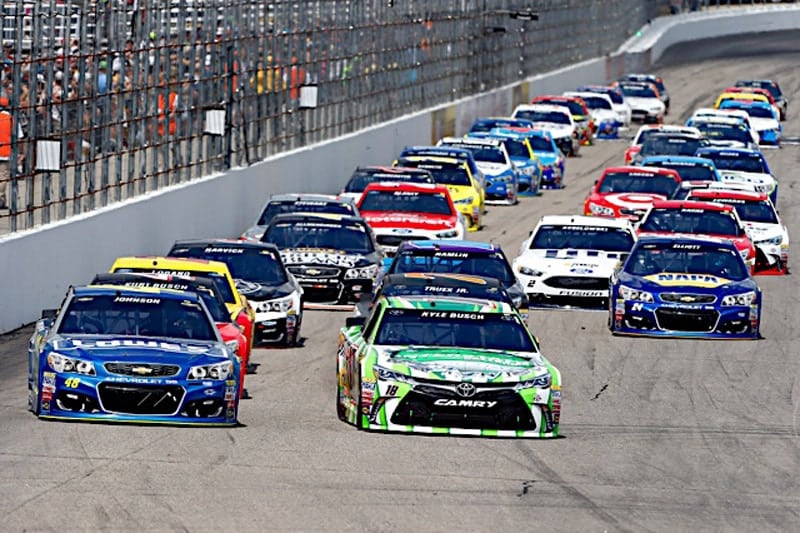 After Martin Truex, Jr. and Matt Kenseth combined to dominate at New Hampshire, it was Kevin Harvick walking away with the victory.  Is there a chink in the Joe Gibbs Racing/Furniture Row Racing armor, and was Harvick’s performance a preview of how the Chase battle could go as well?

Mark Howell, Senior Writer: I didn’t see the Truex, Jr./Kenseth stumble at New Hampshire as a problem with Toyota; I their woes as a sign of the true strength of Harvick’s team at Stewart-Haas. When everything’s working properly, “Happy” is a tough driver to beat. His frustration over botched pit stops was addressed early enough in the season to enable his crew to make the necessary adjustments. Quick, precise pit work actually helped Harvick gain track position, and that’s what he needed to upset the Toyota parade toward Victory Lane. Given that the No. 4 team seems to be hitting its stride right now, it’s going to be a very interesting eight-race run to the title.

Dan Greene, Webmaster: Toyota is as good as ever, Stewart-Haas and specifically Harvick’s pit crew is finally rising to the challenge. As long as the good pit stops continue I think Harvick wins another championship, with Truex close behind.

Amy Henderson, Senior Editor: I think the JGR/FRR juggernaut is still the team to beat, without a doubt…but that said, beating them isn’t impossible.  They don’t have as big an advantage as they did in the first half of the season, and Harvick has really stepped up his game.  I do think Harvick and maybe Brad Keselowski have the best chance of stopping the Toyota train.

Dover, coming up this weekend, marks the first Chase elimination.  Right now, Jamie McMurray, Austin Dillon, Tony Stewart and Chris Buescher are the bottom four…can any of them pull off a miracle and advance?

Greene: Chris Buescher is definitely out, he just doesn’t have the equipment to compete in the Chase. Smoke has the talent, experience, and equipment; he just needs to put together a solid race and he’ll advance. Jamie McMurray and Austin Dillion are about the same in terms of equipment, but I’d give the edge to McMurray because of his experience.

Henderson: If they were at most tracks, I’d say all four were done…but this is Dover, and a small mess can become a big mess very quickly, and a part failure (just ask Jimmie Johnson) or a crash can easily put one of the others out of the game…but it won’t happen to four of them, so I’d say that McMurray has a slightly better shot than Austin Dillon, but one and maybe, just maybe both of them still has a fighting chance to move on.  Smoke would need some massively bad luck from a lot of people or a win, and Buescher would need a miracle.

Howell: My guess is that Stewart and McMurray have the best chances at making the cut after Dover this weekend. These two have tons of experience and very capable race teams that can get them over the hump and into the second round. Buescher has been in over-his-head since Chicagoland, and conditions at RCR seem shaky enough to knock Dillon out title contention. Smoke’s been lamenting his status as Sir Complain-a-lot in NASCAR, so look for him to crack the top-twelve after Dover.

NASCAR has said that over-the-wall pit crews could be cut from six to five in 2017 with the idea that it will cut the cost of an extra crewman and improve pit road safety.  Is it the right move for the sport?

Henderson: I don’t think it’s the right move.  It might save a few bucks, but it’s not going to level the playing field in any significant way, and there’s no need for a change.  I can’t see eliminating a tire carrier as a great way to make pit road safer; it’s more likely to add to the chaos, if anything.  NASCAR doesn’t need to make tweaks of this kind unless the teams are asking for them.

Howell: Anything to save money, I guess, but it seems that every position on a pit crew right now is relevant to servicing the car. I remember when NASCAR dropped the number to its current level by getting rid of the catch-can man; it eased over-the-wall traffic, but it also robbed teams of a utility-type crewman who could serve as a backup if things suddenly went wrong, or who could observe the stop and make last-minute adjustments. Since the trend in crews seems to be selecting pit personnel from a group of trained/qualified people (like they do at Stewart-Haas Racing), I’m not sure if saving money is the primary reason for making this rule change.

Greene: I think one less person per team on pit road will things even more dangerous. There will be even more pressure on the remaining 5 people and an increased chance for mistakes. It’s not going to save any money for the big teams, but it may help the little guys out.

Jimmie Johnson is always a favorite going into Dover, but he’s struggled the last couple of seasons overall, and while a win this week would send him to the next round, he’s not a title favorite. Can Johnson win a seventh title before he’s done?

Howell: The No. 48 team is gaining late-season momentum. Had it not been for that speeding penalty on pit road at Chicagoland, Jimmie might be slotted already into round two of the Chase. This race entry can never be counted out in the post-season. As long as Johnson and Knaus are teamed together at Hendrick Motorsports, a seventh Sprint Cup championship will be a matter of not “if”, but “when”. It might just come this year.

Greene: It’s no mistake that all Johnson’s championships are in the Chase era, Johnson and Company have the Chase tracks figured out. But he doesn’t have a lock on the current Chase format. I think he makes it to the Round of 8 and that’s as far as he goes this year.

Henderson: Can Johnson win Dover? Absolutely.  Can he win the title?  That’s another story.  Tony Stewart said it earlier this week: the driver is becoming a smaller part of the equation, and that also shrinks part of why Johnson won six titles.  Johnson is good enough to win another championship, but if he doesn’t have everything else in place, it won’t happen.