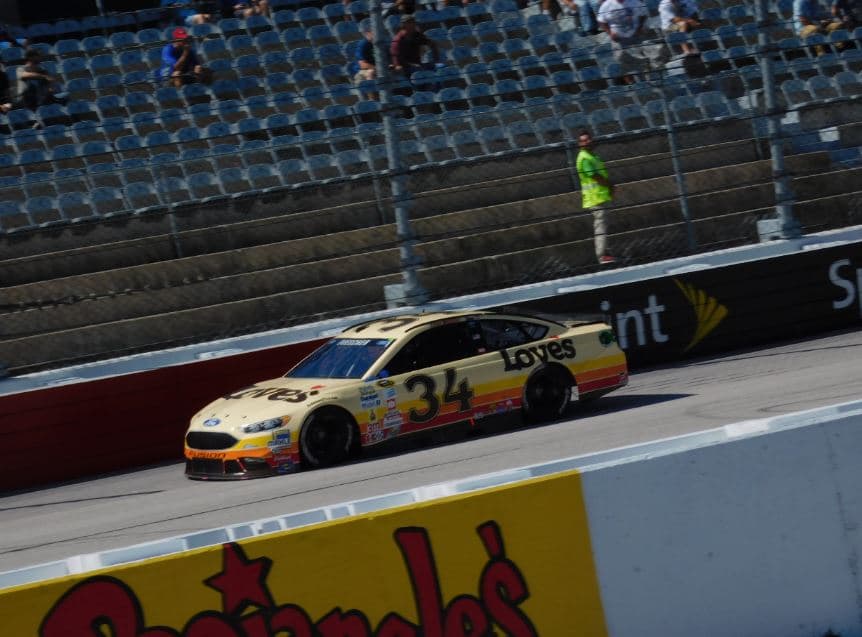 This Sunday will bring about the first round of eliminations in the the Cup Chase.  That means that the feel-good story of Chris Buescher and his appearance in the Chase will come to end when the checkered flag flies.  That seems like an easy statement to make as Buescher sits in 16th place and is 30 points behind Kyle Larson who is holding down the 12th spot.

Let’s be realistic.  Buescher and his team have rarely shown the speed to keep up with the lead lap cars this year.  That he gained a win through smart strategy should be applauded but to think that he really should be part of the field of the 16 chase cars is a bit of a stretch.  But who cares!

Good for Buescher and Front Row Motorsports.  He and his team may come out as one of the big winners this year.  Sure, he’s not going to be hoisting the championship trophy at Homestead and enjoying all the spoils that come with it, but as a whole they’ll be able to feel good about things.  The reason: the points.

Without the Chase, Buescher would have likely continued to float about in the points standings somewhere in the latter part of the 20s.  Might he have caught Casey Mears by season’s end?  Perhaps, but even that would be doubtful.  Thanks to making the Chase, however, Buescher is now assured of, at the very least, a 16th-place points position.  Because of the way the field is reset, even with poor race performances that come with distant points finishes, he is unable to fall farther than 16th.

Consider the swing, from 29th or so to 16th.  That’s a rather large gap.  And the money that should come with it should indicate that.  The exposure that Buescher & Co. have gotten from the Chase is one thing and should help them to attract sponsors in the future in the hopes of better FRM.  Those are negotiations that are up in the air.  But being that FRM is a charter member in Cup and that the money distributed at the end of the year is awarded by points, the bonus the team should get could be close to double what it might have been.  There’s the real feel-good story for the team.

So while Buscher is limping around Dover, knowing that he’ll be out of contention for the championship, he’ll likely be doing so with a smile on his face.  That Pocono win looks better all the time.

Happiness Is…Stewart.  Another name likely to be crossed out of the championship contender list this Sunday is Tony Stewart.  His jubilant win at Sonoma seems like ages ago.  Since then, Stewart’s inconsistent and middling results have seemingly been justification for the why the three-time champion should retire.  That he’s piping up about how he’s looking forward not to race in NASCAR next year, where engineering has become the main focus of the sport, is a dig at the powers-that-be running the sport, but his frustration also ignores the investment his fans have in him.

The angry Stewart aside, having him eliminated from the Chase does not make it any more or less interesting but does take his swan song out of the equation.  What it might really do is bring in the reality that these final races are the last time that he’ll be taking laps in a competitive fashion, that for all his blunderbuss that he has been a wild talent to watch and that, like most great athletes, it is time to enjoy the final moments and then watch them walk away.

Happiness Is…Larson.  Sure, the standings may indicate that there’s a Chase bubble and that some drivers might be able to eke their way into the next round of the Chase with some kind of miraculous performance at Dover.  That’s the hype machine at work.  The real battle looks to be between Larson and teammate Jamie McMurray, with the former sitting in 12th and five points ahead of the latter.

The race between these two should prove to be the best one on the track, provided that neither of them face any mechanical challenges.  Larson led during the Dover race in May before taking second, which appears he may be ready to send McMurray out of the Chase.  Meanwhile, McMurray has just two top-5 finishes at the track in 19 races, which trends toward Larson advancing.  For the team, having just one driver advance may seem bittersweet but really, just having them both make the cut was a serious step in the right direction.

Happiness Is…Shrinking.  Usually when the tagline has to do with something decreasing in size the focus is on ratings.  That topic would be an easy one with the numbers from New Hampshire showing that six or seven people and maybe a gerbil tuned in to watch.  OK, they weren’t that low.  Instead the focus here is on the fact that NASCAR is looking to decrease the number of over-the-wall crew persons for next year.

The change would be for two reasons.  One of the hopes is that such a reduction would help the mid-pack teams by lowering the costs associated with carrying what would be considered currently an extra person.  (NASCAR made no comment about the people who may be put out of a job.)  The better reason for such a move would be to increase the clutter on pit road during yellow-flag pit stops and take people out of harm’s way.  Pit road has been one of the focal points for NASCAR recently, from the timing lines, to the removal of NASCAR officials, and it seems that the organization is looking at another way to make the environment safer.  That seems like a half-decent idea.

What if it rains and Buescher is leading? How long will Brian wait?

Upstate24fan
Reply to  Bill B

If you make the Chase, you will finish no lower than 16th. If you make the final 4, you finish no worse than 4th. However, for all other eliminations, those drivers eliminated in the rounds of 12 or 8 lose the bonus points associated with advancing in the Chase. At the end of the season positions 5-16 in the points are decided by the amount of points scored in the final 10 races.

Thank you!!!!
I remember reading about this a year or two ago but couldn’t remember the exact way it worked.

Stewart hasn’t ignored his fans. A lot of his fans either became fans before he was a NASCAR star (like I did) or learned about other forms of racing due to his extracurriculars. Wherever he goes and whatever he does, they’ll follow him, just like when a driver switches teams and/or sponsors within a series.