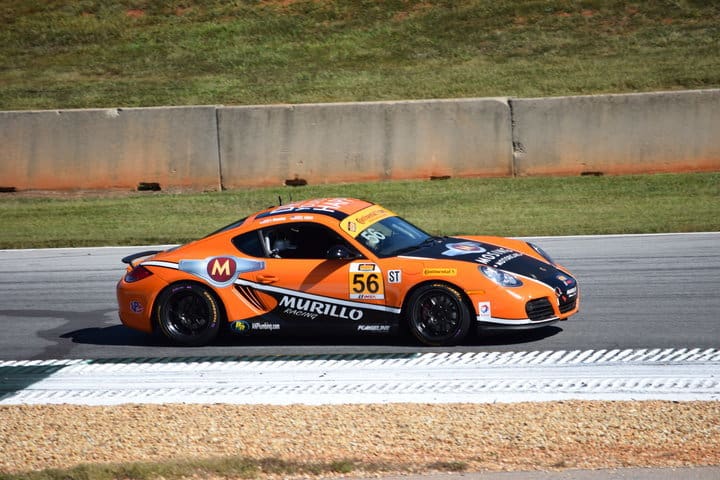 Thursday morning brought cooler temperatures and lower humidity to Road Atlanta as the IMSA Continental Tire SportsCar Challenge held their final practice session of the weekend.  However, the change in climatic conditions did not change the overall scope of things.

Once again, everyone went out as soon as the green flag flew to try to put their best laps on the board.  On the first timed lap, Team TGM‘s Guy Cosmo set a time that Compass360 Racing‘s Pierre Kleinubing beat about six seconds later.  Shortly afterwards, Bodymotion Racing‘s Trent Hindman topped that.  The next time around, Hindman beat his time again.  That lap, which was timed at 90.806 seconds (100.698 mph), was fastest enough to top the charts when the checkers fell once again.

Hindman, who will not be qualifying the No. 12 Porsche (his teammate, Cameron Cassels, will be), appears happy, but is realistic at the same time.

“I think [our Cayman] is pretty good,” Hindman said after the session.  “Between COTA and here, the Bodymotion guys worked very hard to make our Porsche perform the way its performing now.  They made a lot of changes.  Kudos to them for doing a helluva job and giving me a good race car.  We might have the outright speed, but we have to figure out how to make these tires last.”

Hindman ended up a little more than six-tenths of a second faster than Muehlner Motorsports America‘s Jeroen Bleekemolen in second.  Cosmo ended up third. This was the exact order of the top 3 in Grand Sport in Wednesday’s practice.  Multimatic Motorsports‘ Scott Maxwell was fourth fastest, while CJ Wilson Racing‘s Marc Miller was fifth.

For CJ Wilson Racing, it was not all good news during the session.  The team’s second entry, the No. 35 Porsche shared by Tyler McQuarrie and Till Bechtolsheimer, ran into big problems.  Bechtolsheimer appeared to cut a right rear tire while going up the hill exiting turn 1.  While traversing the uphill turn 2, Bechtolsheimer lost control and spun off-course, backing the Cayman GT4 into the concrete wall.  Bechtolsheimer was able to drive the car away from the scene, but eventually stopped on-course.  The team will repair the damage.

In Street Tuner, it was the same at the very front of the pack as Wednesday, but some different names were able to inject themselves into the conversation.  Porsche didn’t dominate the chart top-to-bottom like they did on Wednesday

Murillo Racing‘s Eric Foss once again topped the charts in the No. 56 Porsche Cayman.  Foss’ lap of 96.030 seconds (95.220 mph) was just .023 of a second faster than CRG-I Do Borrow‘s Owen Trinkler in the lone Nissan Altima.  Rebel Rock Racing‘s Robin Liddell was third quickest in the No. 8 Porsche Cayman, followed by points leader Stevan McAleer in the No. 25 ModSpace-sponsored Mazda MX-5 for Freedom Autosport.  Christian Szymczak was fifth quickest in the No. 34 Mazda MX-5 for ALARA Racing.

There was one red flag during the session.  That occurred just after Bechtolsheimer’s crash when Kieran O’Rourke spun Rebel Rock Racing’s No. 7 Porsche Cayman at turn 10 and got stuck in the gravel trap.  The Cayman was undamaged, but needed to be pulled out of the trap in order to get back to the pits.  Just after the red flag flew, Bechtolsheimer stopped the No. 35 so that he could be towed back in as well.

Despite turning in the fifth fastest time in ST, things weren’t all great for Szymczak.  During the session, the No. 34 developed an issue with the transmission.  The Mazda MX-5’s race with a stock transmission that any chap with a MX-5 would have.  A transmission change may be necessary prior to qualifying at 4:45 this afternoon.