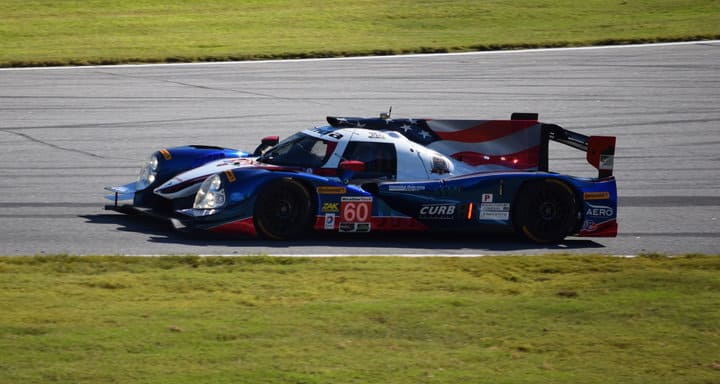 At Road Atlanta, there are three practice sessions for the IMSA WeatherTech SportsCar Championship scheduled for Thursday.  The third of those sessions is a night practice scheduled to start at 7:30 p.m.  The first two are during the day.  One team managed to top the charts in both daytime sessions.

That team was Michael Shank Racing with Curb-Agajanian.  For the Shank squad, this is a farewell to the Prototype class.  Next year, the team becomes a factory team for Acura’s new NSX GT3 that will run in the GT Daytona class.  Until then, the team is celebrating their 250th Prototype with the throwback scheme that they ran at Circuit of the Americas and some good pace.

Unlike in the two Continental Tire SportsCar Challenge practice sessions, the best times were not necessarily turned in the opening few minutes of the session.  There was actual progression.

In the Prototype class, the Daytona Prototypes set the early pace, buoyed by their ability to get tires up to temperature more quickly.  Wayne Taylor Racing‘s Ricky Taylor set the early pace only for Action Express Racing teammates Christian Fittipaldi and Dane Cameron to overtake the No. 10.

After mid-session driver changes, Mazda Motorsports‘ Jonathan Bomarito turned in a lap at 74.696 seconds to put the No. 55.  Shortly afterwards, Olivier Pla took Shank’s No. 60 to a lap of 74.157 seconds (123.306 mph), over a half-second faster than Bomarito.  That lap held up to top the charts in practice No. 1. Bomarito’s lap ended up good enough for second.  Cameron was third, followed by Fittipaldi and Joel Miller in Mazda Motorsports’ No. 70.

The second session saw the Daytona Prototypes again set the early pace.  This time, it was full-season competitor Oswaldo Negri, Jr. who topped the charts with a lap of 73.923 seconds (123.696 mph).  That lap was two-tenths of a second faster than Joel Miller in second.  Mazda teammate Tristan Nunez was third quickest in the No. 55, while Action Express teammates Cameron and Filipe Albuquerque were fourth and fifth.

Prototype Challenge was a battle between PR1/Mathiasen Motorsports and JDC/Miller MotorSports early on.  Tom Kimber-Smith has shown himself to be a very fast driver all season and Thursday was no exception.  The Dutchess County, N.Y. resident swapped quick times with Stephen Simpson during the first session.

Later on, Starworks Motorsport‘s Renger van der Zande showed that he was the man to beat, turning in a lap of 76.235 seconds (119.945 mph) in the No. 8 that spun very early in the session with David Heinemeier Hansson at the controls.  That lap held up to be the quickest PC lap of the session.  Four-tenths of a second behind was Simpson, followed by Kimber-Smith.  Richard Bradley was fourth quickest in the No. 88 from Starworks.  Teammate Mark Kvamme spun the No. 88 during the session, but did not hit anything.  Starworks’ third entry (No. 7) was fifth with Stefano Coletti at the controls.

The second session saw different drivers take turns at the top of the charts.  Kenton Koch, who co-drove the winning PC entry at Daytona from JDC/Miller MotorSports, led early on in the Performance Tech Motorsports No. 38.  José Gutierrez, now back in the No. 52 for PR1/Mathiasen Motorsports after racing the last couple of races for Starworks was right there as well.  However, the quickest driver in the session was Johnny Mowlem in the No. 20 for BAR1 Motorsports. Mowlem turned in a lap at 76.707 seconds (119.206 mph) to top the charts in the heat of the day.

Gutierrez was second quickest, nearly a quarter of a second back, followed by Koch.  Heinemeier Hansson was fourth quickest in Starworks’ No. 8, while Misha Goikhberg was fifth in the JDC/Miller MotorSports No. 85.

Kvamme’s adventurous day continued in the second session when he spun the No. 88 under braking for the turn 10a-b chicane complex.  This time, the spin resulted in Kvamme beaching the car and causing a red flag.  The car was not damaged, but the team lost practice time as a result.

GT Le Mans saw Corvette Racing show their muscle during the midday first practice session.  Tommy Milner was quick in the No. 4 Corvette C7.R, but it was Antonio Garcia in the No. 3 that was quickest with a lap of 78.840 seconds (115.982 mph).  That lap was four-tenths of a second quicker than the No. 62 Risi Competizione Ferrari 488 GTE driven by Giancarlo Fisichella.  BMW Team RLL‘s Dirk Werner was third quickest in the No. 25 BMW M6 GTLM while Ford Chip Ganassi Racing teammates Ryan Briscoe and Dirk Müller were fourth and fifth.

Porsche North America‘s Patrick Pilet had a brief power issue in his No. 911 Porsche 911 RSR, resulting in Pilet stopping on-track just past pit out.  Pilet was able to get the car restarted, but not before IMSA officials threw the red flag.

The second session saw most of the teams take turns putting down the fast laps.  Scuderia Corsa‘s part-time No. 68 was quick early with Alessandro Pier Guidi driving, then the Corvettes and Porsche North America’s Frédéric Makowiecki in the No. 912 took themselves to the top of the charts.  In the final five minutes of the sessions, Scuderia Corsa’s No. 68 was back on top of the charts to stay.  However, this time, it was Daniel Serra who was quickest with a lap of 78.354 seconds (116.701 mph).

Serra’s lap was six-hundredths of a second faster than Ford Chip Ganassi Racing’s Joey Hand in second.  Fisichella was third, followed by Richard Westbrook in the No. 67 and Jan Magnussen in the No. 3 Corvette.

GT Daytona saw the Porsche teams continue to benefit from the bigger air restrictor given to them prior to Lone Star Le Mans at Circuit of the Americas.  Park Place Motorsports‘ Jörg Bergmeister was fast out of the gate, but it was Alex Job Racing-Team Seattle‘s Alex Riberas that was fastest with a lap of 81.788 seconds (111.801 mph), turned in on his tenth lap of the session.

Riberas was half a tenth faster than Stevenson Motorsports‘ Lawson Aschenbach in second.  Bergmeister was third quickest, followed by Turner Motorsport‘s Jens Klingmann in the No. 96 BMW M6 GT3.  Alessandro Balzan in the GTD-leading Ferrari 488 GT3 for Scuderia Corsa was fifth quickest.  The entire class was separated by just over 1.1 seconds.

The second session saw the Porsche continue to show its pace.  It took all of seven minutes for Bergmeister to turn in the quickest lap of the weekend in GT Daytona.  Bergmeister’s lap of 81.340 seconds (112.417 mph) not only was the fastest lap of the session, but it is also the fastest lap time set by a GTD entry since the now-WeatherTech SportsCar Championship began in 2014.

Bergmeister was a tenth and a half faster than Riley Motorsports‘ Jeroen Bleekemolen in the lone Dodge Viper GT3-R in second.  Jeff Segal was third in Scuderia Corsa’s No. 63 Ferarri, while Aschenbach was fourth quickest.  Paolo Ruberti continued to show his pace from Circuit of the Americas, turning in the fifth fastest time in the No. 27 Dream Racing Lamborghini.