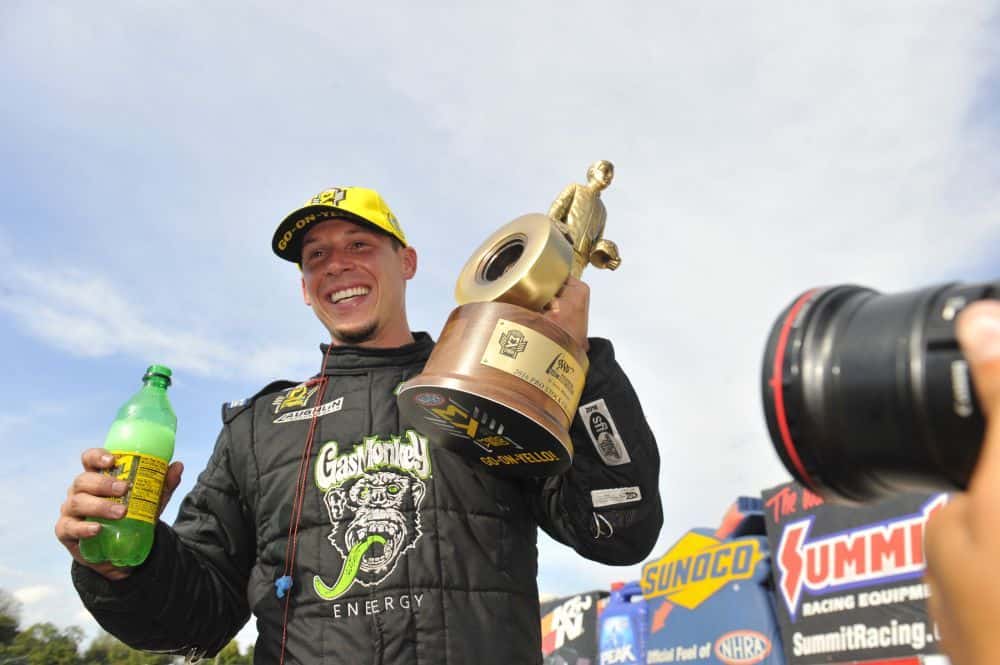 It’s been a bit of an odd year in Pro Stock. First there was the total and complete domination by the KB Racing organization through the first part of the year. Some others finally broke through, but among them were perhaps some surprises. Aaron Strong had to wait a little longer on it, but he claimed his first Wally by winning the weather-delayed Seattle final in Indianapolis.

He had a strange ride to that trophy, with seemingly lopsided matchups in all the earlier rounds, but Greg Anderson, Erica Enders, and Bo Butner all had issues and didn’t make clean passes. When he finally did get to go up against Vincent Nobile for the final round weeks later, Nobile redlighted. Strong had never even scored a round win in Pro Stock prior to Seattle. Sometimes it’s just your day.

This past weekend in St. Louis, a first-time winner was a lock to emerge as Bo Butner faced off against Alex Laughlin. Butner has been the bridesmaid so many times, enjoying that KB dominance early in the season to make it to four previous final rounds, but never managing to seal the deal. Laughlin has been doing what so many second year drivers do, getting better little by little until he finally made it to his first final.

You would think it would go to the driver with more experience making it to the trophy round, but as always, there is no rhyme or reason sometimes and Laughlin came away the winner while Butner came up short once again, his fifth runner-up result of 2016.

That’s the thing about drag racing, maybe more than any other form of motorsports. Having money and good equipment is important. It’s always important. But all the money in the world won’t stop the red light from coming on or make the tires stick on a slick track. On any given Sunday, if you pull up to that starting line, you have a chance and these drivers help prove that point.

Some Things Most People Don’t Know About Shawn: Was also a standout baseball player in high school but chose racing over college baseball scholarship offers; was a standout in Junior Dragster, winning a national championship in the 14-year-old category in 1997; excelled in sportsman racing also, winning the national championship in Super Comp in the Lucas Oil Drag Racing Series in 2007 and 2008.

Pro Stock’s most recent (and first time NHRA professional class) winner Alex Laughlin might be in his sophomore year in the class, but he has some ideas about what he’d like to change about NHRA if he could.

Word of the Week: Wally

As in “The Wally,” the trophy given to winners of NHRA drag racing events. Named for NHRA founder Wally Parks, you would think competitors would get tired of winning the same trophy over and over and over wouldn’t you? Nope. The one-foot tall brass man on the wooden base is still coveted, even by drivers who have dozens of them in their shops.