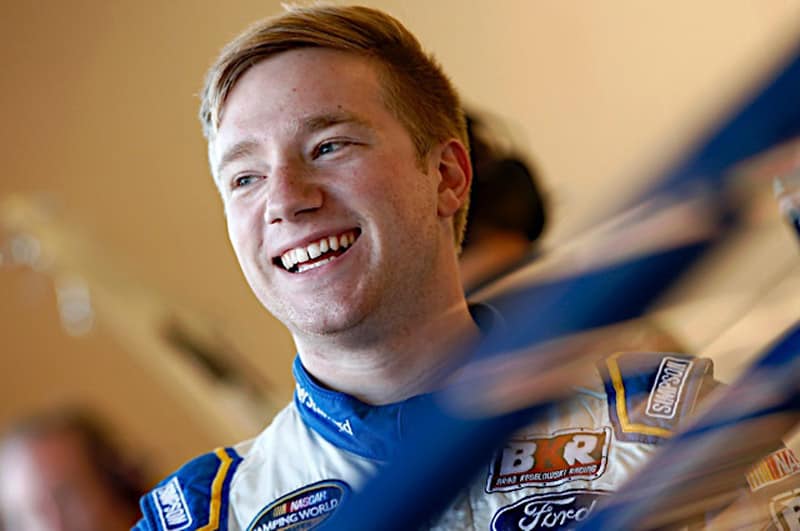 In a Nutshell: Just a couple weeks after missing the cutoff to join the inaugural Chase for the championship, Tyler Reddick beat teammate Daniel Hemric to the checkered flag by 1.404 seconds to score his first victory in the 2016 season. Reddick held off challenges from his teammate and third-place finisher Cole Custer in the closing laps to give Brad Keselowski Racing its first 1-2 finish. Ben Kennedy and William Byron rounded out the top 5.

Who Should Have Won: While drivers like Timothy Peters and Matt Crafton stood out during practice and qualifying, once the sun started to set over the mile-and-a-half Las Vegas, Tyler Reddick had the truck to beat for the remainder of the race. After starting 16th, the driver of the No. 29 Ford took the lead for the first time on lap 33. He went on to lead five times for a race-high 70 circuits en route to his third career victory.

Matt Crafton entered Saturday night’s race with high hopes for a solid finish, if not a chance at Victory Lane to secure his spot in the next round of the championship battle.

But it wasn’t meant to be for the No. 88 team. Shortly after the green flag flew, Crafton dropped like a rock, losing 10 spots in the first 30 laps. A truck that clearly wasn’t handling well plagued the two-time champion and had him worked up to the point where he was screaming – almost incoherently – over the team radio.

Despite the struggles, Crafton hung onto his truck and veteran crew chief Junior Joiner went to work on the No. 88 Toyota under the first caution, making large adjustments that would ultimately turn out to pay off. However, the damage wasn’t done hitting the team. A pit road violation buried Crafton at the tail end of the field on the ensuing restart.

When the checkered flag flew, Crafton had worked his way back inside the top 10 for a respectable eighth-place finish, though it was hardly the result he had expected out of what he thought was a strong truck heading into the race.

“The first round we were just terrible, terrible tight and we made quite a bit of adjustments on it and made it better,” Crafton said after the race. “We missed it out there and on pit road we lost quite a few spots there. We were definitely off all night.

“Track position was everything here. I don’t know what the deal was because this place usually widens out with different grooves. Usually it’s great here – I love this place – but we just couldn’t move around as much as we’re used to.”

In the end, Crafton and Joiner managed to limit the damage that could have been done in the championship battle by an ill-handling truck. And while he’s not locked into the next round mathematically, if Crafton can stay out of trouble and avoid the big one at Talladega, he’ll be in a good spot to move forward to the Round of 6 and keep his championship hopes alive.

As the field took the green flag, Bell’s No. 4 Toyota failed to go, causing several drivers to scatter, some into a four-wide situation. It looked much like the missed shift the rookie suffered at Texas Motor Speedway on lap 1 when he blew the engine.

But as it turned out, the damage wasn’t as bad as it could have been. Bell was able to continue but had lost third gear, which is what slowed him on the restart. Asking crew chief Jerry Baxter for advice on how to handle the third and final restart, the driver of the No. 4 was able to drop low on the track and work on building momentum before working to gain back the positions lost while not being able to shift properly.

Despite the problems he faced, Bell brought home a solid sixth-place finish. Sure, it wasn’t the kind of run to challenge for the win, but considering the trouble he had on restarts, he was lucky to finish where he did, though admittedly, it would have been much worse if there were several short runs to end the race.

“Our race was an uphill battle,” Bell said. “I felt like we had a really good Tundra, just had issues and lost third gear off on the second restart. Thankfully the race went green most of the time and we didn’t have too many restarts to deal with. That’s what hurt us to having a shot to win tonight.”

It was a case of bad to worse for John Hunter Nemechek. Following a fourth-place finish at New Hampshire last weekend, the driver of the No. 8 Chevrolet was penalized 10 championship points when his truck was found too low in post-race inspection. And if that wasn’t enough, Nemechek struggled throughout the night to a 16th-place finish, one lap down. He now sits 15 points below the Chase cutoff line heading into Talladega in a couple weeks.

Daniel Hemric recovered nicely from his struggles at New Hampshire Motor Speedway last weekend. Knowing that their best bet to remain in the championship battle was to win, Hemric and the No. 19 team arrived in Las Vegas ready to battle. And that’s exactly what happened when Hemric nearly won; he led 38 laps and finished second to teammate Tyler Reddick. Still 15 points behind the cutoff line, it would take a whole lot of luck for Hemric to point his way into the next round.

No. of Rookies in the Race: 10 (add Stewart Friesen and Timothy Viens)

Rookie of the Race: Cole Custer

Best of the Rest: Tyler Reddick used his trip to Victory Lane at Las Vegas Motor Speedway to take the top spot for the non-Chase drivers. He currently sits in a tie with Cole Custer but takes the tiebreaker with the win. Cameron Hayley, who was a non-factor all night in Las Vegas, now sits 29 markers behind in 11th.

WHAT A NIGHT! Team knocked off a perfect run. Had to dig hard early but our truck was just great all race! Thanks to everyone involved???

Solid solid day for our @Jacob_Companies team. Just needed a little more there at the end championship form for sure though. #TheChase

A solid night for our team @LVMotorSpeedway. Learned some good stuff to bring back here next time. Good @LibertyU @KBMteam Tundra

Struggled to find the balance of our truck all weekend. Have to go win at @TalladegaSuperS now. Can't thank Fire Alarm Services enough

Up Next: The Camping World Truck Series takes a couple weekends off before heading to Talladega Superspeedway for the third and final race in the Round of 8 on Saturday, Oct. 22. Coverage for the fred’s 250 powered by Coca-Cola begins at 1 p.m. ET on FOX Sports 1; the race can also be heard on your local MRN affiliate and SiriusXM NASCAR Channel 90.