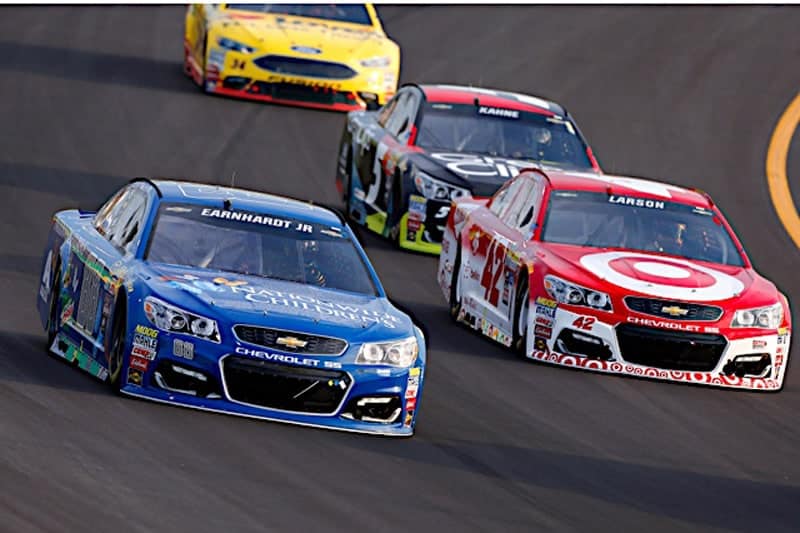 While the still-eligible field in the NASCAR Sprint Cup Series’ Chase for the Championship just lost a fourth of its entrants, one category of driver on the circuit just got a little bit bigger: the roster of potential spoilers.

Right, so, the usual spiel: NASCAR has attempted to reward winning a race even further by enacting a win-and-you’re-in format in the Chase that extends to the different elimination rounds in the Chase that kicked off in 2014. Win one of the three races in each round and you’re automatically on to the next round. Don’t win one and, well, you’re still eligible to make it past elimination, but you’ll need to accrue enough points in each race to do so.

But even before the elimination rounds were introduced, winning has still been of utmost importance ever since the playoff-style championship spectacle began in 2004. Consistency is important, of course, but it’s not like drivers were sputtering around the track in 10th place each week on their way to a title (well, most of the time). Even though the races that occurred during the Chase still featured anywhere between 40 and 43 drivers, depending on the season, the cream of the crop still generally rose to the top. And that makes sense; after all, in theory, the best of the best in a given year are already in the Chase anyway, right?

Well, almost. In 123 races (including 2016’s three so far) contested as part of the Chase since 2004, 20 have actually been won by someone who was, at that moment, statistically ineligible for the championship, or 16 percent in all. On average, it happens anywhere between once and twice a season (1.67 times, if you’re looking for an exact decimal).

Keep in mind that this number includes the relatively recent development that is the elimination rounds. In years past, once a driver made the Chase after race 26, he was in it until the end, even if he fell so far behind after a few races that, by Homestead-Miami Speedway, a title was completely out of the question and had been for a few weeks. That makes finding spoiler drivers much easier, because all one needs to do to find a Chase-ineligible winning driver is to see who didn’t make the playoffs after Richmond International Raceway.

Once 2014 rolls around and eliminations are in place, four of those 20 instances happen with drivers who made the Chase after Richmond but had fallen out of contention (see: had been eliminated) when they won their race. If you don’t think that should count, that’s reasonable — and in that case, it’s 16 out of 123 races that have been won by non-Chasers, or 13 percent.

The first to do it? Joe Nemechek, in what has stood as his final Cup win. He did the deed at Kansas Speedway on Oct. 10, 2004, as part of a season that saw him finish 19th in the overall point standings, well outside the Chase cutoff.

Speaking of: that cutoff. You might think that the number of spoilers would decrease as the Chase field expanded, and that’s not an incorrect assumption to make. Originally the field was just 10, then 12, moving along to its current 16-driver shortlist. The more drivers eligible, the less opportunities for a driver outside the cutoff  to play spoiler.

Weirdly enough, there was a slight uptick in 2011 and 2013, when Chase races were won by non-Chase drivers twice and three times, respectively. And the three-times-in-2013 number even occurred during a season when there were 13 drivers rather than 12.

But since 2014, when the roster was expanded again to 16, no driver that wasn’t in the Chase at the beginning (or the 27th race of the season), has won in the final 10 races. That extends to 2016, of course, with Martin Truex, Jr. and Kevin Harvick taking their spots in Victory Lane three races in.

So where does the number bump from 16 to 20? Enter Dale Earnhardt, Jr. and Jimmie Johnson, both of whom have been eliminated early on in the Chase not just in 2015 but also in 2014. Each year, they’ve ended up in Victory Lane after their Chase hopes ended, Earnhardt doing so at Martinsville Speedway in 2014 and Phoenix International Raceway in 2015, while Johnson triumphed at Texas Motor Speedway both years.

Other somewhat random stats of varying importance: Greg Biffle and Jamie McMurray are tied for the most wins during the Chase while not being part of it, each with three apiece. And perhaps unsurprisingly, the track with the most wins by a non-Chaser ends up being Talladega Superspeedway at five total; the next closest have three in all, a distinction shared by three different tracks (Kansas, Homestead, Phoenix).

The moral of all this? Historically, there’s a good chance at least one of the 10 races in this year’s Chase will feature a winner who strolls into Victory Lane while no longer eligible for the championship. Two problems there, of course: there are only seven races left at this point, and when a non-Chaser does win these days, it’s often someone who originally qualified but has since been eliminated.

Good news for Kyle Larson, I guess. He needs it, though, right?