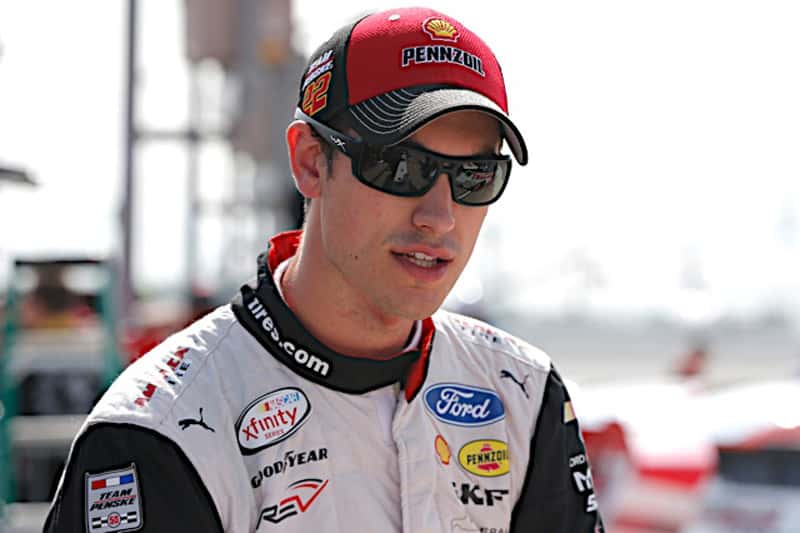 As the 12-driver XFINITY Series Chase turned into eight following Sunday’s Drive For The Cure 300 at Charlotte Motor Speedway, it was Joey Logano who took the trophy home.

Holding off dominant Kyle Larson in the closing laps, Logano grabbed his second win of 2016, second at Charlotte and 27th of his XFINITY career.

“What a fun night,” Logano said. “To come out here and race with nothing to lose, we had a good car. Maybe not the best car, but we had a good enough car to make something happen.”

Adding to the celebration, Logano achieved victory despite running the 500-mile Sprint Cup Series race shortly before he strapped into the No. 12 Team Penske Ford.

“My neck feels like from knocking down the wall [in the Cup race],” Logano said. “I tried to prepare myself the best I could for today knowing what I had ahead of me. If the car was that bad, I’d have a hard time!”

Larson, despite leading a race-high 165 of 200 laps, fell victim to Logano with 12 laps to go, losing the lead before falling to fourth.

Behind Logano, a plethora of Chase contenders battled for the final spots in the Round of 8.

“I didn’t know what shape we were in,” Jones said of his points situation. “Fortunately, we had lapped so many cars we were in a good spot no matter what. The quick caution got us back up out of traffic and let us race to the end.”

Koch, who is in Year No. 1 with Kaulig Racing, pulled off what Sadler called the “biggest story of the first round” by advancing to the Round of 8.

“After making the Chase in Chicago, I just felt a huge relief,” Koch said. “Going in, we had nothing to lose because there’s no expectations on me or the race team. But consistency isn’t what’s going to transfer you into the Final 4. I think we’re going to have to turn it up a notch.”

Behind the one’s what made it are the one’s who missed it. For Ryan Sieg, a top-10 finish wasn’t enough to dig himself into the top 8 in points, as he missed advancement in his No. 39 Chevrolet.

Joining Sieg are a few drivers who were expected to contend further into the championship hunt. Ty Dillon, finishing 11th, could not bounce back after a crash at Kentucky, missing advancement in his Richard Childress Racing Chevrolet. Under the same team roof, rookie Brandon Jones failed to make the top 8 in his No. 33 entry while Brennan Poole rounded out the bottom four after a battery issue cost him four laps on Sunday.