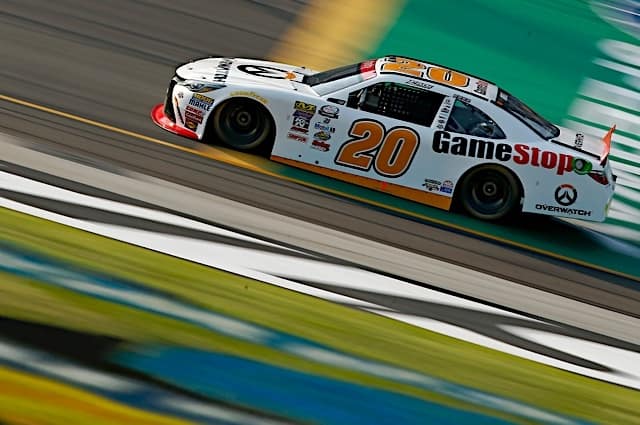 Erik Jones’ lackluster first round of the XFINITY Chase is finally over.  Fortunately for him, his championship hopes are not.  Jones went into the last race in the Round of 12 four points behind the Chase cutoff.  His fifth-place finish gave him more than enough points to make up the deficit.  As a result, he advanced to the Round of 8 with seven other NXS Chasers, all of whom are effectively tied for first in points.

Most fans considered Jones to be the championship favorite going into the Chase.  A popular preseason title pick, he piled up four wins during the regular season, more than any other XFINITY regular.  However, a crash in the opening race of the Chase at Kentucky Speedway raised concerns about whether Jones might be facing an early exit from the Chase.  The following week at Dover International Speedway, he was forced to make an unscheduled green flag pit stop to address a vibration.  Changing all four tires did not get rid of the issue, and worse yet, Jones was off-sequence with the rest of the leaders and had to pit again with eight laps left in the race for an extra splash of fuel.  The frustrating race put Jones in real danger of getting eliminated.

Jones’ most recent race at Charlotte Motor Speedway went well enough for the No. 20 team to advance, but not as well as it could have gone.  He spent most of the race running second to a ridiculously dominant Kyle Larson, who at one point had lapped everyone except the top 4.  Late in the race, Larson surrendered the lead to Jones when he made a pit stop under green.  Jones stayed on the track for as long as possible, trying to catch a caution or some other break that would give him an edge over Larson.  When Jones finally did make his pit stop, his crew lost control of tire that rolled into the infield, prompting NASCAR to throw the yellow flag that Jones had needed.

Unfortunately for Jones, the caution did not allow him to restart alongside Larson.  Since the tire had escaped from his pit box, he was hit with a penalty and had to restart at the end of the field.  Jones did not lose many positions due to the penalty because there were so few cars on the lead lap.  He also got a lot of his track position back after Dakoda Armstrong spun out two laps into the next green flag run, causing the last caution of the race.  But the penalty did prevent Jones, who had the second-best car in the race, from fighting for the win when Larson faltered in the closing laps.

On paper, there is no reason why Jones cannot still win the championship.  This week’s points reset means he is no longer in a hole to any of the other Chasers.  Jones’ finishes of 28th, 16th, and fifth have left him in the exact same place as teammate Daniel Suarez, who had finishes of second, first, and third during the Round of 12.  Does it really matter if Jones was not good in the first round if he was good enough to get by?  Maybe, but maybe not.

Jones was the big winner of the regular season, yet he spent most of those races hovering somewhere around fourth through seventh in points.  It appeared that he always had the speed to surpass drivers like Suarez, Elliott Sadler, and Justin Allgaier.  Inconsistency, however, kept Jones from reaching the top of the ladder, even though he always seemed to be in a good position to climb it.  Of course, that inconsistency did not matter much anyway since he had more than enough wins to guarantee himself a place in the Chase.  The only races that really mattered for the No. 20 team were in the Chase, and the speed advantage that Joe Gibbs Racing has enjoyed all season suggested that Jones could perform at a higher level when he really needed to do so.

The problem is that the initial assumption has not become reality.  Jones and the No. 20 team have not been able to flip the metaphorical switch during the Chase to suddenly fix their consistency issues.  After taking all three races in the Round of 12 just to crack the top 8 in points, Jones can no longer be confident that he will be able to produce good finishes when he really needs them.  Even Charlotte, though it ended with a top 5, did not go off without a hitch thanks to the uncontrolled tire penalty.

Perhaps it is time to stop assuming that Jones’ path to the championship will be a cakewalk.  Suarez and Sadler have been more consistent from the outset of the season, and both drivers won a race in the first round.  Allgaier is still without a win, but the No. 7 team showed great resiliency in the Round of 12, especially at Kentucky.  Jones probably still has the most potential among XFINITY regulars to win any given race, but wins will be hard to come by in the Round of 8.  All three races are part of companion weekends with the Sprint Cup Series, and the NXS events are sure to attract participation from Cup drivers.

Jones is no longer on the brink of elimination, and that is undoubtedly a good thing.  The No. 20 team has a chance to regroup and find a way to stop the mistakes that have plagued its Chase so far.  Otherwise, Jones might finally have a race that puts the 2016 XFINITY championship out of his reach for good.