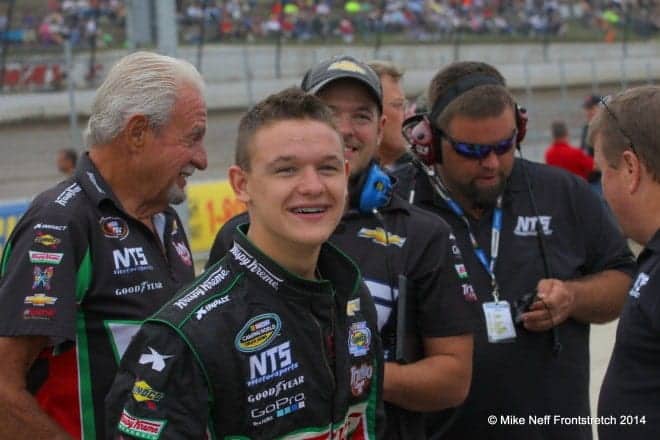 The Motorsports Group announced Thursday (Oct. 20) it has signed NASCAR Next alumnus Gray Gaulding to compete in three of the final five Sprint Cup races in 2016, starting at Martinsville Speedway next weekend.

“It’s exciting bringing a new partner into the series and to be making my NASCAR Sprint Cup Series debut at a track like Martinsville (Speedway) where we’ve had a really good history in the past is honestly unfathomable” Gaulding said in a team press release. “I’m excited to partner with Feed the Children and use NASCAR as a platform to deliver our message and work to create a world where no child goes to bed hungry.”

I'm excited to share the news of our multi race partnership with @feedthechildren in the #NASCAR Sprint Cup series https://t.co/QhHZNUUUE2 pic.twitter.com/aGGDoU2dJb

Gaulding’s best career finish in a top division of NASCAR was a fourth-place effort at Canadian Tire Motorsport Park in 2014, driving the No. 20 truck in the Camping World Truck Series. The Virginia native has four career starts at his home track (Martinsville), with a best finish of 14th in 2014.

In the past Gaulding has also competed in two full-time seasons in the NASCAR K&N Pro Series East, with a best championship finish of third in 2014, resulting in nine top-10 finishes. His solo victory in NASCAR was in the K&N Pro Series West in 2013 at Phoenix International Raceway, leading only the last lap.

Phoenix and Homestead-Miami Speedway are the other two races in which Gaulding will drive for the Motorsports Group. Josh Wise, regularly the driver of the No. 30 Chevrolet, could not confirm to Frontstretch if he would be back in the machine at Texas Motor Speedway, the only remaining track on the circuit for which Gaulding was not announced, with the exception of Talladega Superspeedway, because the team opted out of competing for a position in the event.

In 27 starts for TMG this season, Wise has a best finish of 24th at Kentucky Speedway.

Sheesh, really? All the best for Gray, but imo, the kid has no business what-so-ever in a Cup race.

Kids are put in cars that have no chance of doing well, don’t meet expectations (to be expected) and disappear.

Reading this story, all I can think of is David Ragan running at Martinsville in one of his first Cup races and spinning out about 10 times.
Not sure what’s worse, this or the Reed kid attempting to make his debut at Talladega.

I remember being at the track and getting scared everytime Denny had to pass him. They should have parked him.