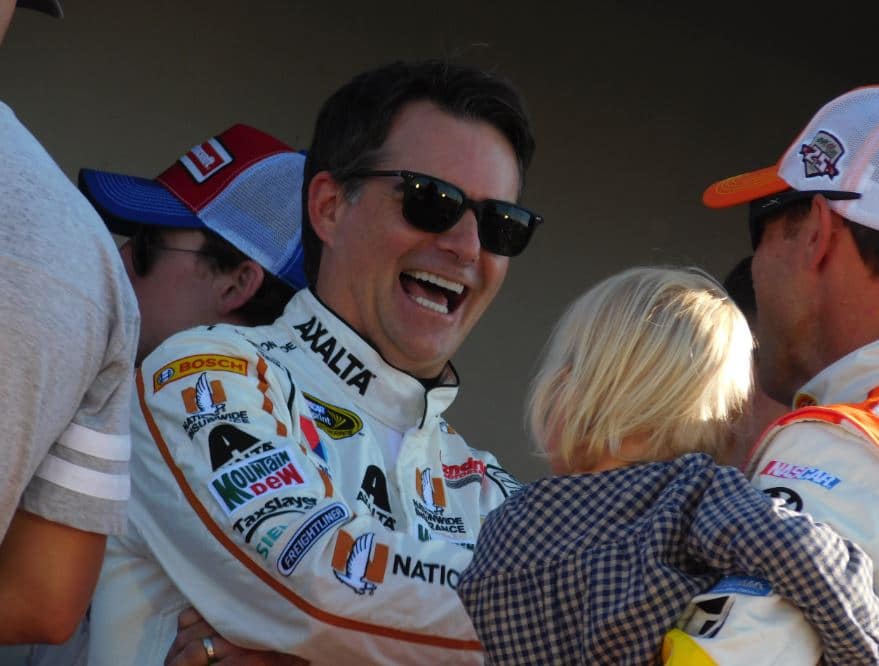 Will Jeff Gordon Win His Last Race in No. 88?

The deal will end with an eighth start in Sunday’s Goody’s Fast Relief 500 at Martinsville Speedway, raising the question of expected performance from the 45-year-old.

Looking at his track history, you should line him up for a 94th win this weekend. The Paper Clip has been to home to nine wins from Gordon, along with 29 top 5s and 37 top 10s in 46 starts – in 80 percent of his starts he’s been 10th or better.

Specifically, the fall race here has blossomed success from the four-time champion, winning two of the last three and finishing second in the 2014 event.

With great results on the course, the talk in the No. 88 garage stall this weekend will be Gordon’s recent performance in 2016. In seven starts, Gordon has only one top 10 and seven laps led. Alex Bowman, with the same number of races, has two top 10s along with a better average start, for what it’s worth.

Though his numbers haven’t been Gordon-esque, consistency has been his strong suit, finishing lower than 16th only once.

So, we return to the place of his last win. Except this time, it will be his last (planned) race in the Cup ranks. There’s a strong chance of seeing another round of magic from Gordon, as it just seems to be a perfect storm for another grandfather clock trophy.

What — If Any — Impact Will Non-Chasers Have on the Championship?

A couple of the top contenders were on their way to the Round of 8. Solid days, decent point positions and stellar race teams behind them.

Martin Truex, Jr. has gotten the lion’s share of attention so far in 2016 – and for the right reasons. The Furniture Row Racing team placed itself as one of, if not the best choice to grab the Sprint Cup championship this year. With four wins and more than 1,000 laps out front, the Chase saw the team simply at their its best.

Talladega Superspeedway, however, was the end of the road, as the No. 78 blew a motor on lap 41, ending Truex’s race and killing his Chase advancement.

After being instantly removed from the title hunt, how much of an effect will Truex have on the remaining Chase drivers? Well, I don’t expect things to change much. Truex is still going to be faster than hell and will surely contend for another win or two before the year is out.

However, Toyota will have four Joe Gibbs Racing affiliates in the Chase hunt. Those are four drivers who will likely find a break here and there from Truex, especially is they’re in the grind trying to make it the Homestead.

Either way, Truex can make a heavy impact on this championship by going out and stealing wins from Chasers. Though he’s never won at any of the remaining tracks, his 1.5-mile program has been scary fast, and there are two more of those bad boys to go.

Speaking of bad, Brad Keselowski also went ka-blammo in Talladega, ending his steady Chase after back-to-back 38ths in the Round of 12.

Thought Keselowski hasn’t won since Kentucky Speedway in July, he started the Chase with three straight top 5s and was dominating at ‘Dega until his engine failure.

Those who say the Chase is a little less exciting with Keselowski not in it may be right, but don’t think he wont be showing up to race. He has a teammate in Joey Logano still alive in the hunt, and the No. 2 Team Penske entry will try to grab win No. 5 to become the winningest driver of 2016.

Any time we roll into Martinsville, you get a sense we are going back in time. Back where it all started and when it was simple and fun.

That’s the way Chase Elliott may feel on Saturday afternoon when he makes his return to the Camping World Truck Series in the Texas Roadhouse 200.

Making his first Truck start since Phoenix International Raceway in 2013 this weekend, Elliott started his national NASCAR scene right here at Martinsville when he made his Truck debut in the spring of 2013. Finishing sixth that day, Elliott later rallied four straight top 5s leading up to his one and only win at Canadian Tire Motorsport Park in September.

Can he return to Victory Lane again? Well, he sure has been through a lot since his last time in one of these powerful pickups. Winning the championship in his first XFINITY Series season in 2014, Elliott jumped to part-time Sprint Cup action in 2015, making his first start at Martinsville before filling Gordon’s No. 24 in 2016.

With surely a drastically different outlook on a weekend like this – especially being out of Chase contention following an elimination at Talladega – Elliott could easily bring his No. 71 Chevrolet to the front.

Unlike a Kyle Busch or Denny Hamlin, Elliott is a newbie to this Cup game and should be welcomed warmly back to the Truck Series, which will see another wave of first-timers hit the track this weekend – per usual in Martinsville.

It had been a few months, but Lewis Hamilton finally took the top step of the podium again in Formula 1.

Leading 53 of 56 laps in last week’s United States Grand Prix from Circuit of the Americas, the No. 44 Mercedes W07 driver broke a five-race winless run by earning career win No. 50.

More important is how much it affected the championship picture. With points leader Nico Rosberg finishing second over Daniel Ricciardo, it was only a gain of seven points, which lowers the margin to 26.

With a full-race gap over the three-time champ, Rosberg should be relatively sound as he approaches his first championship. But not by much, because, with only three races left, Hamilton can easily get all three race wins – you know, because it’s usually a two-man race unless catastrophe strikes the Silver Arrows.

With three wins to end the year, Rosberg would have to go 2-3-3 to hand the title to Hamilton. In other words, Hamilton needs help from Red Bull or Ferrari if Rosberg doesn’t have mechanical woes. For the first time in the Mercedes Era, it’s Hamilton on the chase.

For this weekend’s Mexico Grand Prix, it’s a racetrack in only its second year on the F1 calendar. Colorful fans and unique corners will greet the sport at a timely point in the season. Can Hamilton strike luck? Or will Rosberg finish the season how he started it?

Well if last year is any indication the Gibbs Quadruplets will mash and mangle anybody and say “gee” fill_in_the_blank. Of course it will be a lie, but objective achieved. One does not need to be out of “The Chase”…oh wait..if memory serves…..