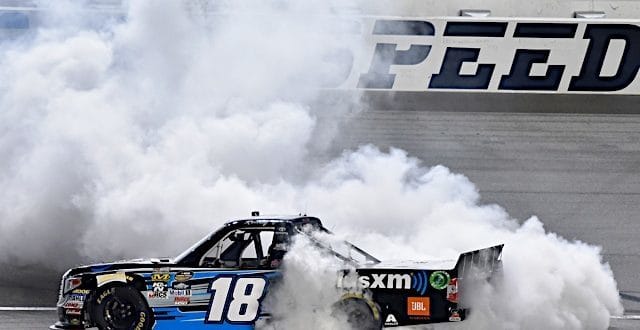 On Wednesday morning, NASCAR announced it would limit the participation of Sprint Cup drivers in the lower two divisions, with a maximum of 10 races allowed in the XFINITY Series and seven races in the Truck Series. Drivers who have raced in the Cup Series for five full-time seasons or more will be restricted to these guidelines. However, for drivers like Ryan Blaney and Kyle Larson, they can continue moonlighting in the XFINITY Series for a little longer.

The change shows NASCAR is listening to its fans, who have been screaming for a change. Essentially, the “Kyle Busch rule” as it should be called, will only effect a handful of drivers, specifically Busch.

Notorious for dipping down in the XFINITY Series and Truck Series, Busch has a record 85 wins in the XFINITY Series, 80 of which have come since he became a full-time Sprint Cup driver in 2005. This season, he has dominated the XFINITY Series races he has participated in, winning nine of 16 contests, leading 1,862 laps. At this rate, he has a solid shot at leading over 2,000 laps in a season for the fourth time in his XFINITY Series career (2009, 2010 and 2013).

Evidently, this change will certainly have an impact on how the business of the lower-tier divisions will be run. Sponsors will be requesting different packages, with an emphasis on young drivers going to teams owned by Sprint Cup owners more so than ever before.

As the XFINITY Series and Truck Series teams adjust to this massive shake-up, the Sprint Cup Series continues to deal with the effects of the charter system. With the smaller organizations either folding, combining efforts, selling/leasing charters or just trying to figure out what will happen in 2017, one major team could have a shake-up coming. If this happens, a middle-tier crew might get a boost from a Sprint Cup veteran.

Q: What impact will NASCAR’s change of limiting Cup drivers in the lower tiers have on younger drivers, such as Matt Tifft? – Brendan R., Richmond.

A: The potential to shake things up certainly exists now with this move. However, team owners and sponsors can’t say they are shocked by this move.

Let’s face it, this has been in the works for several years. Each year, whenever a guy like Busch dominates an XFINITY Series or Truck Series race, the topic of what to do with Cup drivers in the lower divisions always becomes a hefty debate, full of intense discussions on each side of the argument.

Now that NASCAR has finally made this move — and rightfully so — teams and sponsors should be thankful NASCAR didn’t lay down a stricter rule. If NASCAR executives recognized the real problem — Cup drivers racing for their Cup teams in the lower tiers — Wednesday’s announcement could have been detrimental for partnerships like Team Penske and Discount Tire. Who knows what would have happened if NASCAR said, hey, you guys can have an XFINITY Series program, but no more having Brad Keselowski and Joey Logano behind the wheel for the majority of the season.

A combination of Cup drivers will only be allowed to compete for a team in 17 races in the XFINITY Series and 10 in the Truck Series since they won’t be allowed to run the Chase races in either division, along with the Dash 4 Cash contests at the NXS level.

What does this mean? Let’s use Team Penske as the obvious example. The No. 22 team will have Keselowski and Logano in the car for 17 races next year, with Ryan Blaney likely taking the helm for the majority of the remaining contests since this rule does not apply to him because he has less than five years of experience as a full-time Sprint Cup driver.

But the biggest question is: Does Discount Tire stay for the races the team’s two Cup stars won’t be competing in, or will it shift its marketing to focus on activation with those two drivers during the weeks they are racing? Through 30 races in 2016, Logano and Keselowski have run 13 races each, with Blaney and Alex Tagliani (one race). While Blaney ran a second car for the team in a handful of contests, he has limited time in the primary No. 22 car this year.

Then, of course, is the question of what happens to Joe Gibbs Racing with all of this. The team continues to excel in the XFINITY Series, with rookie Erik Jones and sophomore Daniel Suarez each competing for a championship. However, Jones moves to Furniture Row Racing in the Cup Series next year, leaving a seat vacant. While the team will not say what its official plans are for 2017, with this move, it will likely mean one car split between its Cup drivers and a guy like Matt Tifft, along with one for Suarez.

But then there’s the question of the No. 20 team? Why continue that program unless another fully-funded driver comes into the fold?

Well, because of this new rule, that could happen, except it would be in the car that Busch usually drives. Figure GameStop and Hisense stay with JGR in the XFINITY Series, that means it will have some races for Jones (who can race as much as he wants for the next five years in the XFINITY Series), along with Denny Hamlin and possibly Matt Kenseth.

With Busch capped at 10 races, it means the team will basically continue what it’s done this year: Filling the voids in the schedule with Hamlin and Tifft. However, it appears as if Jones could take over a chunk of the schedule if one of JGR’s developmental drivers doesn’t do so. Another possibility is Tifft gathers enough sponsorship and ends up replacing Jones in the No. 20 car, which means JGR will need to find someone else to run the No. 18 car in the races that the Cup guys are banned to compete in.

This could be a big break for drivers with limited sponsorship, like say a Gray Gaulding, who has funding for only a handful of races and could go from middle-level equipment to a top ride now. Additionally, it’s very important for someone like Michael Annett, who has sponsorship but might dip down to the XFINITY Series and needs some time to re-adjust to the sport’s version of Triple-A.

A: Greg Biffle’s time at Roush Fenway Racing appears to be limited. The “Biff” has been at Roush since 1998, and it is time for a change.

The sport’s oldest driver, Biffle, 46, is rumored to be heading to JTG Daugherty Racing as a teammate to AJ Allmendinger. If the rumor is true, the team will acquire a charter to make sure he is locked into each race, something potential sponsors will want to see.

The rumor specifically heated up after Kellogg’s announced it was leaving not only Watkins Glen International, but Roush Fenway Racing as well. Cheez-It has been featured on Biffle’s car, along with Darrell Wallace, Jr. in the XFINITY Series, since last year. However, with Biffle sitting a career-worst 24th in the standings with four races left, a sponsor leaving the organization could be the difference-maker.

This year, Biffle has one top 5 and three top 10s, the worst he’s ever done in each category. Going winless since June 2013 at Michigan International Speedway, his results have dwindled.

Obviously, Roush is not the same as it used to be. Team majority owner Jack Roush is getting older, and his methods of controlling the team don’t work like they used to.

If Biffle departs, the last driver of the team’s early-2000s line-up will no longer be with the team, officially beginning a new generation for an organization looking for a pick-me-up. One could compare him to Bobby Labonte, who ended his full-time driving career while competing for JTG Daugherty Racing (2011-2013). Both drivers struggled before heading out of their situations, with Labonte’s dating as far back as 2004, when he was still driving the No. 18 car for JGR.

While it looks increasingly likely that Biffle is on his way out, it could mean rookie Chris Buescher, who made the Chase this year for Front Row Motorsports, will replace him. That is in no way official, but it would be the obvious choice given his success in underfunded equipment this year, frequently competing with the Roush cars even before he won at Pocono Raceway in July.

If Buescher goes to Roush, it leaves an opening at Front Row, which would then have several options of who to put in its second car. While David Gilliland is an option, he seems satisfied with running part-time now, and is enjoying the ownership role he has taken on with development drivers, including his son, 2016 K&N Pro Series West champion Todd Gilliland.

Another option for Front Row would be getting a driver with a brand, like Jeffrey Earnhardt or even Cole Whitt. Whitt drove for the team before it went with a fresh lineup for 2016. Struggling with Premium Motorsports, he will certainly be looking for a new ride come 2017.

Joseph started with Fronstretch in Aug. 2014 and worked his way up to become an editor in less than a year. A native of Whitestone, New York, Joseph writes for NASCAR Pole Position magazine as a weekly contributor, along with being a former intern at Newsday and the Times Beacon Record Newspapers, each on Long Island. With a focus on NASCAR, he runs our social media pages and writes the NASCAR Mailbox column, along with other features for the site.
Previous Nitro Shots: The NHRA’s Youth Movement
Next Eyes on XFINITY: A Return to Martinsville Could Put Lights to Use