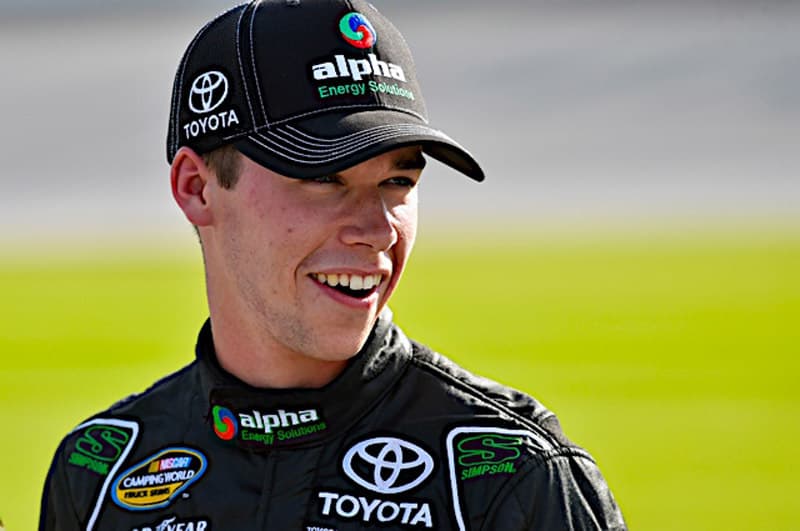 Austin Wayne Self
No. 22 AM Racing Toyota

The 2014 ARCA Rookie of the Year entered the Truck Series full-time to pilot his family-owned truck and has spent much of the year running toward the middle of the pack. After failing to qualify at Martinsville Speedway for the third race of the season, a deal with Martins Motorsports put Self behind the wheel of the No. 44 in place of Tommy Joe Martins, and despite dropping to the back of the field for a driver change, he posted a 15th-place result.

Most of the year has been ho-hum for the No. 22 team that lacks in the speed that larger organizations bring to the table, however there was a bright spot for Self in the form of a ninth-place result at Eldora. As it turns out, the dirt can turn into as much of an equalizer as plate racing can be.

For Self, it’s almost a given that he will remain with his family-owned team next season, but perhaps what’s more important is that he’s stepping aside this weekend at Martinsville Speedway for the greater good of the organization, with Justin Fontaine taking over. AM Racing wraps up its first Truck Series season has plans to expand to multiple teams next season, and it appears Fontaine, who will run the No. 22 this weekend, is likely on the radar to join the organization next year.

Grant Enfinger was announced as driver of a third truck for GMS Racing before the season began, which implied he would be racing the entire schedule. But after just two races, he was replaced in the No. 33 Chevrolet by Kaz Grala at Martinsville, Ben Kennedy at Kansas and Grala again at Dover. The truck turned out to be Kennedy’s full-time ride after leaving Red Horse Racing early in the year, and Enfinger has made the following starts in the No. 24.

Aside from a 20th-place finish at Daytona in the season opener after starting on the pole, Enfinger’s worst finish came in the form of a 12th-place result at Kentucky, though he has top 10s in his other starts. That, of course, was capped off by the big win at Talladega last weekend where Enfinger took the final green flag almost completely surrounded by teammates. Based on the performance he’s shown in the limited number of starts he’s made, the 31-year-old would be a wise investment for the organization on a full-time basis.

Ben Rhodes joined the Camping World Truck Series in 2014, driving four races for the now-defunct Turner Scott Motorsports and spent the 2015 season making 10 starts in the XFINITY Series. Joining ThorSport as one of two rookies fielded by the organization this season, Rhodes had high hopes for the team that’s been one of the strongest in the series in the last few years. Back-to-back top-10 finishes to open the season made way for four straight results outside the top 15.

Perhaps one of Rhodes’ most memorable moments this year came when he made a banzai move for the lead on Johnny Sauter and William Byron during an overtime finish at Kansas Speedway in May. Neither driver won the race or even finished inside the top 10, and the rookie walked away with a peeved veteran in Sauter who likely won’t give him the room he would normally give others on the track.

In recent weeks, Rhodes has torn up a decent amount of equipment, crashing out of three of the last five events, however in the times when he’s been able to get the most out of his truck without divebombing others on track, definite potential has shone through. The question is whether a team is willing to risk its equipment while trying to build up a rookie.

Rico Abreu made his Truck Series debut last season with NTS Motorsports at Phoenix International Raceway but managed to run only 44 laps before being caught up in a crash. The following week, he posted a 13th-place finish ahead of his full-time rookie run this year. Though he got caught up in a wreck late in the season opener at Daytona, Abreu has spent much of the season working his way through the standings to where he’s hovered inside the top 15 for many of the recent weeks.

There have been some flashes of brilliance for Abreu this season, including a thrilling charge for a potential win at Texas in June before he overdrove and bounced off of the wall, a move that negated what would have easily been a top-5 finish. But for the most part, rookie gremlins have hit the driver of the No. 98 Toyota, which has somehow managed to find its way into other drivers’ accidents several times this season. He has a best finish of third at Eldora where many expected him to excel, and he finished fourth at Talladega last weekend.

The year hasn’t been without its hardships as the whole organization had to work out of impromptu shops after a fire at their main building earlier in the season. Without that distraction, the growing pains could potentially have been minimized. Like many of the teams in this series, next year’s plans are usually last minute due to sponsorship reasons, however it wouldn’t be surprising to see ThorSport work to keep Abreu in the ride. But the expectation would be that he would continue to improve with more experience at each of the tracks the series visits.