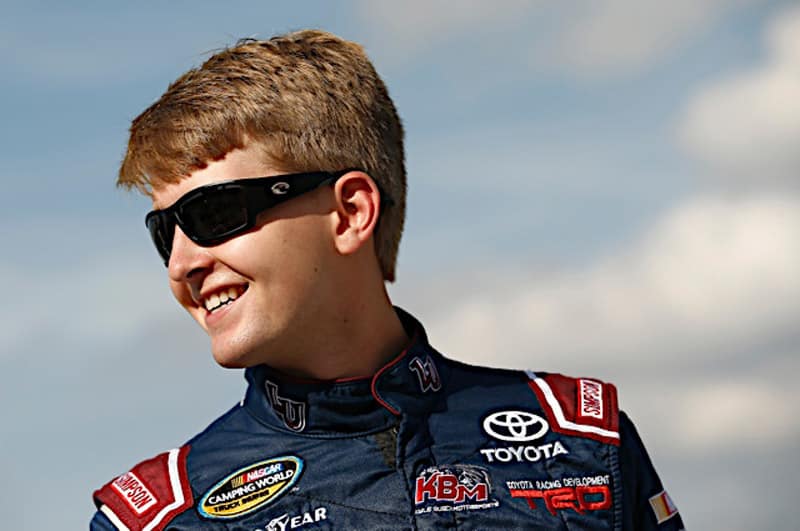 That’s probably not a number or position on the mind of William Byron — or, really, anyone else — in 2016. Instead, it’s been more like the number one. Or first. You get the idea.

Because that’s where Byron, a rookie for Kyle Busch Motorsports in the NASCAR Camping World Truck Series, has been finishing quite a bit in 2016. Entering Texas Motor Speedway this weekend, with just three races to go in the season, Byron has driven his No. 9 to Victory Lane in six of the 20 races run. He also stands as the only driver with at least 10 top 5s.

In the pre-2016 points format, Byron would be looking on his way to a series title; setting the standings as they would have been accrued in 2015, he’d be 23 points ahead of second-place Johnny Sauter at this point. Instead, he’s fourth, 11 points back, looking to try to at least make it to the final round of the inaugural series Chase to win a championship for which he’s been considered the favorite since he began rattling off wins early in the season.

Because if Byron ends up prevailing and scoring the championship in his rookie season, he’ll have one of the biggest leaps from the previous season’s point standings in series history.

In 2015, Byron drove just one race, nearly one year ago at Phoenix International Raceway. It was certainly no indicator of things to come for the then-17-year-old, finishing 31st after crashing out on lap 6.

Since he declared for Truck Series points, Byron received 13 markers, good enough for a tie for 77th place in the overall standings with Terry Jones, who crashed out in his only start at Talladega Superspeedway. The duo bear only Stew Hayward, a 32nd-place finisher at Eldora Speedway.

If Byron ends up with the title, he’ll have jumped 76 positions year over year, a feat only bested by one other driver — and that was a different era entirely.

Think about it this way: in 2016, drivers only receive points for the series for which they declared at or near the beginning of the season. That’s why when Kyle Busch drives in the XFINITY or Truck series, he doesn’t gain points in those series toward the championship (though he used to; the system was enacted in 2011 to deter Cup drivers from scoring championships in lower series). So when Byron got those 13 points, he was only competing in the overall standings with anyone else who declared for 2015, not counting the 29 others who raced but didn’t receive points, meaning that if this were a pre-2011 points system, his final position might have been more like 105th rather than 77th.

So that’s the reason why he’d be second to Mike Bliss, who won the Truck Series championship in 2002. In 2001, Bliss was all the way down in 86th in the final standings after running just one race all year, finishing ninth in the No. 16 at South Boston Speedway. That was a weird year for Bliss, who couldn’t secure a full-time ride in any of the top three NASCAR series and mostly bounced around running one-offs and failing to qualify for others. But once Bliss returned to the series in 2002, he was the champion by season’s end, vaulting 85 spots in the process.

Again, back then, there were zero limitations points-wise, so in the final standings in 2001, Bliss was beaten out by full-time drivers in upper series such as Ken Schrader, Bobby Hamilton, Greg Biffle, Stacy Compton and Kurt Busch. Had this system been implemented back then, Bliss would certainly have risen a few more positions overall, perhaps even higher than 77th.

This is important to note because generally speaking, the Truck Series champions come from somewhere in the top 10 in points the previous season. In fact, only twice has the champion been outside of the top 10 the previous year — Bliss in 2002 and then Erik Jones last year. Jones finished 18th in 2014 after running 12 of 22 events due to not yet being 18 years old and thus able to compete on all tracks in the series — despite winning three events that year. He followed it up with a title in 2015 for KBM in the No. 4 Toyota now driven by Christopher Bell.

Speaking of Bell: if Byron does not win the championship (and that’s a very real possibility; that’s the Chase for you), no other driver currently eligible for the title would have a jump from the previous year quite like Byron. The biggest would be Bell, who ended up 27th in the 2015 standings after starting seven races that year, with one win coming at Eldora. The other four — Matt Crafton, Ben Kennedy, Sauter and Timothy Peters — tend toward the usual statistic, with all four having finished in the top 10 in points last year.

So really, there are two drivers who could shake the usual trend, and they both drive for the same team. It could certainly be indicative of the 16- and 17-year-old rule, with drivers taking advantage of NASCAR’s relaxed Truck Series age restrictions in order to get some experience before going full-time.

But either way, if Byron or Bell wins this title, it’ll mark the second straight year where a driver in no way, shape or form in contention for the previous year’s championship comes out on top the next year.

And if that’s the identity the series is adopting, that’s not a bad thing in the slightest — and drivers like Kaz Grala and Harrison Burton should definitely take note.