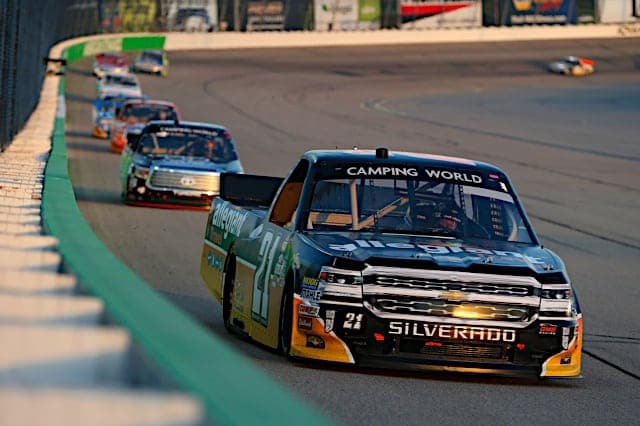 After winning at Daytona International Speedway in Feburary, Johnny Sauter went 19 races without winning a race. But two races into the Round of 6 in the Camping World Truck Series Chase, Sauter has gone back to back in Victory Lane.

Sauter’s win at Texas didn’t come easy, however. He had to pass Daniel Hemric and Matt Crafton in the final five laps to go from third to first. Sauter got around Crafton with two to go for the final lead change of the night.

Spencer Gallagher started on the pole and led 88 laps, but the Las Vegas native was denied victory by his pit crew, which lost him multiple spots on pit road all night. He finished seventh.

As far as the rest of the drivers in the Chase, KBM drivers William Byron and Christopher Bell ended the night sixth and 11th, respectively. Ben Kennedy finished 13th and Timothy Peters ended up 14th.

There were seven lead changes between four leaders.

With one race remaining before the Chase field goes from six to four for Homestead-Miami Speedway, only Sauter is locked into one of those spots. The other three positions in the final four are a little more questionable, with Byron in by five points and Bell in by four points. Crafton is only ahead of Peters by one point while Kennedy is out by a distant 13 points.