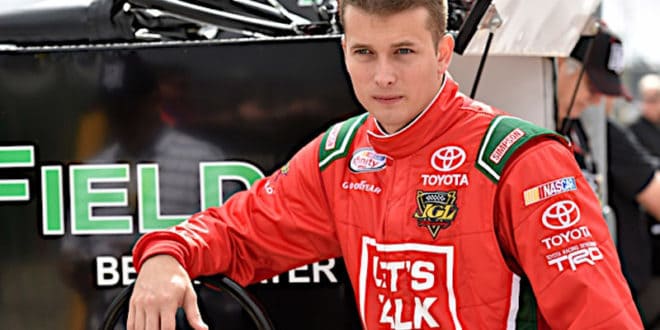 Larson led the first session with a fast lap at 185.599 mph, just one-tenth of a second faster than Daniel Suarez. Matt Tifft was second quickest, followed by Erik Jones. Kevin Harvick, who is behind the wheel of the No. 88 Chevrolet for JR Motorsports this weekend, rounded out the top 5.

Meanwhile, Armstrong sat atop the leaderboard for the entire 85 minute second session with a 184.244 mph lap, edging Larson by 0.079 seconds. Brandon Jones, Tifft and Suarez rounded out the top 5. Suarez and Brendan Gaughan were the only two Chasers to make the top 10, though Erik Jones posted the fifth-quickest 10 lap average.

Early in the first session, Blake Koch, who currently sits third in the championship standings, failed to complete a lap before he slapped the wall hard due to a suspected suspension part failure, forcing the No. 11 team to pull out a backup car that was previously run at Chicagoland Speedway earlier this year.

“Something broke on the car, and it went straight to the wall,” Koch explained while his team pulled out the backup car. “They’ve already got the backup out; this backup we just raced not too long ago. They had three weeks off to set it up, so I’m confident it will still be a good weekend for us.”

To add insult to injury, as Koch and the No. 11 team prepared to hit the track for the second session, a problem with the clutch cost even more time. Though the initial thought was that the car needed a transmission change, it wasn’t and repairs were completed in enough time for Koch to run 25 laps. He ended up 17th quickest.

With less than 10 minutes remaining in the final practice session, the caution flew for light sprinkles, though the track went back to green for the last six minutes before the end.

Qualifying for Saturday afternoon’s race will be held at 10:45 a.m. Saturday morning. The O’Reilly Auto Parts Challenge runs at 2:00 p.m. with coverage on NBC.

Content Director Beth heads up management of our 30-person staff, acting as Tom’s main assistant with technology and personnel while working as Frontstretch’s Truck Series expert. The author of Truckin’ Thursdays and the coordinator of the site’s pre and post-race coverage, she also runs a periodic charity column that spotlights when NASCAR gives back. A childhood transplant to Texas, Beth is a 15-year writing veteran who has contributed content to BRANDT and Athlon Sports, among other outlets.
@NASCARBeth
Previous Spencer Gallagher Snags Pole for Striping Technology 350
Next Austin Dillon Edges Joey Logano for AAA Texas 500 Pole